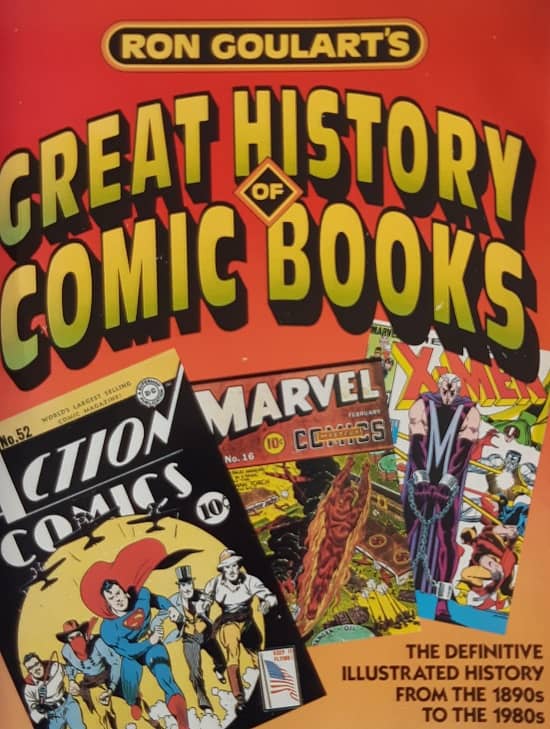 Two weeks ago, I blogged about my reread of Chabon’s The Amazing Adventures of Kavalier and Clay. Looking back on it, I’ve been consuming comic book history for about the last year.

After having my appetite whetted by Chabon for a bit more of the Golden Age of comic books, I pulled Ron Goulart’s Great History of Comic Books off my shelf and really enjoyed my evening reading. It’s a history book published in 1986, so while it has the disadvantage of being out of print (unless you buy second-hand books on Abebooks.com — I saw copies for $7), it has the advantage that Goulart himself started collecting in the early Golden Age in 1938 and spoke directly with many of the early creators to source this book. 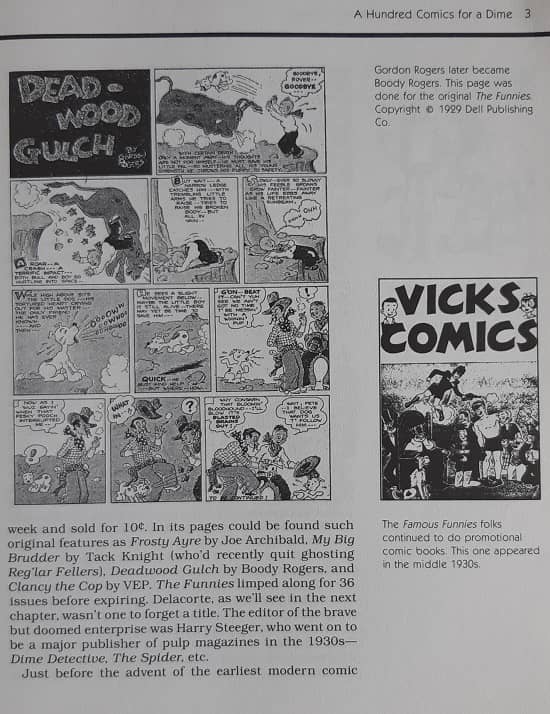 But Goulart doesn’t start in 1933, when the publication of the first thing that modern readers would recognize as a comic book. He goes into the ur-history of comics, which are the newspaper strips of the 1890s. These were the Little Orphan Annie, Mutt & Jeff and such funny strips. Publishers saw comics thriving in newspapers and started to try to monetize that popularity with reprints. And they did so, successfully, launching the world first real comic book in 1933, which seems to have been Famous Funnies, an entirely reprint book. 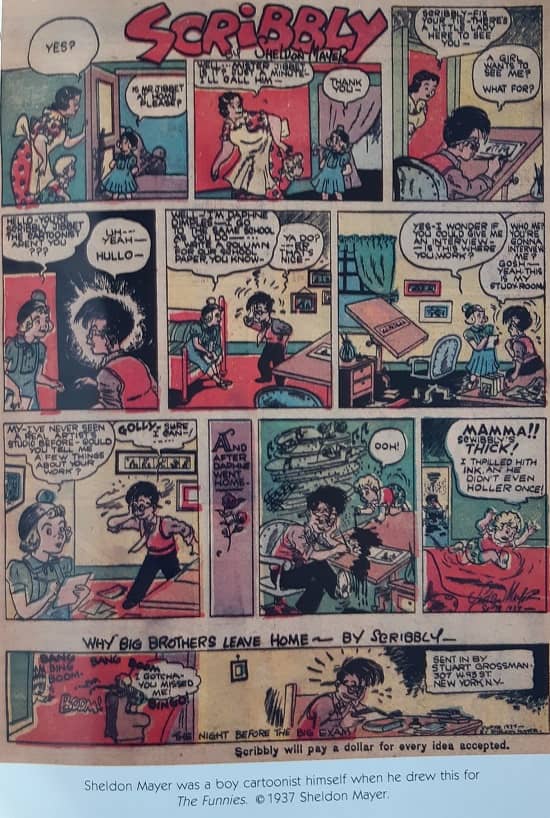 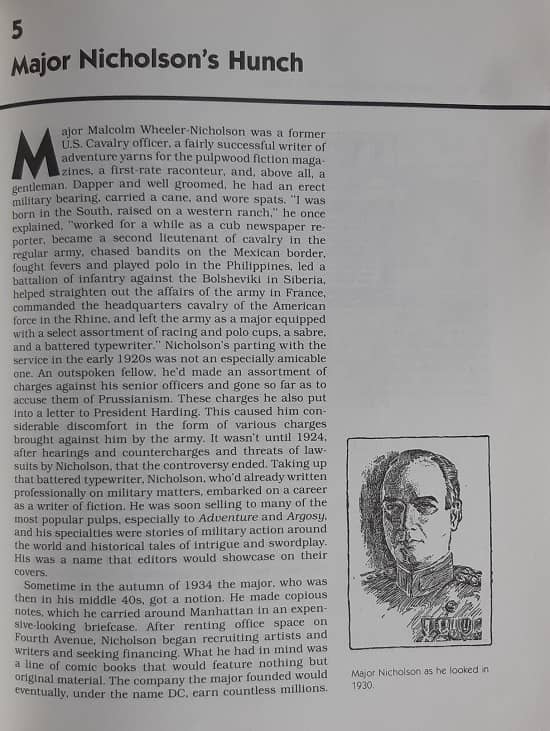 Goulart’s book goes into some of the personalities and the business risks they took, from those that panned out to those that didn’t. Major Nicholson, who founded Detective Comics and a few other titles never hit the jackpot. His comics were losing money and he sold his stake to the ones that would launch Superman and Batman and Wonder Woman only months later. 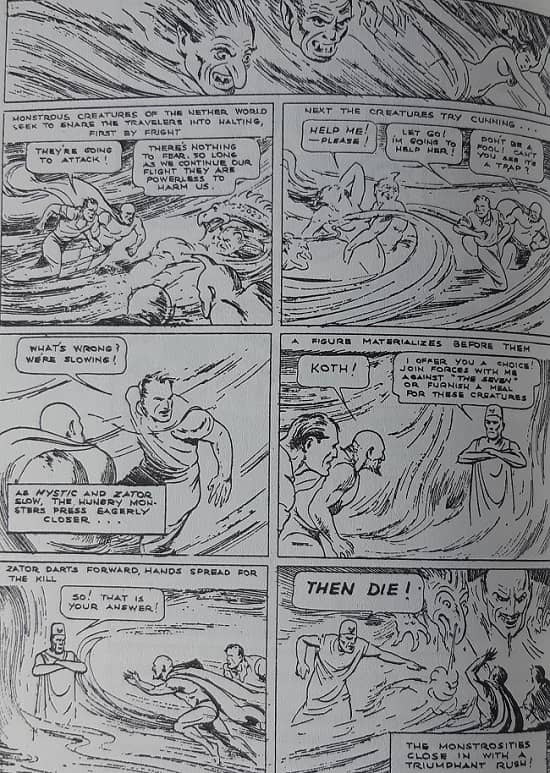 It’s neat to see some pre-Superman work by Siegel and Shuster. They worked on Slam Bradley and Doctor Occult, which did respectably well. I had forgotten that they were not inexperienced creators in 1938. 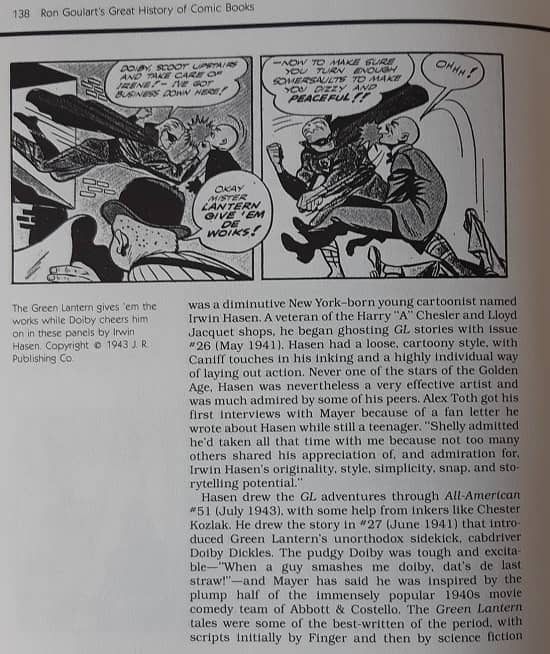 Goulart covers the early exploits of what would become DC Comics, from the inspired to the ridiculous. So many half-baked ideas were coming out that it makes you wonder if they were scrambling for the market or shooting in the dark or still grasping what it was that they were creating. It’s a fascinating few chapters and a wonderful dive into what would later become Earth-2 (in the pre-Crisis DC universe). 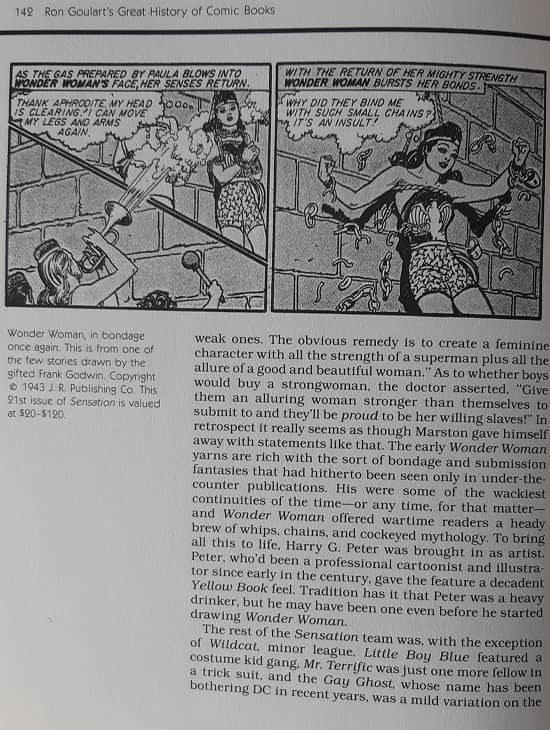 Equally fascinating are the competitors. Comic book imprints were springing up all over the place and creators moved to wherever the money was. 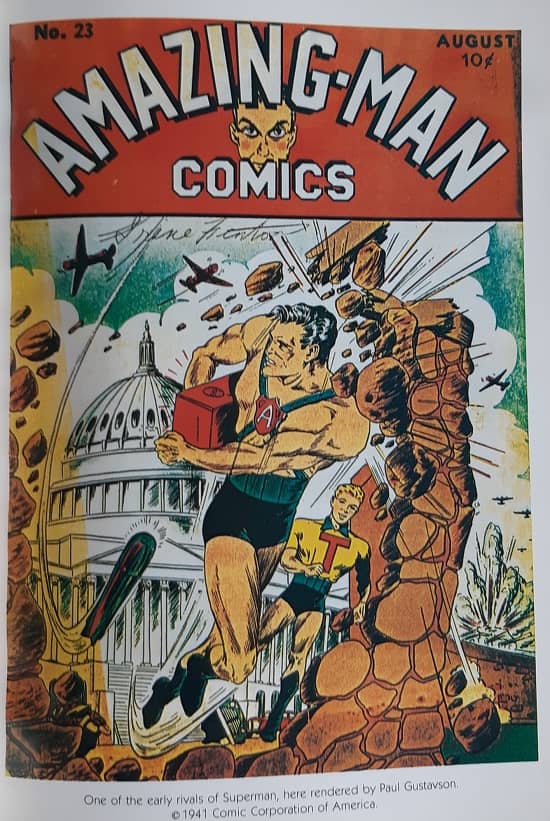 Marvel had its birth too, as Timely and then Atlas, and what surprised me in these chapters is how much of the early comic book superhero creation was essentially outsourced to studios who were selling to whoever would pay them. They would come up with a few heroes, do the adventures and then look for a publisher, and therefore a job if things sold well. The Depression still weighing on people, any job was better than no job, so creators worked insane hours for low wages because they had jobs. 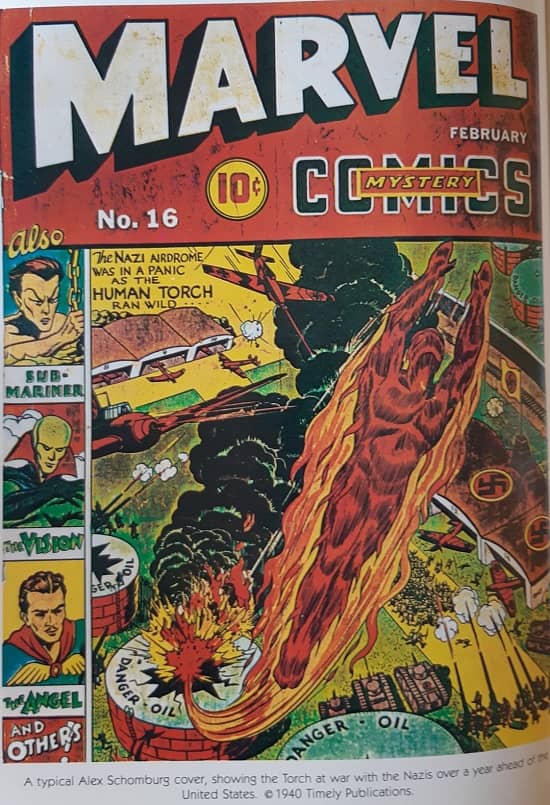 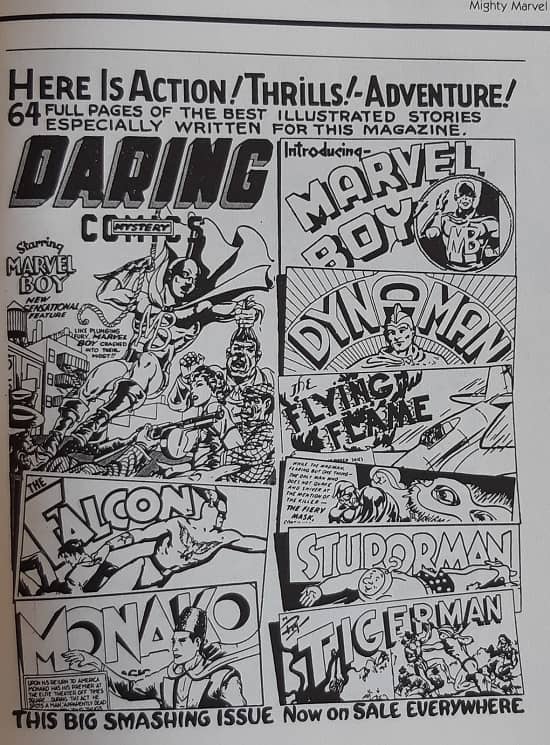 Superheroes were obviously not the only genre of story in comic books, and in those days, weren’t even the majority. Goulart walks the reader through all the genres, their ebbs and flows, replete with copies of art and explanations of the creators who invented all the worlds, whether crime, war, horror, romance, or other. I enjoyed that he traced back, as much as possible, the creative influences, especially the pulps. 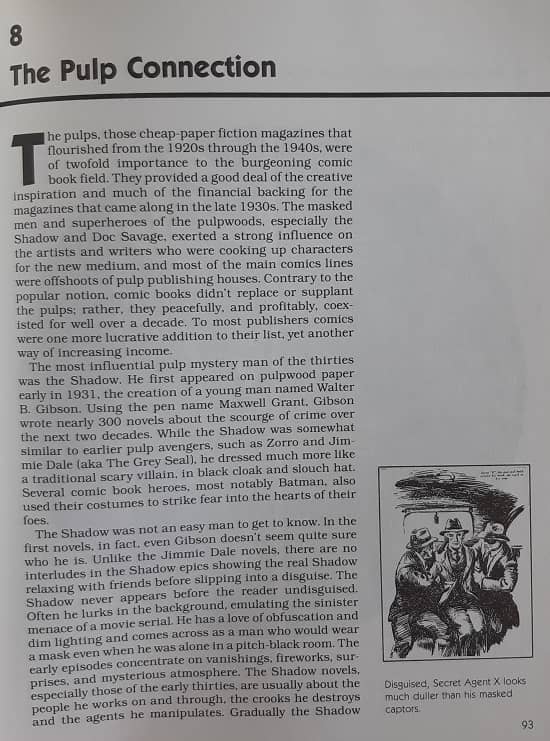 Goulart does such a good job on the 1930s, 1940s and 1950s, that most of the book’s 300 pages are done by the time we get to the silver, bronze and modern ages of comics, but I didn’t feel the lack. There are chapters on the major creative changes and the popularities of the characters, and their their creators. 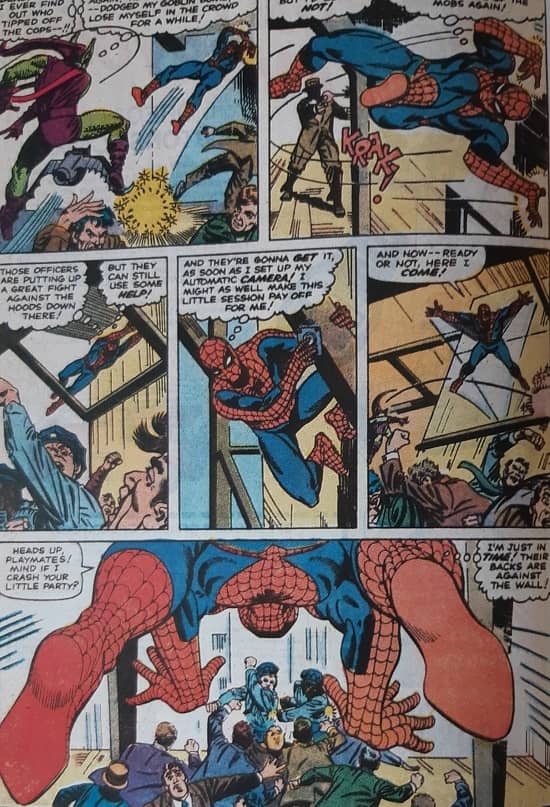 I didn’t feel the lack because the 1930s-1950s is so rich that another few books would barely have done the early years justice. Also, I have a history of the silver age of comics on my shelf and may talk about it another time. 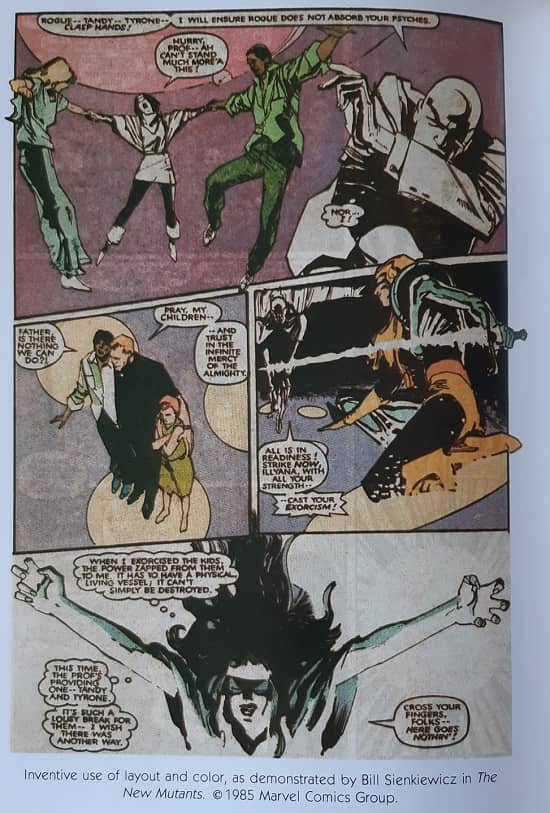 Goulart’s book was a fun dive into the origin story of a medium itself, and I highly recommend it. It is out of print, but online second hand stores keep books in a kind of perpetual “in-printness” if you don’t mind a few nicks in the cover.

Derek Künsken writes science fiction and fantasy in Gatineau, Quebec. His second novel (The Quantum Garden) will be in bookstores in October and is available for pre-order now. It’s a dark space opera Back to the Future with the characters who appeared in The Quantum Magician.

The History of Comics that Jim Steranko did in the 70’s is very much worth seeking out. He planned (I think) seven volumes but only completed two. Even the format is great – they’re enormous comic books (10 1/2 by 14 inches) with incredible wrap-around covers by Steranko himself. Because of the odd format, they may be hard to find in decent shape, but whatever shape you find them in, they’re well worth reading.

I probably should have been clearer – though the books look like comics, the history itself isn’t done in comic book form, though there are plenty of awesome comic art illustrations throughout. The work itself is primarily text.

I would like to get those two volumes of Steranko’s history! I’ve heard a lot about it for a long time and Steranko would have a pretty interesting perspective.