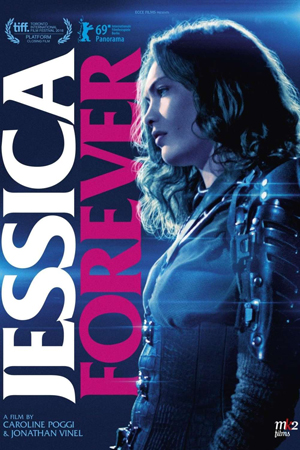 My first movie on July 30 was the first feature by two French directors of independent short films, Caroline Poggi and Jonathan Vinel. Jessica Forever, which the duo wrote as well as directed, is set in a near future in which disaffected and violent youth, mostly male, roam empty suburbs. The law hunts them down with killer drones, and the movie opens with a cloud of drones after one man, Kevin (Eddy Suiveng), who has squatted in an empty house. He’s saved from the law by a mysterious woman named Jessica (Aomi Muyock) and her squad of young men, who welcome Kevin into the fold.

Various bonding scenes follow, but the emotions of the group are odd: muted, to the extent they exist at all. The young men, each in their late teens or twenties, sleep in one room. All worship Jessica. Kevin makes a smooth transition to becoming one of them, training with them in the use of weapons and force. Then another flock of drones approaches, and there’s a surprising death, and the survivors have to flee. They end up on an island, where history risks repeating itself: some members of the group get too close to the locals. Will they find new allies? Or pull the attention of the authorities down on their heads?

The first thing to say about the movie is that it looks lovely. Images are nicely composed, the camera mostly still (it struck me at one point that it seemed to move more when Jessica was in frame, but I wouldn’t swear to that). There’s a kind of sterile perfection in the images of rich estates and partly-green suburbs, emphasised by the lack of people — we see cars and trucks in the distance, see a mall with passersby in it, meet a community on the island where Jessica’s group ends up, but mostly the world is empty of outsiders, of passersby or neighbours. There is a solitude here; a silence and a stillness.

Along with that there’s an affectlessness to both the characters and actors. There’s a blankness to them that’s maybe less an absence of emotion than an absence of a certain kind of social convention. You don’t know how to read them. This all fits perfectly well with the film’s set-up: these are young men gone wild, grown up outside of family or community, learning how to interact with each other. Their only guide, their teacher and parent, is Jessica. Who she is, and why she is gathering these men, is not explained; this is not the sort of film that explains these things. The important thing is that her relationship to her followers comes through, and for the most part it does.

I would go so far as to say that one of the most intriguing aspects of the film is the way it depicts its characters. These youths are convincingly violent, and many of them have done terrible things. But they don’t act the way this sort of character acts in virtually every other movie set in the contemporary world. These aren’t tough-guy hard men trying to assert dominance by busting each others’ balls. They’re quiet, if not reflective, and give each other space and respect. There’s a kind of alternative masculinity to these men, strong and capable of violence but not brutal. 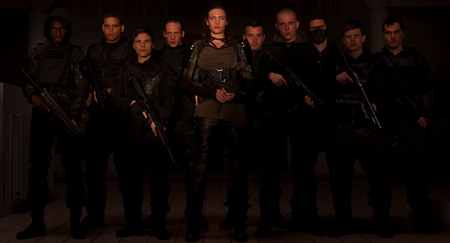 That’s a good idea that’s mostly played well, showing their limits as well their strengths, showing how they deal with loss and how the group deals with arguments among itself. And yet there’s a sense of something lacking. How these men got to be how they are is unclear, and how successful they are at building a new society is ultimately debateable. Jessica herself is an enigma, underplayed and underwritten to the point where virtually any meaning can be projected onto her. Is she Christ? Is she Peter Pan’s Wendy, or Pan himself? A Pied Piper? The ambiguity’s simply too overwhelming.

Also: I don’t think the film quite nails its attempt to fuse bits of action-movie plotting with a more symbolic approach. It’s difficult to take the group’s plans for finding bases or setting up their home seriously. Practical and tactical considerations (where does the electricity come from? Who’s watching out for drones?) are ignored. But the establishment of a home is a large enough part of the film — which, after all, opens with a man crashing into a house — that it demands a bit more realism than it gets in order for character and theme to cohere. At any rate, in the end the action scenes are minimal, and the film doesn’t quite become the slow burn that it might have been. The build-up isn’t there. In some ways that’s because the movie’s more interested in giving us moments of humanity among Jessica’s youths. But I’m not sure there are enough of those, either. 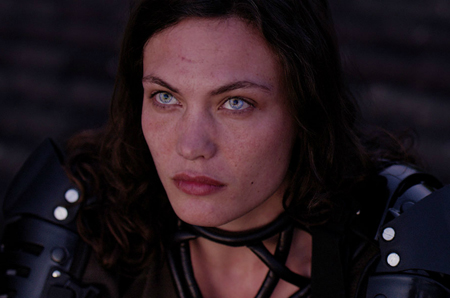 Poggi and Vinel are part of a movement that has produced a document called the Incoherence Manifesto. Jessica Forever doesn’t always adhere to the rules of the manifesto, which may be appropriately incoherent. But I note Incoherent auteur Bertrand Mandico has said that “To be incoherent means to have faith in cinema, it means to have a romantic approach, unformatted, free, disturbed and dreamlike, cinegenic, an epic narration. Incoherence that’s an absence of cynicism but not irony.” And it’s quite possible to see a lot of this in Jessica Forever. Romantic, yes, dreamlike, certainly, cinegenic in the sense of attractive to viewers, yes. Arguably the story has moments of striving for epic. What may be most significant, though, is that there is a distinct absence of cynicism. There’s irony in the unfolding of the plot, but not a cynic’s sense of pointless or of the inherent corruption of humanity.

But then if there is a sense of heroism at work in this film, it emerges only fitfully, and there’s not enough else going on to take up the slack. The movie is on a practical and thematic level simply too incoherent. Its ideas do not cohere into a meaningful story, and it remains less than the sum of its parts. There are lovely elements, as in the group’s expression of grief set against the music of Jesu. But not enough of them, and not really tightly building on each other. The ambitions of the film are intriguing, and it does some fine things. I appreciated it well enough while watching it. But it’s not one I feel I can easily recommend.

I had gone into this movie hopeful, but was quickly disappointed. While I suspect that a lack of context was part of the exercise, it diminished (to the point of evaporation) my ability to sympathize with these blandly attractive, gun-toting desperadoes.

Not that I much care to revisit this narrative universe, a prequel might be in order to explain Just What Happened. Though the nature of my work at 366 means I generally don’t care about the specifics, I can’t have been the goal of the film-makers for me to watch the emotional noodlings of murderers wondering whether A, they’d become sympathetic, or B, the movie would wrap up so I could move on to something more intellectually, emotionally, and narratively satisfying.

These guys kill. On impulse. That is on them. At best, they’re tediously semi-tragic figures; more likely, they deserve it every time a battery of machine-gun drones hunts them down.

As near as I can figure, the filmmakers are trying to present a kind of amoral world in which the bonds the characters have for each other is the only source of meaning. That’s a guess, though, and even if it’s accurate, you’re right that it doesn’t exactly encourage sympathy with people who don’t have empathy for those outside their own small group.