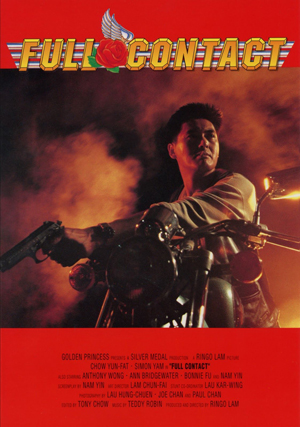 There’s still so much I don’t know about film, so many great movies I haven’t seen. Thankfully, every year Fantasia screens restorations and special presentations of a number of established classics (and semi-classics). I usually don’t have free time in my schedule to watch films I’ve already seen — I had to pass on First Blood to watch Why Don’t You Just Die!, while a presentation of The Crow later in the festival was up against something else — but early on July 29 I had an open spot to take in a film I’d never seen before: a 35mm screening of the 1992 classic by Ringo Lam (Lam Ling-tung) Full Contact. Lam passed away late last year at only 63, and so Fantasia honoured him with a presentation of one of his greatest works.

Written by Yin Nam, the movie’s about Jeff (Gou Fei in some translations, Ko Fei in others, played in any case by Chow Yun-Fat), a tough bouncer in Bangkok whose friend Sam Sei (Anthony Wong) went into debt to a loan shark to pay for Jeff’s mother’s burial. To pay off the debt, they decide to embark on a heist alongside Sam’s cousin Judge (Simon Yam). Judge has other plans. He betrays Jeff, and leaves him for dead. But Jeff survives, and as Sam rises in the underworld, Jeff returns seeking revenge.

And revenge he shall have. Full Contact is one of the late apotheoses of the 80s action movie, filled with snarling attitude and brutal gunfights. There’s a heft to the violence, a weight that comes only in part from the lack of CGI. Mostly it comes from acting and directing and writing. You feel anything can happen to any character at any time. Or at least anything imaginable in 1992; the film’s solidly of its time, to the point of opening with a dance sequence set to Extreme’s “Get the Funk Out.” Which, somehow, impossibly, works.

The movie moves well, building to set-pieces that send the plot off in unpredictable directions. The heist, for example, is the kind of action sequence other movies might make their grand climax. Here it’s more like the end of a long first act, twisting the story to set up the rest of the film. But the point is that it has its own logic and its own structure, with a car chase and a running gun fight and then a siege of a man pinned down inside a house. All of it’s clear, all of it fun to watch, and yet also oddly realistic; the gang’s small, and the violence is on a matching scale. 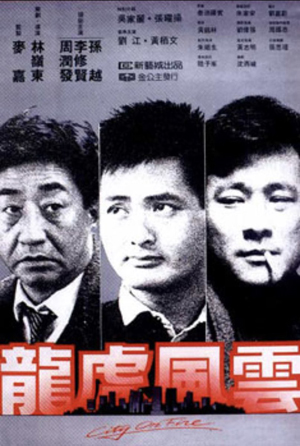 Still, it has to be said Full Contact bears some unfortunate marks of its era. Not in terms of its cinematography, but its narrative. Yam’s villainous Judge is gay, and this comes off as unthinking homophobia. (Although, admittedly, it allows for dialogue of unexpected cruelty — as, for example, the final line of the film: “Go masturbate in hell!”) There are two women with any amount of dialogue in the film, one a crazed nymphomaniac (Bonnie Fu, whose character is named Lau Ngang some places but was only named Virgin in the print I saw), the other Jeff’s girlfriend, Mona (Ann Bridgewater), who is drawn to Sam after the heist goes wrong. Bridgewater’s fine, but her character’s mostly manipulated or deceived by one or both men.

These things are notable, but in the way of classics they don’t take away from what really works. Part of what makes the film a classic, I think, is the way it balances excitement and cinematic violence with a kind of gritty realism in its action scenes. Jeff’s incredibly good at fighting and shooting and action-movie stuff, but he’s not mowing down dozens of thugs. The story’s focussed on a small number of characters: Jeff the revenge-filled good-guy force of nature, Judge the gleeful villain, and Sam who is caught between them. There is in fact a surprising amount of character work here for an 80s action movie. Lam, who had drawn attention with previous films such as 1987’s City On Fire and its sequel Prison on Fire, demonstrates his mastery not only of the cinema of ballistics, but also of how to get emotional power out of gunplay.

If all that’s part of what makes the film classic, what else makes it classic is Chow Yun-Fat. To my mind one of the most watchable movie stars of the past three decades, he seems almost uncomfortable at first in the role of a man well outside the law. In fact without his ability to project openness and decency, Jeff would be difficult to sympathise with. As it is, we feel for him, and specifically feel sad for the untrustworthiness of all the other characters in the film. They just keep disappointing Jeff. Of course he has to take action in consequence. As a storyteller, Yun-Fat knows when to underplay things and when to grab a scene and squeeze everything out of it that he can. Having worked with him on City and Prison on Fire, Lam knows to let him.

It’s possible to see some basic themes in Full Contact. There’s an exploration of duty, family, and responsibility to others. But these things remain mostly vestigial. It’s a movie about a wrong done to a man who returns that wrong with interest. The stakes are small; it’s a story about a struggle over money and weapons that can affect a single person’s life but will not change the world. But then, that’s part of what makes it work, the laser focus on a very few characters, the feeling of something close to what might actually go on in a big city’s underworld. There are physical consequences for violence in this film, something unusual in a lot of action movies. It’s far from a documentary, but Lam balances cinematic glamour with raw violence; balances characters responding to that brutality with the high-opera aspects of the revenge drama. I came in to Full Contact expecting a classic of its genre. I was not disappointed.

By far my favorite Hong Kong action movie. I love the rich characterizations and gritty action. Excellent performances all around. Plus, an awesome training montage showing Jeff preparing to go to war. Oh, and a really cute dog.

Yes, such a great movie, warts and all.

Le Samourai: Interesting observation! I’ve been wanting to try the Parker series, and this gives me another reason to get going on that.