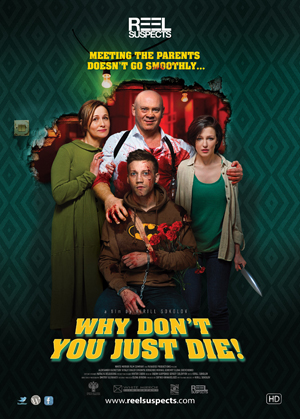 My fourth film of July 27 was once again in the Hall Theatre. It was a Russian film about which I had heard very good things, with one web site calling it among the best action movies of the year so far. You may have heard of Chekhov’s gun; well, Why Don’t You Just Die! (Papa, Sdokhni) gives us Chekhov’s gun, along with Chekhov’s other gun, Chekhov’s claw hammer, Chekhov’s power drill, Chekhov’s CRT TV, and any number of Chekhov’s other odds and ends.

Written and directed by Kirill Sokolov, the film opens with a young man before the door of an apartment, nervously contemplating the doorbell, a claw hammer clutched behind his back. His name is Matvey (Aleksandr Kuznetsov, Marten in The Scythian), and he has come to visit Andrey Gennadievitch (Vitaliy Khaev), the father of Matvey’s girlfriend Olya (Evgeniya Kregzhde). Matvey’s got a score to settle with Andrey, or thinks he does. There’s more going on than he knows, though, and after the opening tension explodes into violence things settle down only to open up as more and more characters get drawn into the confrontation.

The film unfolds largely within Andrey’s apartment, with flashbacks now and again showing us background that shapes what goes on. New wrinkles are constantly added, new aspects of character demonstrated. The plot takes on new shapes at unexpected moments. Violence is a leitmotif; beautiful, horrific, entertaining violence.

There’s a temptation to talk about Quentin Tarantino when faced with a violent but clever small-scale crime film. The sense of corruption is probably most like Tarantino; more than brutal men doing brutal things, there is here the feel of a tough world in which everybody’s out for their own interests. But then the characters also, most of them, have redeeming features, too. Goons are also friends. Sometimes. As a result Why Don’t You Just Die! feels more like an early Guy Ritchie film — the Guy Ritchie of Lock, Stock, and Two Smoking Barrels or Snatch, not the Ritchie of the Sherlock Holmes films. The film’s pacing in particular is like those movies, and how flashbacks are cut in after a bizarre or unexpected plot twist as a way of explaining the twist. But also how people do bad things for good reasons, or what they think are good reasons. 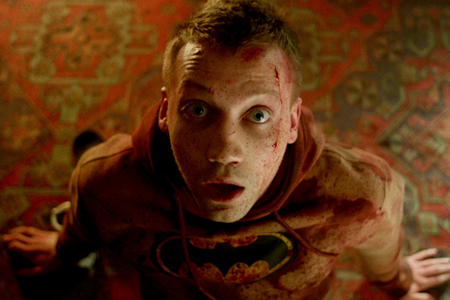 It’s important to say that this is a very funny movie. The timing’s impeccable, and it’s a treat for the eyes. The apartment location maintains visual interest throughout the film, which boasts an eye-popping colour palette. Framing is precisely correct, not just composing nice images but making the jokes land. The dynamic soundtrack’s a help too.

But of course what really makes the humour and the film as a whole work are the performances. Khaev builds a complicated figure out of someone who’s basically a villain. Kuznetsov demonstrates an incredible range. There’s quite a distance between the slick efficient warrior-assassin of The Scythian and the slightly slow but ultimately good-hearted Matvey — they stand differently, move differently, look at the world around them differently. His acting builds a distinct character here, then, and tells that character’s story.

Surprisingly, we feel some sympathy for all the characters in the movie while also seeing their flaws. This probably should not happen, given how nasty some of those characters are. But they’re all humanised to the point that one roots for them at least a little; they’re all the heroes of their own stories, and it’s natural to get pulled into a protagonist’s voyage.

At the same time, of course, the fact most of them are somewhat reprehensible makes it a lot easier for us to watch violence being inflicted on them. The movie plays expertly with audience sympathies as it moves along at a smart pace, doling out information and plot twists to move viewers first one way and then the other. It’s a tricky structure, but it works at every turn. 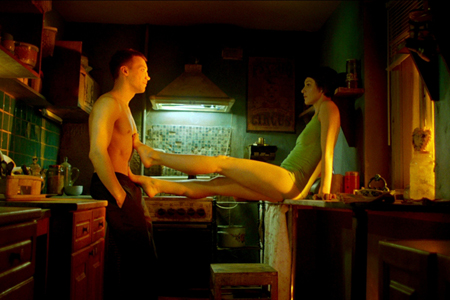 Theoretically, the violence should become numbing as the movie goes along. To an extent it does, but there’s enough originality and enough variety to the plot that new kinds of wounds are always being inflicted. I would say in fact that the distancing effect of the violence is used well, as part of the way the audience is hooked in to some characters and pushed away from others. It’s perhaps worth noting that the action in the film does slow down a little in the second half, but then it almost has to or else even the cartoony approach of the movie would become simply implausible. As it is, there are at least some visible consequences for the various wounds inflicted. Not as many as what actual human biology would suggest, perhaps. But enough to give the story weight.

It helps that in the end the story’s about something. The theme of corruption recurs through the film. A weakness in one character, shown in flashback, ultimately leads to other characters throwing their sense of right and wrong completely overboard. By the very end the one character who survives walks away from temptation, and if there is no reason to turn aside from the treasure that’s just sitting there, that is the point. It’s a little surprising, in fact, that a movie about moral greyness and corruption and dirty cops and the unyielding pressure of the world is in no way at all a film noir. There is a streak of morality similar to classic noir’s take on the wickedness of the world. But this is ultimately too different. Too colourful, too violent, perhaps too funny.

A friend of mine has a theory that Why Don’t You Just Die! is actually Russian propaganda, for all it shows a rotten society and villainous policemen; the idea is that it’s a movie about how much punishment Russians can take and still keep going. (“Russian machine never breaks,” as it has been said.) It was certainly a clear crowd favourite. It’s entertaining, clever, and well-crafted, with something to say and some fine performances. It’s funny, it’s exciting, and if you don’t mind watching a lot of bloody violence it is probably everything you could want in a movie.

Hey, there seems to be some over-lap in the observations in your review and mine. Almost as if we discussed the movie extensively afterwards.

The Guy Ritchie comparison is spot on; albeit “early” Guy Ritchie. I’m interested in further work from this new director — and not just because I think “Russian Cinema” has been overloaded with the beautiful-but-tedious Tarkovsky films that, among certain circles, are All The Rage.

Thinking back on it after all this time, I think there is only one wholly sympathetic character whose suicide is perhaps the only selfish act exhibited — albeit being done for understandable reasons.

Hang on, is that me you’re referring to in the final paragraph. It sounds like something I’d say…

It might indeed have been you that made the observation! It does sound like you. If you want to take the credit, go for it!