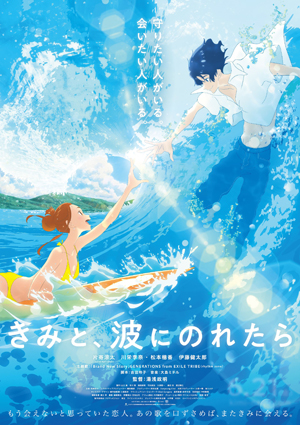 On Saturday, July 20, I was down at the Hall Theatre bright and early — relatively speaking — for an 11 AM showing of Ride Your Wave (Kimi to, nami ni noretara, きみと、波にのれたら), an animated feature from director Masaaki Yuasa. I’d seen two of Yuasa’s previous works, Lu Over the Wall and the excellent Night Is Short, Walk On Girl, and was eager to see what was in store this time around. As it turns out, Ride Your Wave, written by Reiko Yoshida, is a solid story that in a quiet way keeps doing unexpected things. It’s a romance, and then it isn’t; it’s a realistic story, and then it really isn’t. It’s a little reminiscent of Night Is Short, but is nowhere near as strange as that movie. Still, it does what it does quite well.

It follows Hinako (Rina Kawaei), a surfer and oceanography student, as she moves back to the coastal town where she lived as a child in order to go to university. There, she meets Minato (Ryôta Katayose), a young firefighter. They embark on an intense relationship — and then things go awry. It is in what happens next that the film perhaps gains its identity, though it’s worth preserving the twist that sets it up; enough to say that the supernatural manifests through water, in a kindly way. The question, then, is where the characters go, and particularly how Hinako will develop as a person.

That sounds vague, and Ride Your Wave isn’t. But it does take enough surprising turns it’s difficult to talk about as a story without giving away things better left to the film. So let me say this: it consistently nails the emotional tones it tries to evoke, and is a solidly-built story with a theme that slowly emerges of Hinako’s personal growth. It is a movie about her self-realisation, her coming of age, and it manages that in a surprising and touching way. It is a movie about sacrifice, and heroism, and letting things go, and it powerfully combines them all in Hinako’s story and background.

(I will note that there is one peculiar note. We learn something about how Minato and Hinako first met, or at least when they first met, that Minato knows but does not reveal to Hinako. It’s an odd choice to have him not tell her this thing, though it’s perhaps true that it comes to nothing. Still, it darkens Minato in a way I’m not sure was intended, turning him into a keeper of secrets, however benign.) 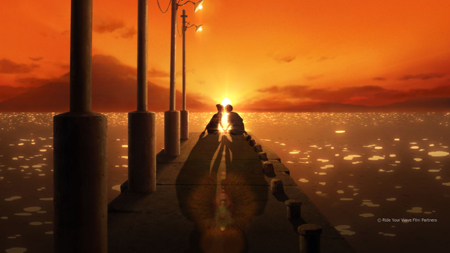 Visually, the film’s bright but not unrealistically so. There’s a healthy outdoor glow to the movie, to the everyday settings Yuasa brings to life. The sense of the seaside city as a real place with a coherent geography is strong, and perhaps more importantly, the sense of the community as having a specific pace to life is very good. There’s a distinct tone to the setting, and so somehow when the story moves a little past the everyday, it fits. There’s just enough stylisation that we have the sense of a unique world, a place that can build its own rules.

In terms of character design, this is a film where the leads seem built out of stringbeans, long and lean, their whole bodies expressive so that surfing or firefighting becomes an act of communication. They’re distinctive, then, and fit the world of the movie. In a basically realistic film, their body language, their physical communication, is crucial; and Yuasa’s designs and animation work. They feel natural, again a little bit beyond the norm but just enough to have their own identity.

The same might be said of the story, as well, but I was not convinced by the climax. The film rises to a big finale that is visually powerful, and entertaining in the moment, but which seems to push the non-realist aspects of the movie too far. It’s foreshadowed, and set up reasonably well (although part of the staging requires a character to try to take a photograph I’m not convinced was necessary, and also that she not call the police at a point where it clearly was). But the stunts demand a whole different set of physics than we’ve had up to that point in the film.

It is notable, though, that it represents one of the few moments of outright visual lunacy in the film. Compared to his previous films Yuasa’s toned down not just plot weirdness but also, and perhaps especially, the cinematic weirdness. There’s some value in showing one’s discipline as a storyteller, of course, and it’s interesting to see how straightforward Yuasa can be. I personally miss the extravagance of his earlier tales, but this calmer film does work; if anything, it perhaps should have been even calmer. 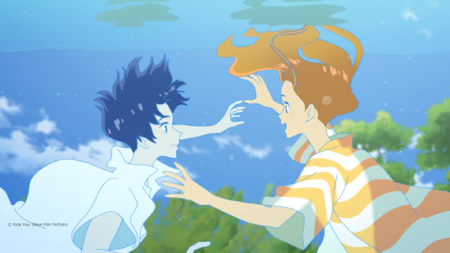 It is worth saying that it is a story that’s clearly best told in animation. When an animated film tells a mimetic story I sometimes wonder why not simply tell the tale in live-action; that isn’t the case here. Yuasa plays with water and fire in ways that would be very difficult to make work, and which seem to have thematic bearing on his story as well as giving it a specific visual identity.

At 96 minutes, the film doesn’t feel especially brief in part because of its tight focus on a small number of characters. Hinako and Minato are always front and centre, but two other characters — Minato’s quiet co-worker Wasabi (Kentarô Itô, seen last year in live-action in Room Laundering) and his sister Yoko (Honoka Matsumoto) — help move the main story along and also provide an interesting contrast. They balance the leads in interesting ways, and at least early on help complicate the romantic aspect of the film. We might assume that the movie’s setting up Wasabi as the character who’ll have a relationship with Hinako, but no, it’s Minato, and that subtle wrong-footing is something the movie handles well here as in other things.

Ride Your Wave is a solid film that perhaps will have a particular resonance for older teens but can be watched with pleasure by viewers both older and younger. It’s quiet in some ways, but effective. Elements of the supernatural or surreal are involved, and used well, but it’s a story primarily about this world and a young woman finding out how to be her own person in the world. It’s a movie that continually reinvents itself in subtle ways, and if it does not trumpet vast ambitions, it succeeds at what it aims at.

“When an animated film tells a mimetic story I sometimes wonder why not simply tell the tale in live-action.”

Unfortunately, the more common problem today is live-action (more precisely, a mountain of expensive CGI) being used to tell what are best as animated stories. Obviously the main (only?) culprit of this are the people at Disney re-treading a number of their classics, but as a single entity they’re large enough to have this be something of a “problem”.

I will complain only briefly with my remarks in this paragraph. You and I see enough movies at this Festival to know that there are countless stories out there that haven’t yet been told and the world doesn’t need updates to narratives that were already well-made. I am done complaining about the state of modern re-make / re-sequel cinema.

It’s a fair point, though, and relevant here. One of the interesting things about this movie is that it isn’t based on a pre-existing property. A lot of Japanese films these days seem to come from a manga, anime, or novel, so this was a nice surprise.