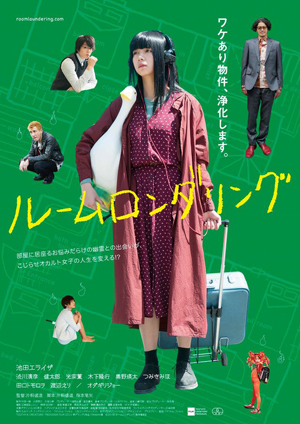 I had one film on my schedule for Tuesday, July 17. It was a Japanese movie called Room Laundering, which looked like an odd fusion of comedy and horror. I wasn’t too sure what to make of it from the program description, but sometimes it’s the films that don’t lend themselves to easy description that’re the most rewarding. And so here.

Room Laundering (Rûmu rondaringu, ルームロンダリング) was directed by Kenji Katagiri, and co-written by Katagiri with Tatsuya Umemoto. The father of Miko (Elaiza Ikeda) died and her mother vanished when she was a child; after her grandmother dies when she’s 18, her uncle Goro (Joe Odagiri) takes her in and she begins to make a living as a room launderer. Japanese law requires landlords to tell prospective tenants if the previous tenant of an apartment died through murder or suicide, which would tend to cut demand for the unit — but the law doesn’t say they have to tell any further tenant beyond the first one following the death. Thus, Miko: she takes the apartment for a couple of days, counting as a tenant and relieving the landlord of their legal obligation. One problem emerges, and that is that Miko can see ghosts. They’re not very scary to her, though, as they can’t really do anything to the physical world, and on the whole are sad rather more than angry. But they do ask her to do things for them. One middle-aged punk rocker (Kiyohiko Shibukawa) wants her to send in an old demo tape to a record company, which he didn’t have the nerve to do when he was alive. A dead woman not too much older than Miko (Kaoru Mitsumune) wants her to find out who killed her — and here a mystery plot emerges. But there’s another mystery, as well: what happened to Miko’s mother? And beyond that — what’s her uncle Goro hiding? And can Miko, forbidden by her boss from associating with her neighbours, make a connection with the shy young man next door?

For all the mysteries, though, and for all the untimely deaths, this is a surprisingly light and charming film. My first reaction after it was over was that it was an unlikely fusion of Le fabuleux destin d’Amélie Poulain and Ringu, but much more the former than the latter — it takes place in Japan, and there is a ghost that wants people to be exposed to a tape, but beyond that it’s much more Amélie, if slightly more melancholic. The world in this film is improbable and sad, but the people are often surprisingly supportive. Not universally, but frequently. And, crucially, there’s a sense of the absurd in which the film takes a kind of life-affirming joy. 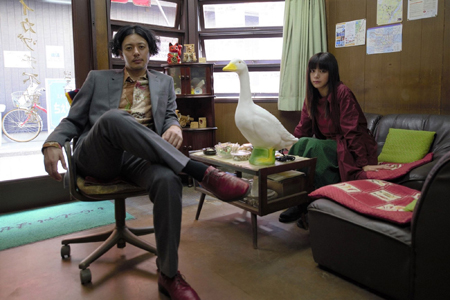 That feels well-earned because for a good while we’re not entirely sure what kind of a movie we’re watching. We’re not sure what the rules are, here. People are sad. There are ghosts, remaining from violent deaths. It’s pretty clear early on that this isn’t going to turn into a splatter-horror film, but beyond that, how sure can we be of what will happen? The comedy’s constant but for most of the film fairly low-key if absurdist. The ghosts are probably the most bluntly comedic part of the film, with Shibukawa’s punk played the broadest — so that when we touch on the sad life leading up to his suicide, we feel it the most. It’s a movie that uses genre ambiguity to its profit.

What really makes it work, of course, are the characters. Miko, trudging from apartment to apartment with few earthly possessions beyond a duck-shaped lamp that occasionally flickers to life in the presence of ghosts, is a memorable figure visually as well as narratively; acerbic and frequently unsympathetic at the start of the film, she’s so clearly struggling with her past that her development over the course of the story feels less like change than growth into what she always should have been. Meanwhile Goro, always rumpled and unshaven, manages to be both unpleasant (when he’s scheming to drive an old woman from her home, say) and sympathetic (when we find out why he agreed to take Miko in, for example). We care about these people, we want to know what’s going on with them, we want to find out what happened to make them this way. We want to see the worlds of the living and the dead set right. The acting’s very fine here, with both Ikeda and Odagiri standouts. Ikeda gives Miko her own integrity while still allowing her to be approachable to an audience, while Odagiri fashions a character that reads as both shady and, ultimately, admirable — sometimes for the same actions. 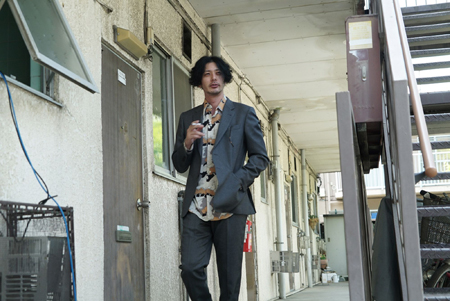 Some of the individual plot points are predictable, but the variety of plot threads keep things engaging, and this is ultimately a character-centred movie. From that point of view, the drama’s rich enough to work, while the comedy consistently illuminates character rather than distracts from it. Philosophical speculations about the afterlife aren’t the point any more than flashy special visual effects: there’s enough of both to serve the story. This is, though, a movie that looks very fine in a low-key way, to my eye lingering on faces more than places, ironic given that the premise seems to imply a range of architecture. In fact, it seemed to me that the two or three apartments we see aren’t much different from each other. There’s a sameness to their identity perhaps reflecting a deadening lack of distinction among their inhabitants. The movie dwells among urban solitaries and outcasts; not the really indigent, but the isolates within an apartment complex. It’s a film not about poverty in a material sense so much as poverty as a kind of isolation. Mitsumune’s dead businesswoman was a cosplayer, and that feels significant — that she had to take on another identity to connect. Miko begins the film sullen, hardly speaking, blocking out the world with a set of massive headphones. Her growth, slow and unpredictable but convincing, is the heart of the movie.