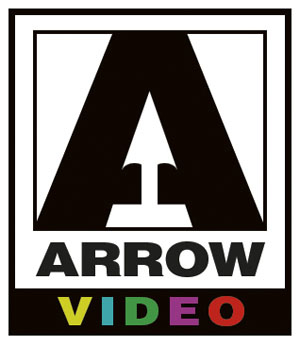 Before my second film of July 18, a surreal science-fiction movie from the director of Crumbs, I had time to catch a panel discussion. Returning Life to the Departed: Adventures in Genre Cinema Restoration was moderated by Heather Buckley, producer of films and of DVD supplements, who introduced David Gregory of Severin Films (also director of Blood and Flesh: The Reel Life and Ghastly Death of Al Adamson, which Buckley produced), Joe Rubin of Vinegar Syndrome, and, by Skype, James White of Arrow Films. All those companies preserve, restore, and reissue vintage genre, exploitation, and cult movies.

I’m not going to go through the entire panel because it was filmed, and you can find it on Fantasia’s Facebook page. I do want to note a few highlights. Buckley asked the panel at one point how their restoration process evolved and how they did what they did, and Gregory made the point that there was no one way to restore a film as it had to depend on what materials of the original are available. Sometimes those materials might be so bad that the film might look like it wasn’t worth putting out (he cited The House on Straw Hill), but the flip side is that those materials will only get worse until the film is lost (for Straw Hill he talked about cobbling together a version from two prints and a mold- and water-damaged negative). The ideal was to work from the original camera negative or something that had been protected in a lab. Rubin agreed, but noted for exploitation films the negative often doesn’t exist. Every project will have its own issues and shortcomings and things the restorer will have never had to deal with before. He talked about how low-budget movies did not usually get to have a timer sit with the cinematographer or director when the first prints were made to make sure the film looked right. Gregory noted that often the director or cinematographer will often say that a restored film is the best that film has ever looked. 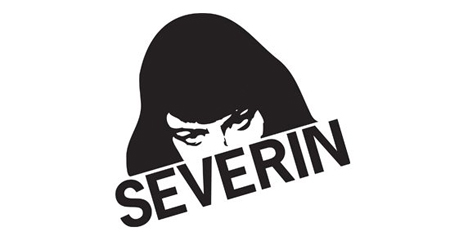 Asked about discoveries they make when restoring films, Gregory said that people who see Severin films often say ‘this film has no right to look this good’ — “but that’s not true,” he added, noting people went to a lot of effort to make the movies and make them look as good as possible. People just aren’t used to these low-budget movies looking so good. There was considerable discussion about how to be sure one had the full version of a film, and whether a given film reflected the director’s preference, particularly with respect to films with alternate versions produced for different markets. To ‘restore’ a film implies bringing it back to some prior ideal state; is that the best practice, or is it better to make the best match to a director’s intention as possible? Waterworld was an example that White discussed of a movie that had a number of different versions to choose from.

Buckley asked why the mainstream seems to be pushing “the things that we love” aside when they’re part of film history and often part of people’s lives. Gregory said that he at least didn’t want to be part of the mainstream — so he’s prepared to do stuff that will upset the mainstream or be brushed aside by the mainstream. Fans of the cult material, at least, want to stand up for it.

Asked about restoring material in 4K versus 2K, Gregory said it was a question of time and cost; cost has to be taken into consideration by a small company dealing with movies that will make little money. Buckley asked about the cost difference, and Rubin said it varied with each movie, and noted that the question of whether his company had the permanent rights to a movie (as opposed to holding them for a limited time) affected whether they’d be able to restore it in 4K. White added that there would also be the factor of whether the original negative existed; if no, would there be any benefit to doing a full 4K restoration? He said that if they did get access to an original negative, it only made sense to at least scan it in the highest possible resolution, in case it went missing at some point, and to ensure nobody would “have to bother” that film for a couple of decades. It was a fascinating discussion filled with interesting asides. 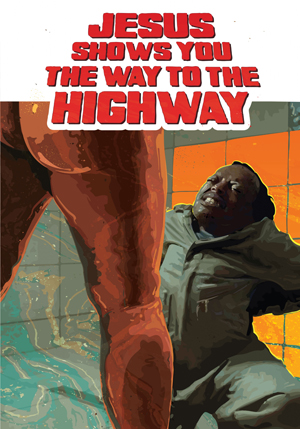 From the York Amphitheatre I crossed the street to the De Sève Theatre, and settled in to watch Jesus Shows You the Way to the Highway, the second feature film from Miguel Llansó. Daniel Tadesse, star of Crumbs, plays D. T. Gagano, agent of the CIA. With partner Palmer Eldritch (Agustín Mateo) he’s assigned to enter PsychoBook, a sophisticated kind of VR cyberspace, and stop a virus named “Soviet Union.” They do, but this is just the start in a deeply strange film. The virus wants to make a deal. Gagno wants to retire, and his beloved wife Malin (Gerda-Annette Allikas) wants to open a kickboxing academy. Then Gagano gets trapped in PsychoBook, in “Betta-Ethiopa,” where he must fight the President (Solomon Tashe), known as Batfro. But what to make of the strange messianic cult in the background?

All this, and I haven’t gotten to the Shaolin monk. But despite the many strangenesses and plot twists and unexpected elements the story accrues, the plot is more-or-less straightforward. Characters have recognisable motivations and act on them. It’s surprisingly satisfying as a straightforward story, though it’s told in such an unusual way as to be parodic. But I’m not sure parody is the whole point.

To try to explain the tone and style, bear in mind that in parts of PsychoBook, characters aren’t filmed normally; they may be filmed in stop-motion (that is, regular human actors filmed in a stop-motion technique), and wear cardboard masks over their actual faces: Richard Pryor for Gagano, Robert Redford for Eldritch. The CIA who give Gagano and Eldritch their orders are based in Tallinn, Estonia, in 2035, but their equipment looks like a (pre-Matrix) 1990s idea of what cyberpunk technology would be. There comes to be an explanation for that, as the movie goes on and we get a better sense of the different levels of reality at play.

Still, by that point we’ve seen the President of a country who runs around in a knock-off Batman suit (the Bat-logo digitally pixelated out). And we’ve seen Gagano reduced to a face on a small CRT TV screen. We’ve seen stylised acting, and guys in alien bug suits, and a master villain in a cardboard Stalin mask. All this in a movie that’s only 83 minutes long; idea after idea in a relentless flood.

It’s not so much sending up a specific kind of film as it is sending up almost every kind of film, all at once. All the pop-culture detritus of the twentieth century puréed and reconstituted as something different. Yet it’s straight-faced; the genre plot structure is coherent by its own lights, and there’s no mugging for the camera. This isn’t a straightforward comedy, but something much stranger. 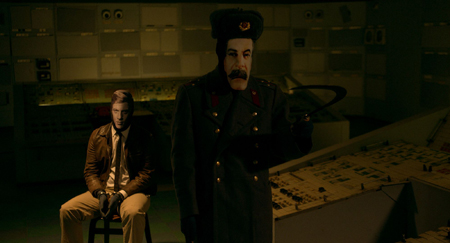 The reference to Palmer Eldritch, he of three stigmata, is appropriate. There is a Philip K. Dick–like play with levels of reality and with a cult that may hold an existential truth. But there’s also a strong sense of genre energy, the kind of thing that Dick was able to use at his best to give his tales some kind of coherency. Where the film is unlike Dick is in having some detachment from the material, even a sense of control.

This may in fact be the movie’s weakness: that it is too controlled, too easily understood. The plethora of concepts and plot twists are surprising and engaging, but the overall story (at least at one viewing) feels neatly wrapped-up. You understand basically what was happening and why, and it might be that having a few more open questions would have made the film more memorable. By the end, it feels as though reality’s been asserted — there isn’t the uneasy sense that I find in a lot of Dick’s work of a more profound truth outside and beneath the structures of the story.

On its own terms, Jesus Shows You is entertaining and original. Thematically it has things to say about reality and perhaps about power, with various entities trying to enforce their own reality on the world while Gagano tries to make his way through to survive with Malin. The problem, if it is a problem, is that the movie feels as though it’s all surface. Visually stylised without being especially engaging, it avoids the meditative or atmospheric. Things keep happening, and it’s hard to tell the difference between the significant and the trivial. 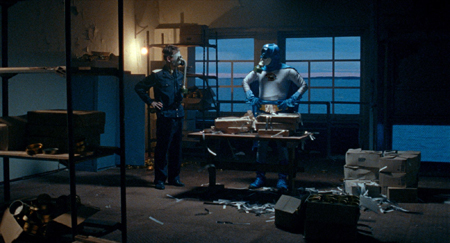 I don’t think the film itself is trivial, though, and not just because of the quality of invention. It does feel like a deeply idiosyncratic vision. It is something unlike anything else I’ve seen. If the ending’s wrapped up a bit too neatly, there’s a strong argument that the movie’s all about the journey, not the destination.

I will note that the cast’s just right for their roles. Which is to say that most of them are a little off, but in the right direction. Tadesse’s a sympathetic figure, increasingly put-upon and suffering under the various realities he’s caught within. Most of the rest of the cast are slightly wooden, slightly stagy, in a way that emphasises the unreality of the film. In context, it works.

Jesus Shows You the Way to the Highway is a hard film to write about because it’s hard to describe its overall effect. I liked it a lot, while also feeling it shoud have added up to something more than it did. And at the same time I thought it was one of the most bafflingly creative stories I’ve seen in a very long time. It’s a completely different creature from Crumbs, Llansó’s first feature. But it’s at least as engaged not only with science-fictional ideas, but with science fiction as a genre. For all the parody in it, to me the engine that drives the film is SF by way of Philip K. Dick. Only it’s given a frenetic make-over with modern media consciousness and an international sensibility. I’m still not entirely sure what to make of this movie, but I’m glad it exists. 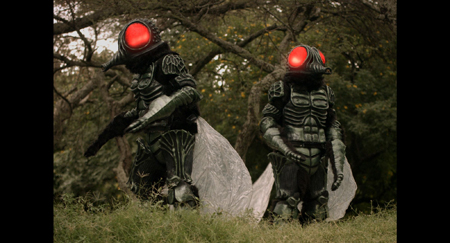 After the film director Miguel Llansó took questions. Fotunately, the indispensable Giles Edwards of 366weirdmovies.com was present to record it. You can hear the Q&A here or on YouTube, and it’s worth listening to for anyone who gets to see this movie. I’ll particularly note here that Llansó said that the film script went through 30 or 40 drafts; and that his inspiration for including masks of stars like Robert Redford came from dealing with producers who wanted stars like Redford in the movie. Which goes to show, I suppose, you have to be careful what you ask for.