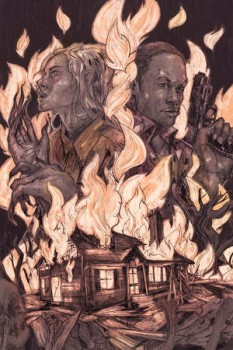 You’d think stepping away from a regular column reviewing would make writing a new review easier, but apparently not. I’ve been struggling with how to start talking about A.C. Wise’s Catfish Lullaby because the first thing I want to start with how I didn’t get the story I expected from the back-cover blurb. But that sounds like a criticism, and it really isn’t; I loved the story I got, which feels like a tonal blend of Stranger Things and Netflix’s Haunting of Hill House, set in the Bayou with more diverse characters.

Maybe we base too much of our expectations on the blurb. Lullaby’s focuses on Lewis, a “town of secrets,” and the character Caleb stepping into his father’s role of sheriff to unravel the mysteries of the Royce family and legendary monster Catfish John. That sets the expectation that you’ll mostly follow adult Caleb as he deals with his past. Instead, the novella spends most of its time on young Caleb, affected by the Royce family’s traumas and getting to know Cere, the youngest Royce child and survivor of her family’s apparent destruction, only moving ahead to adult Caleb for the last third.

Normally that sort of long dwelling on a character’s past would throw me, but not the case here. Wise builds this ongoing mystery that’s compelling, I think, for two reasons. One is the way that Caleb struggles to make sense of what’s affecting Cere and how to help her, as well as dealing with 1980s and 90s prejudice and later living up to his father’s name. He has a genuinely pre-teen attitude that most writers can’t pull off. He and Cere are immediately interesting and likeable characters, and so I kept reading to see what choice they’d make, regardless of whether the mystery got solved.

The other is the tangential way that Wise focuses on Catfish John, despite the novella’s title. Instead of being a story focused primarily on unraveling that mystery, Lullaby focuses primarily on character. The mysterious Swamp Thing-esque resident of Lewis stands mostly on the outside, more like an elemental force than anything else; we never get a concrete answer about what he is, or whether he’s good or evil, because the story is never as much about him as it is Caleb and Cere.

Things like Cere’s supernatural abilities and the apocalypse she’s supposed to stop don’t really get explained, either, but those unanswered mysteries are the mark of an excellent novella. It’s meant to be more short story than novel, so we don’t need all the answers. What we need is a satisfying, believable story with engaging characters, and that’s what Wise delivers with this weird, suspenseful tale.

Like podcasts? Check out “Broadcasts from the Wasteland,” where you can eavesdrop on Brandon and co-host Evan May chatting with authors like Kelly Robson, Marie Bilodeau and Kevin Hearne. New episodes coming in September! broadcastsfromthewasteland.com