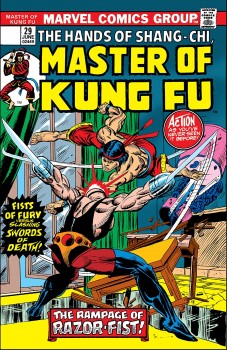 Master of Kung Fu #29 was the beginning of the much-promised new direction the series would take. Having carefully established warring factions of the Si-Fan with loyalties divided between Fu Manchu or Fah lo Suee, writer Doug Moench and artist Paul Gulacy now set aside this key storyline they had developed and expanded since replacing Steve Englehart and Jim Starlin on the book and took Shang-Chi in a decidedly different direction, albeit one that would guarantee the series’ longevity.

While Moench had taken pains to ensure a greater fidelity to Sax Rohmer’s work, he would still deviate from it at key points. Part of this was in shaving twenty-some years off the back continuity inherited from Rohmer to make elderly characters like Sir Denis Nayland Smith and Dr. Petrie a bit more viable in the 1970s than they would be as men who should have been in their nineties. More importanly, Moench chooses to make Petrie an MI5 agent the same as Smith rather than simply Sir Denis’ lifelong friend and amanuensis.

Shang-Chi is summoned to Sir Denis’ New York estate where Black Jack Tarr and Clive Reston have already gathered along with Dr. Petrie. Smith offers Shang-Chi a place among his operatives in taking down heroin dealer Carlton Velcro. Reston is the key man in the operation as he has taken the identity of Mr. Blue, the New York connection in Velcro’s heroin pipeline. Reston’s personality has been softened to make the character more mature and more of a team player with Tarr, Smith, and Petrie.

Shang-Chi is torn between his pacifist philosophy and his trust in Sir Denis as a good man who desires to eradicate evil from the world. A visit to a Manhattan rehab clinic is enough to convince Shang-Chi that stopping the powerful heroin dealer is justification enough to use violence against the greater social ill. Of course, this Machiavellian decision is one that will bring Shang-Chi much grief. It is to Moench’s credit that the reader immediately understands that choosing to be a hero brings Shang-Chi closer to the the philosophy his father has embraced – a philosophy Shang-Chi has sworn to reject. Choosing Sir Denis as a father figure illustrates that Shang-Chi, like the traditional reader of Rohmer’s Fu Manchu series,  fails to perceive just how much of a mirror image Sir Denis is to his venerable foe.

For his part, Carlton Velcro is a true Bondian villain living in a heavily-guarded island retreat packed with gorgeous women, his own private army, a pit of hungry panthers, a Bondian henchman called Razor-Fist, and a treasure trove of heroin. There is little doubt that Velcro suspects Clive Reston is not Mr. Blue as he claims when he arrives on the island to deliver a briefcase full of French currency as downpayment on the heroin. Smith and Petrie have planned out the commando raid to the second with Shang-Chi and Black Jack Tarr infiltrating the island retreat by parachuting from Smith’s plane into the ocean. To Moench’s further credit as a writer, nothing in this 007-style operation goes as planned. 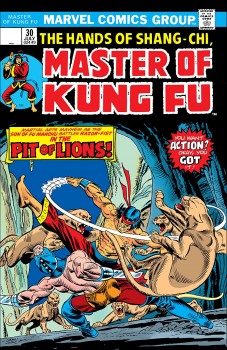 As soon as Reston steps into action to locate and destroy the heroin supply from within, Velcro has detected his betrayal and immediately dispatches armed guards. Consequently, Velcro’s men are on the alert and Shang-Chi and Black Jack Tarr surface to machine gun fire from the beach. Sir Denis’ expected diversion has gone awry and, in an era decades before cellular technology, he and Petrie are left in the dark as to how the operation has faltered. Master of Kung Fu #30 sees Shang-Chi come face-to-face with Razor-Fist. Since the series’ inception, the creative teams have struggled to create a foe worthy of Shang-Chi — they finally succeed with Razor-Fist who is a true killing machine, though still very human.

Shang-Chi’s fight with Razor-Fist is a brilliant setpiece in that it avoids all of the usual trappings of the outmatched hero out-thinking the unstoppable henchman and demonstrating his superiority. Their match is as methodical as Reston and Tarr’s chess game in the previous issue. Two opponents perfectly suited to one another guarantees only that the outcome hinges on the first to demonstrate human error. Gulacy’s art and Moench’s economy of words perfectly convey tension and suspense. The fact that Gulacy’s portrayal of Shang-Chi was frequently modeled on Bruce Lee’s physicality and features only adds to its success.

Tarr comes to Reston’s aid, but the two are quickly taken by the superior force of Velcro’s men. One of the strengths of the issue is as soon as one character comes to another’s aid, they both end up imperilled. It happens first with Tarr and then with Shang-Chi when he attempts to liberate his friends. What follows is really no different than the cliffhanger thrills of a 1930s serial, but pulled off with a level of sophistication that masks its origins. The shock ending of this middle chapter is that Carlton Velcro’s heroin operation is revealed to be a front for the para-military nuclear base located beneath the island’s surface. 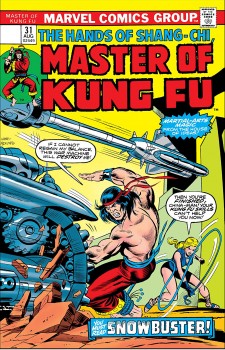 Master of Kung Fu #31 is the conclusion to the story arc and sees Shang-Chi, Black Jack Tarr, and Clive Reston’s improvised commando raid on Velcro’s nuclear base coming off much more successfully than Sir Denis’ carefully-calculated raid on the heroin dealer’s island retreat. This doesn’t really require a suspension of belief on the reader’s part for Velcro had every reason to concentrate his security efforts on the surface in the belief that his underground operations were impenetrable. The villain’s dismay at how the trio have discovered his secrets and threaten to destroy all he has worked to build is as refreshing as it is amusing.

Shang-Chi leaves the safety of the armored war machine to try to spare the life of Razor-Fist in a nice demonstration of his character’s values. This act of mercy leads him into direct conflict with Pavane who he treats in a fashion that shows he views her as an equal and, as such, he shows no quarter. Following quickly on their disturbingly violent exchange, Razor-Fist turns up seeking revenge. The irony that the man Shang-Chi risked his life to save now seeks to murder him is particularly bitter following his rough handling of Pavane. Carlton Velcro and his soldiers prevent Razor-Fist from getting his rematch and demonstrate the value heroin dealers and military leaders alike place upon human life. Moench’s script is sheer brilliance as the book is now easily matching Marv Wolfman’s best work on Tomb of Dracula during this same period. The story careens wildly to a fiery conclusion with Shang-Chi’s near act of self-sacrifice redeeming his actions…for the moment. 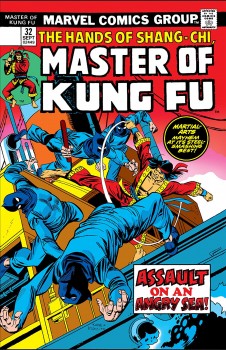 Master of Kung Fu #32 offers an interesting interlude before the linked three-part story arc that follows on from the team’s encounter with Carlton Velcro. In truth, the issue shows all the signs of being a schedule-driven filler from the substitution of Sal Buscema for Paul Gulacy to Doug Moench’s somewhat overdone Agatha Christie-style mystery. The story is set on a passenger ship and sees Sir Denis, Black Jack Tarr, and Shang-Chi set to protect an MI5 agent carrying secret documents. The question is not only who can’t they trust, but who are they supposed to protect as the agent’s identity is also a secret to our heroes. Is it the attractive blonde blind woman? Is it the aloof and aristocratic European? Passengers and crew alike are suspect, even the Captain. It’s not a bad little mystery at all, but it is clearly filler thrown together quickly. Buscema tries hard to not make Shang-Chi resemble Conan the Barbarian (drawn by his older brother John during this period) in every panel at least.

A similar piece of filler of note could be found as a support feature in Iron Man Annual #4 and that was The Man Called Midnight. Shang-Chi’s adopted brother was given his own back-up feature courtesy of writer Roger Stern and artist Jeff Aclin. Set in Singapore 1971, Midnight attempts to recruit a minor Iron Man villain of the 1960s, Half-Face to work for Fu Manchu. There is not much to the story, though Midnight is given ample opportunity to demonstrate how much the character owes to The Shadow. Half-Face’s refusal to join the Si-Fan sows seeds of doubt in Midnight’s unquestioned loyalty to Fu Manchu. Roger Stern, at least, would go on to an impressive career at Marvel as both a writer and editor.

I remember the Midnight story from Iron Man Annual #4. I always thought that Midnight could’ve been used more in MoKF, albeit he needed a better costume.

Thank you as always, Deuce. And thanks for the greetings relayed by our mutual friend, the redoubtable Dr. Holmes.