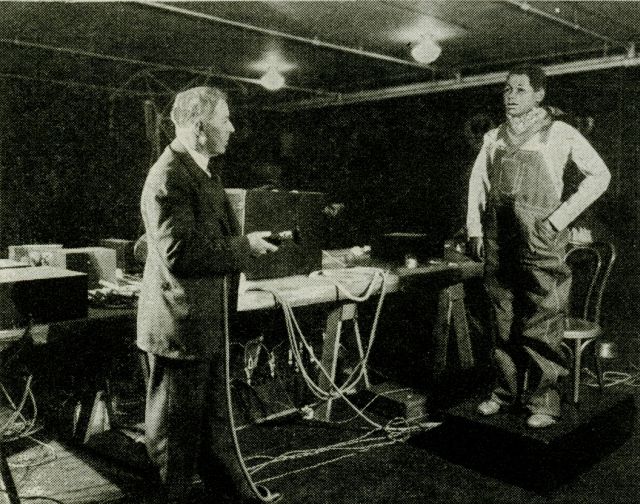 In the 1920s, the Westinghouse Electric and Manufacturing Company became the world’s leading builder of robots, purely by accident. Nobody at Westinghouse ever intended to build a robot, nobody thought that doing so would be anything other than a waste of their time. Then one of their employees, Roy Wensley, came up with a nifty gadget. He figured out that by sending sound tones down a telephone wire, they could activate machinery at the other end, having it either turn on or off or send back another set of tones conveying information about the system.

The control equipment fit into two boxes, one smaller than the other. Stacked, they looked a bit like a human head and torso. Prodded by the public relations staff, Wensley dressed the box front with a cardboard figurine, including a cartoon face, and movable arms and legs. Presto! Televox the Westinghouse Robot splashed all over the media in 1927, the first robot to become a household name since Percy, star of the comic strip of the same name, rocketed to fame in 1911. 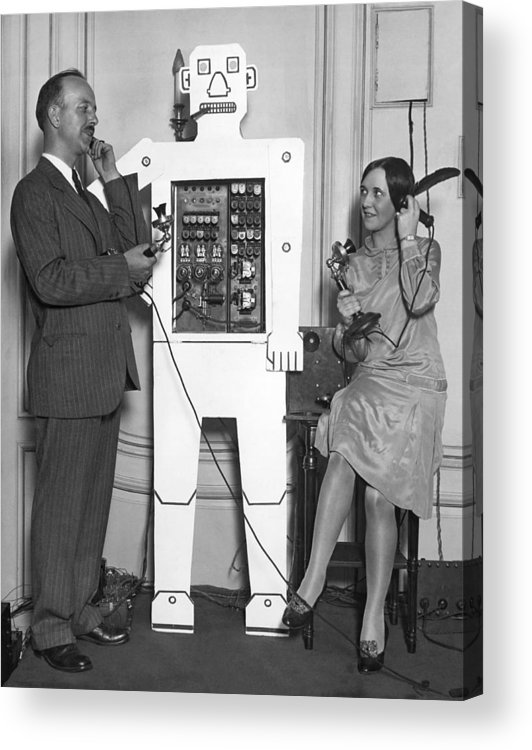 Even back in the twenties, wireless machinery had obvious advantages over systems tethered to wires. While Wensley was on an endless publicity tour, Westinghouse research manager Samuel Kintner and Dr. Philip Thomas, a member of his staff, worked on using photo-electric cells to receive light beams as a substitute for sound over wires. In 1929 they debuted Telelux, a “brother” to Televox: (“vox” for sound; “lux” for light).

Telelux did not get the publicity treatment afforded Televox. In fact, I have yet to find a single picture forthrightly captioned Televox. I know of only two photos that I assume are of Televox by inference from the accompanying articles.

The two photos are clearly of the same robot and same model, even though the first is labeled “Mr. Robot” by the newspaper. The pictures were taken on June 17, 1930 in the Italian Room of the St. Francis Hotel, host to the banquet for the National Electric Light Convention in San Francisco. (New robots were almost always debuted at some trade convention, just like any other new machinery or for that matter, new appliances. Westinghouse had just introduced a “sister” to Televox named Katrina, who toured the country for appearances in appliance stores. If Westinghouse could make these incredible advanced robots, went the pitch, imagine how great their new refrigerators must be!) Telelux put on a show for the crowd.

After the banquet Miss M. P. Carr, a pretty model, appeared on the stage, and Mr. Shute [a Westinghouse vice-president] introduced the dummy to her as “Mr. Telelux.” The lady bowed and walked toward the dummy, who rose easily and politely to his feet.

“How do you do?” Mr. Telelux responded.

That one error of saying “sir” to a lady calls attention to one of the great virtues of the entire robot family. They cannot be vamped.

Telelux did a bit more than merely stand and sit. Another article reported that “the machine then moved about, answered questions [in a rich baritone according to yet another article] and executed commands flashed by a small electric light.”

Telelux was a huge step forward in humanizing robot appearance over the Telelux family. (Katrina might have worn a maid’s outfit and had three dimensions instead of two, but otherwise was her brother, and barely human.) 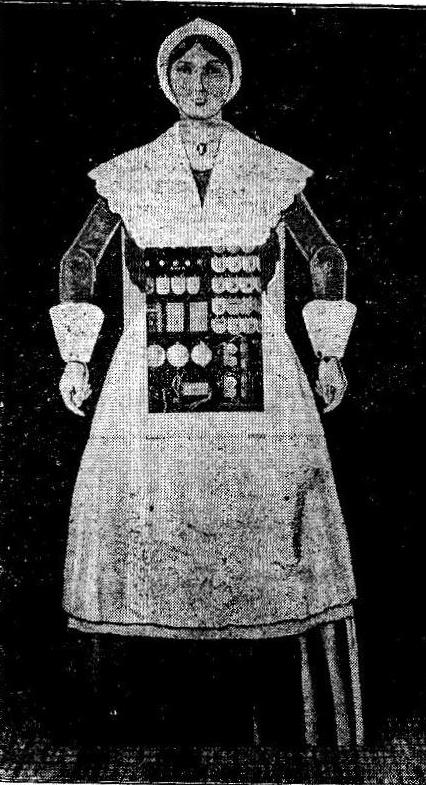 I said new robots were normally introduced at trade conferences and Telelux was hardly new. Westinghouse did have a new robot up its sleeve and did introduce it at the San Francisco convention just a few days later. This new Telelux version was made of molded rubber. In place of Telelux’s immobile dummy face, the new robot sported a far more human guise, with a face that had personality. In almost every way, this new robot was the most advanced, most human of any real-world world until that time.

Rubber is, of course, black. The new Telelux was therefore black, or, as they put it in the 1930s, a “mechanical Negro.” This “newest of mechanical men” got stuck with the name of “Rastus.” 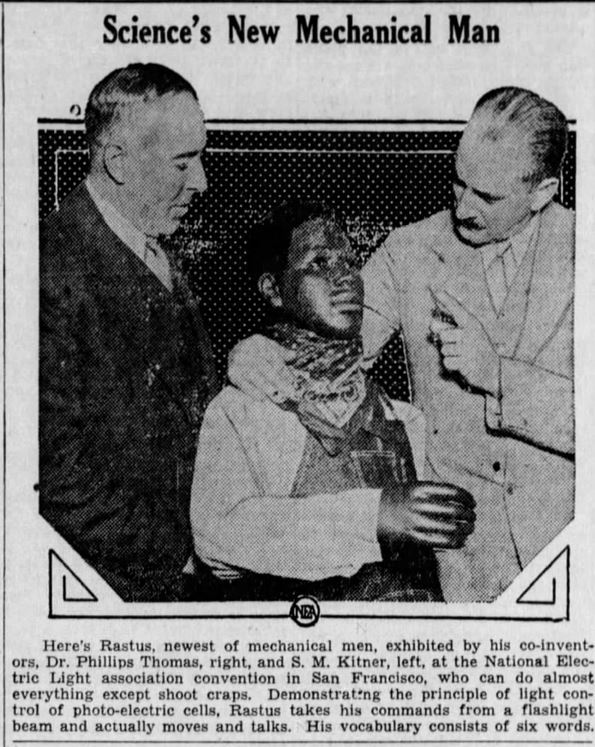 There’s no way to go back and reclaim the name “Rastus.” It’s irretrievably grafted onto a thousand insulting generic Negro jokes, many of which ran as fillers in the same newspapers that touted America’s advanced technology. Just as Katrina was always portrayed as a maid (usually as Katrina von Televox, since her outfit suggested that of the Dutch maid often used as an advertising symbol), Rastus was given a lower-class workingman’s outfit of overalls and a bandana. Although both conceptually represented the pinnacle of technological excellence, Westinghouse’s public relations humans were almost pathologically careful to dress their creations symbolically as humble servants, who would obey orders automatically and not threaten their human owners and operators in any way.

Not surprisingly, many writers have looked back at this seemingly glaring past prejudice and indulged in reams of semiotic judgement against Westinghouse’s servant robots, with especial contempt for and dudgeon against Rastus. None of them seem to have understood that Rastus had a white predecessor, though.

Nor did I until I started researching for this article. I never saw the June 17, 1930 article until today. Neither “Telelux” nor “Rastus” is associated with the image, so it wouldn’t appear in a keyword search. The second image is from a Sunday supplement article in the San Antonio Light for September 6, 1931 and was simply a mystery, unassociated with any robot I had a name for.

Putting Telelux’s name on the image changes everything. Rastus, as a more modern version of the existing Telelux, was not conceived as a “mechanical slave” in “the standard dress of the cotton plantation” as Bob Johnson wrote in Mineral Rites: An Archaeology of the Fossil Economy. It’s harder to credit him as “the dream of the robot, and of the ‘Negro,’ as a possible labour-saving device of the future,” as David Stubbs does in Mars by 1980: The Story of Electronic Music. It weakens the conclusion of Louis Chude-Sokei in his The Sound of Culture: Diaspora and Black Technopoetics that “The connection between Africans and robots was by the 1930s so normalized as to become a material sign of industrial control over multiple histories of labor.” Chude-Sokei’s conclusion that the rich baritone voice was due to the notion that black voices reproduced better on the early sound-recording devices also must be abandoned.

Westinghouse can certainly be credibly accused of naivety – no white, mainstream firm could see the world of race except through a blind eye – but if their intention was to soften and humanize the risible Televox, the condescending Katrina, the blank-faced Telelux, then using the form for function absolves them of the worst strain of racism in Rastus’ image.

Indeed, contemporary audiences were rapturous about the advent of Rastus. An article in the February 1931 Radio-Craft magazine – Hugo Gernsback technologically cheerleading, as always – lauded Rastus in superlatives.

During the electrical and radio exhibitions of the past season, the increasing perfection of those mechanical servants, now popularly called “robots,” has been the most spectacular feature. One of the finest yet produced, for human appearance and versatility, is “‘Rastus,” who is illustrated on the opposite page. He has the powers of speech, of using his hands, of rising and sitting—although, to date, the complicated maneuvers of walking seem to have been a little too much for biped automatons.

The signals, from which the talented gentleman from East Pittsburgh takes his cues, are given by means of light. The operator who directs his motions is armed with a control tube containing a neon lamp, which is modulated at audio frequency. Throwing the light from this on the proper photo-cell operates the desired relay in the robot. Within its figure is a miniature talking-movie equipment; that is to say, a 16-mm. projector, containing film with appropriate speeches in sequence on the sound track. This is operated at the proper time, and gives ‘Rastus a very copious vocabulary- in a rich, baritone voice. A green light operates this sound apparatus, and a red light the motor equipment. This talented performer made his debut before the A.I.E.E, under the chaperonage of L. W. Chubb, research director of the Westinghouse laboratories.

The last and most exciting of Rastus’ bag of tricks has in modern times been singled out as the most demeaning of Westinghouse’s slights. 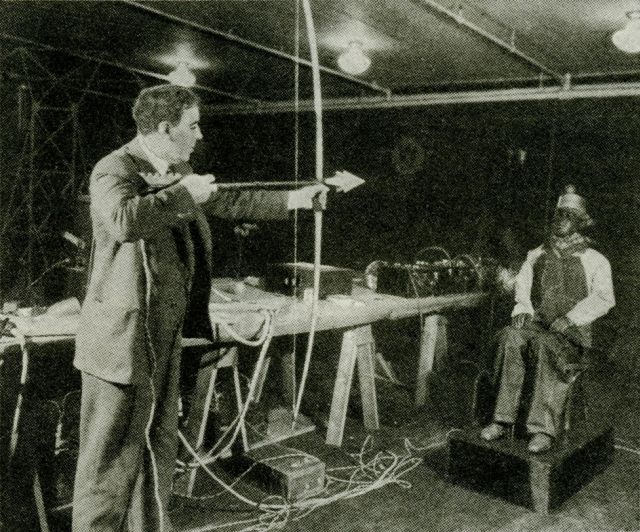 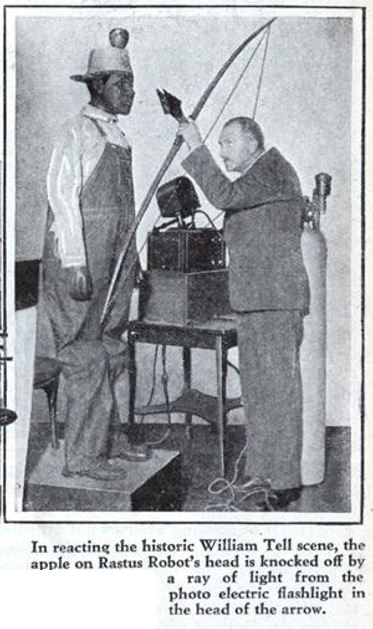 In fact, the apple was more than merely “knocked off”: it was blown to bits by a hidden charge, triggered by a beam of light from the bow. No arrow is ever launched. Much has been made by a line in an article in the April 18, 1931 Cincinnati Enquirer, that “The dummy sat down suddenly and utterly a human a started cry,” which fits into the image of the cowardly Negro so often deployed as comic relief in Hollywood movies of the era.

But the William Tell bit didn’t start with Rastus: it was already built into the white-faced Telelux. The same article that featured Mr. Robot with Miss Carr stated that, “A bow, shooting a single ray of light for a fraction of a second, struck an ‘electric eye’ which in turn ignited a charge of powder and blew the apple from his head.”

History cannot ignore the way the larger white society patronized, terrorized, and humiliated black Americans throughout that era, before, and after. But the particular contumely aimed at Rastus – and Westinghouse – needs to be re-examined in the light in this context.

Rastus did not last long in the public eye. Photo-electric devices soon became too common to startle. Westinghouse replaced Telelux and Rastas with the more robot-y Willie Vocalite in 1931. 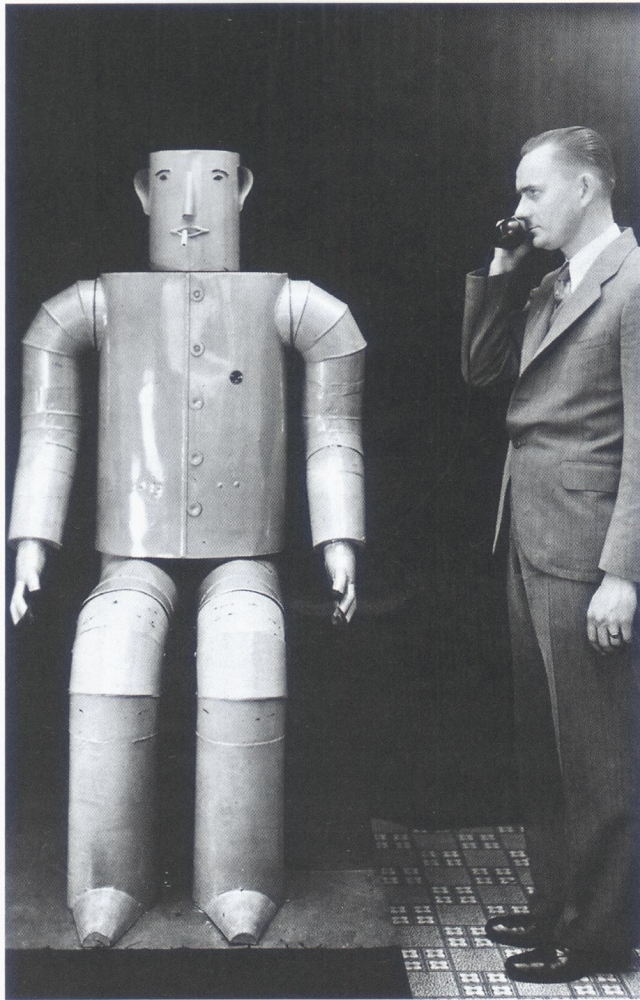 Visually, Willie was a ridiculous step backwards, but his ability to respond to spoken commands rather than sounds or light beams made him technologically more impressive. Willie also came without the baggage of human appearance. As a robot, he inspired a different set of expectations and was less susceptible to being slotted into older stereotypes. Tens of millions of Americans saw Willie at the Chicago Century of Progress Exhibition and San Francisco’s Golden Gate International Exposition as well as endless cross-country tours. Robots fell back into the category of “Harmless.” Well, “Mostly harmless.”

Steve Carper writes for The Digest Enthusiast; his story “Pity the Poor Dybbuk” appeared in Black Gate 2. His website is flyingcarsandfoodpills.com. His last article for us was The Iron Teacher. His epic history of robots, Robots in American Popular Culture, is scheduled for a Summer release.

This is a pretty startling bit of robot history you’ve uncovered, Steve. Well done. Future robot historians will thank you (and I thank you right now.)

I assume this came in too late to make it into your book?

[…] information on Telelux can be found here. As with Televox, the device represents technology in the service of showmanship more than anything […]