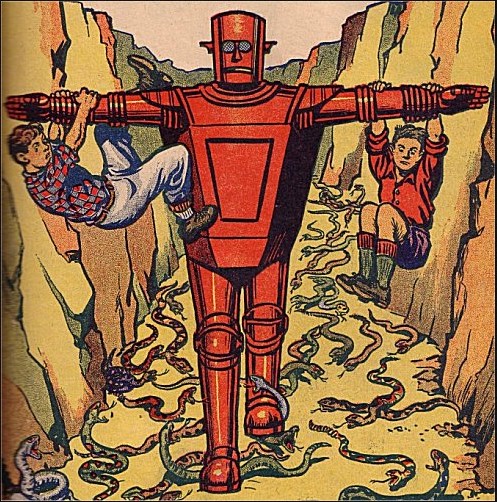 I try to stay away from expounding on the popular cultural artifacts from other countries. Going back in time and explaining why American pop culture looks the way it does often ranges from difficult to impossible. Even the English, a culture separated from ours by a common language, has a past that is a semiotic mystery most of the time.

Take comic books. Americans invented them (depending on what you consider Italy’s Il Giornalino to be) and the English followed closely behind. The Dandy started in December 1937 and The Beano on July 30, 1938, meaning it will reach its 4000th issue this summer. (It’s been issued weekly except during WWII.) Both were part of the gigantic D. C. Thomson & Co. empire. By then Thompson already had a lock on the boys’ story paper market, those being the British equivalent of the boy’s story weeklies that proliferated in the U.S. during the late 19th century. (Those are now famed for introducing early robots like the Steam Man and the Electric Man, along with many other science-fictional inventions.) The story weeklies usually carried a complete short novel or a serialization of a longer one. The story papers also carried serializations, but those were short segments that appeared alongside complete short stories.

Thompson started Adventure in 1921 and added The Rover, The Wizard, The Skipper, and, in 1933, The Hotspur. (The internet tells me that the name comes from the noble warrior Sir Henry Percy, known as Sir Harry Hotspur, who is immortalized by an appearance in Shakespeare’s Henry IV. Exactly the sort of everybody-gets-it reference that trips me up when encountering other cultures.) These “Big Five” dominated the market and lasted for generations, eventually mostly being merged into one another as the market for story papers faded at the end of the 20th century.

The Hotspur favored school stories, although it stretched the term to its limits. The schoolkids in the stories, boys of course, battled wild beasts, fought in wars, and went into space long before any astronauts did.

And they had a robot teacher. 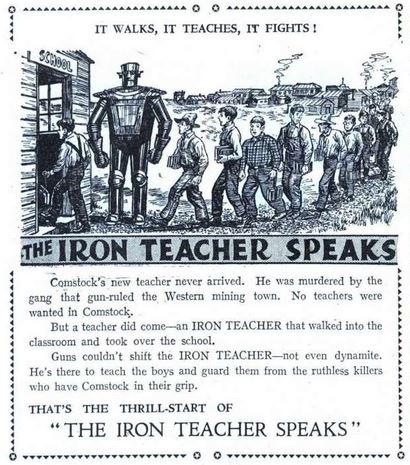 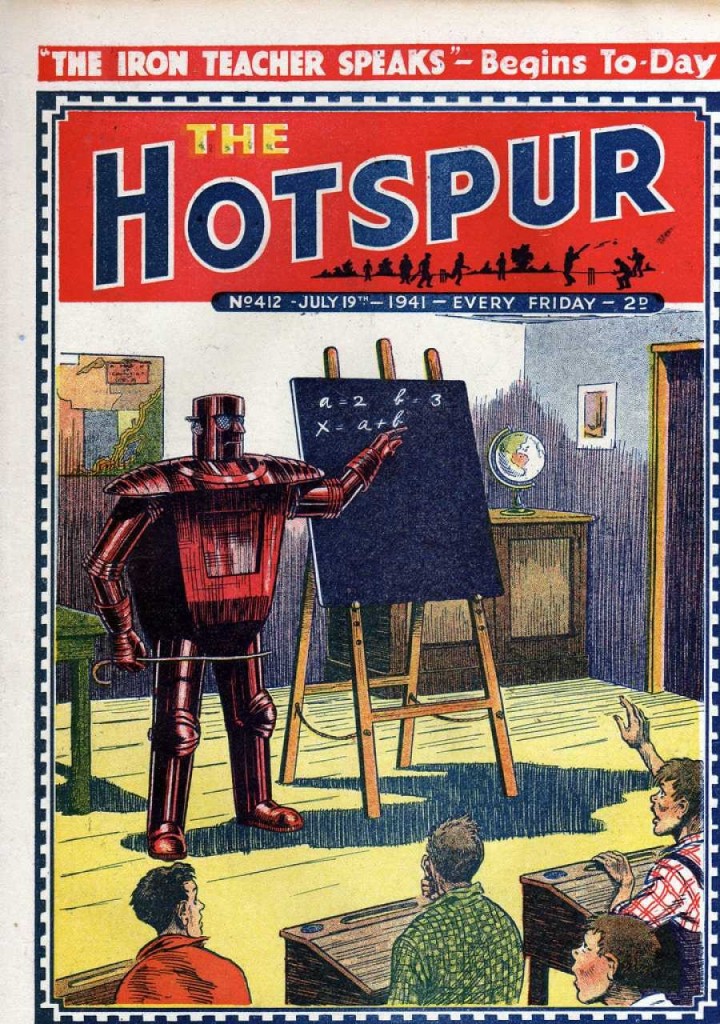 Comicvine offers the only explanation of its origin approaching coherence that I could find.

Apparently invented by a seeming simpleton hunchback named Sim, who just showed up with him one day and set about laying down some education on a group of what had before been thought unteachable boys in the American West.

Over 7 feet tall the Iron Teacher is fantastically strong and durable, along with being able to think and speak on his own, and having a high degree of knowledge in math, English, and the basic sciences the Iron Teacher has the ability to emit twin beams of purple light out of his eyes bright enough to dazzle anyone looking directly at them.

The Iron Teacher first appeared in the 1940s with an abiding program to both teach and protect young people, which was a good thing as during his wanderings he encountered not only a large number of lads badly in need of a good education, but a string of villains, and cads that needed a good thumping, to say nothing of the dinosaurs, saber-tooth tigers and aliens that also came the way of he and his students.

The text stories had both splash image intros and internal illustrations, usually with as much damage to surroundings as possible.

The wing-stub projections at the IT’s shoulders are a nice touch. They sure look sharp when the IT walks implacably through a wall toward a badguy. (Leaving his outline intact, like a Looney Tunes character.) 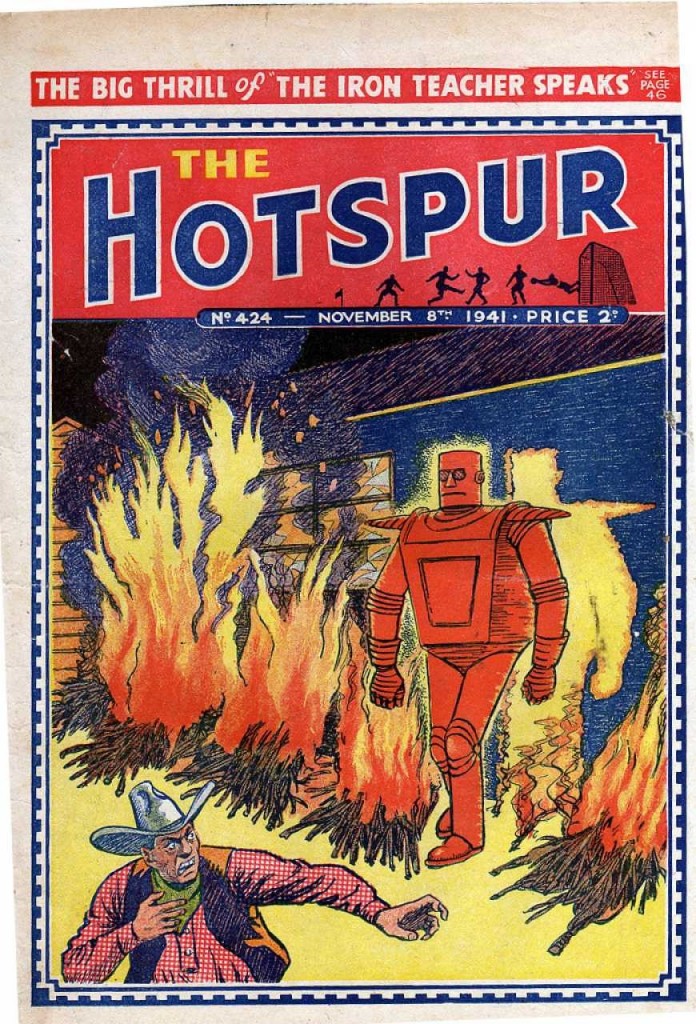 The IT came and went in long story arcs. The format changes in the early 1950s to a kind of comic book, with captions in place of text balloons.

The original Hotspur lasted 1197 issues, the last on 17 October 1959. Kids didn’t have much of a wait for more thrills. The New Hotspur started the very next week and ran a mere 1100 issues. To make life as confusing as possible for researchers, the “New” was dropped after issue #174, so for the rest of its run The Hotspur had issue numbers that duplicated those of three decades earlier.

Fortunately, the IT was given a complete makeover when it finally reappeared in The Hotspur #677, October 7, 1972. 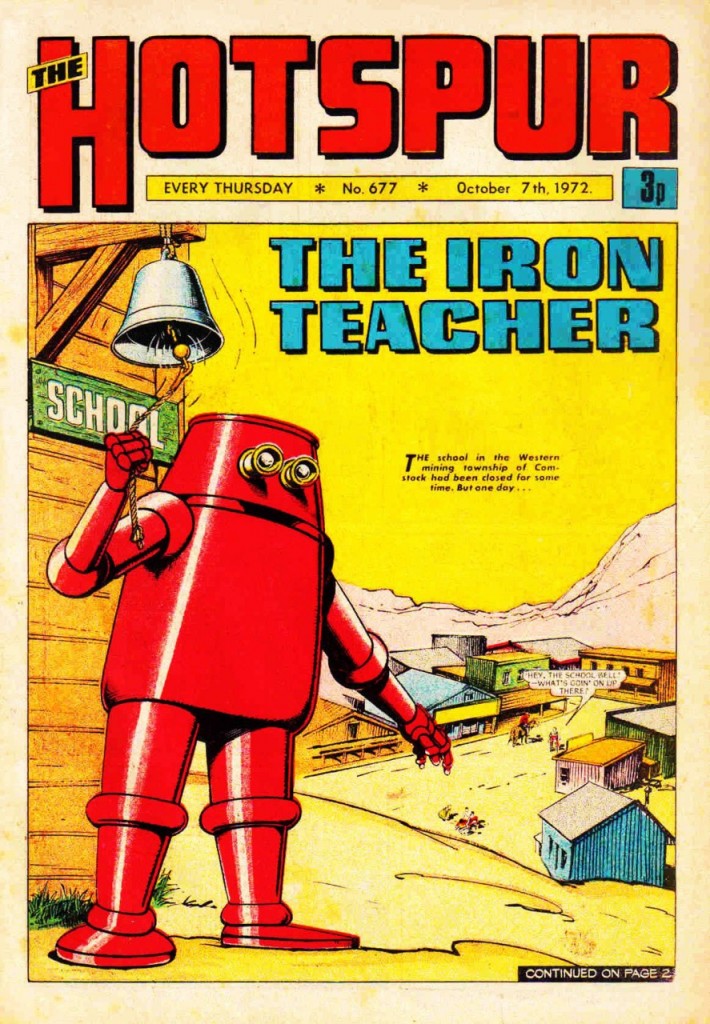 Somehow, the neckless sleekness of the new design makes the IT seem more primitive than the gawky old-style robot. If the IT were a robot. This new version seems to present the IT as a remote-controlled machine rather than an independent thinker.

Even so, the IT was a schoolmarm to core, with advantages. 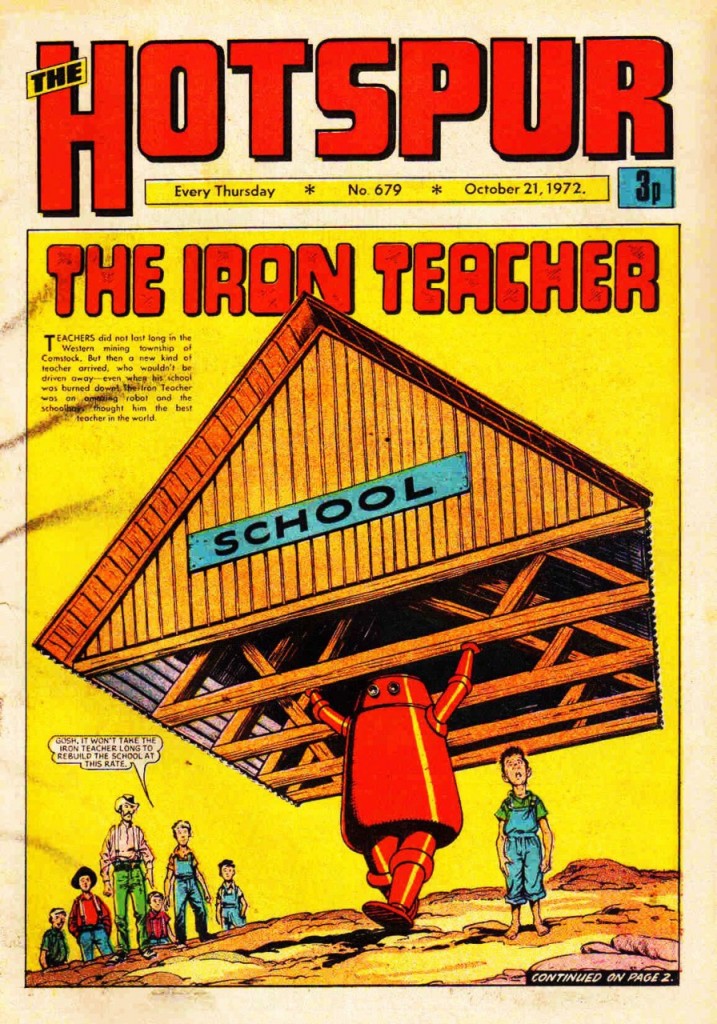 And the artists subtly acknowledged the older version in a clever reference on the cover of The Hotspur #681, Nov. 4, 1972. 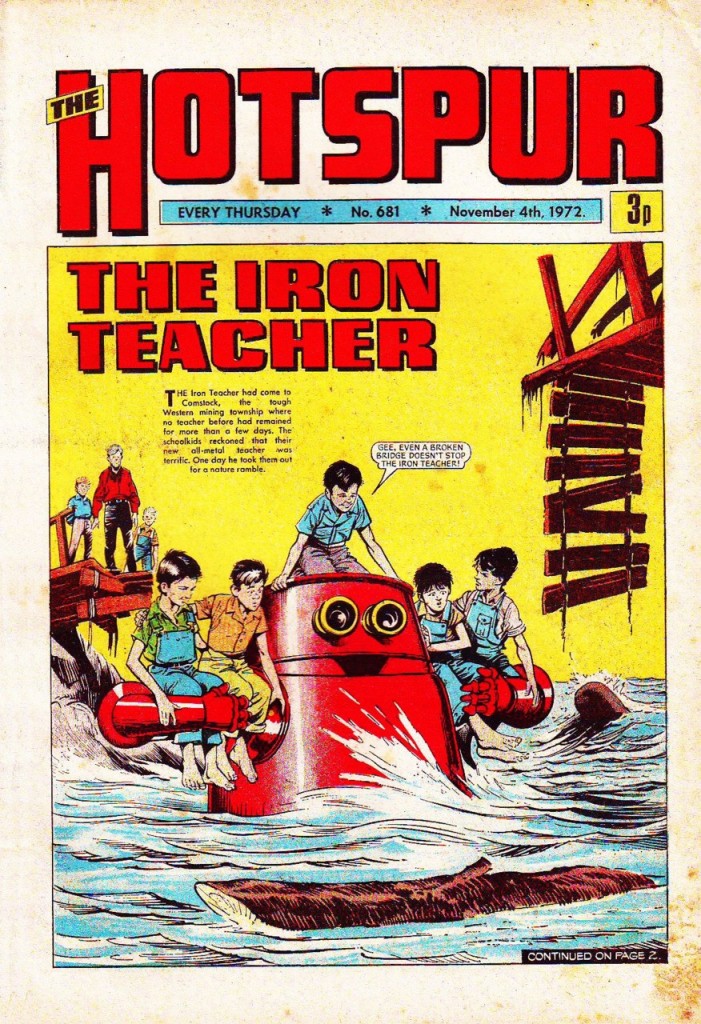 The adventures lasted into 1973. And that seems to be the last iteration of The Iron Teacher. Although I’ll bet the old-school robot lurks in a background of some Alan Moore comic. If not, then somebody needs to prod Moore and make it happen.

Steve Carper writes for The Digest Enthusiast; his story “Pity the Poor Dybbuk” appeared in Black Gate 2. His website is flyingcarsandfoodpills.com. His last article for us was The Robonic Stooges. His epic history of robots, Robots in American Popular Culture, is scheduled for a Summer release.