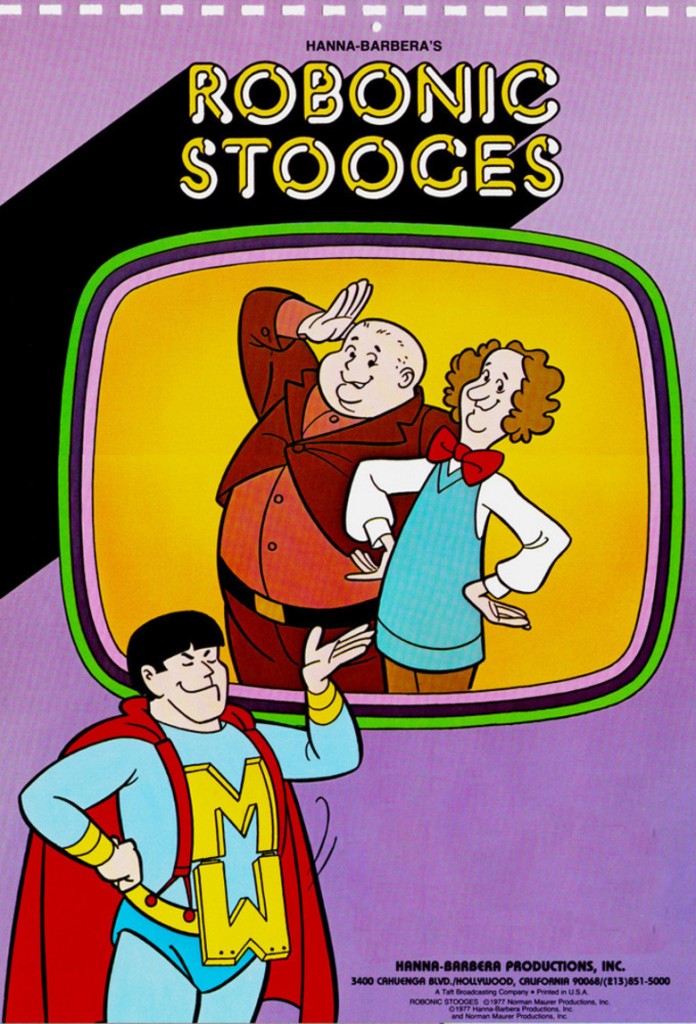 Marshall McLuhan may have proclaimed the the medium is the message but robots transcended any one medium by the 1970s. Audiences found robots everywhere: in movies, on television, in comic books and strips, in cartoons, in toys, in print science fiction and increasingly in mainstream thrillers.

Martin Caidin created a sensation with his 1972 bestseller, Cyborg. Stalwart astronaut/test pilot Steve Austin emerges from a plane wreck with half his body damaged. Incredibly expensive – six million dollars worth! – mechanical parts with capabilities beyond those of flesh are grafted to replace his missing arm, eye, and legs, making him a bionic superman. (The term bionic was, in the poetic words of Philippe Goujon, “invented by Major Jack E. Steele of the aerospace medical division of the U. S. Air Force on an August evening in 1958” as a portmanteau of biology and electronics.) Less than a year after the book’s release, a made-for-television movie hit the airwaves. Two more movies begat The Six Million Dollar Man tv series which begat The Bionic Woman. Such are empires launched.

Robots almost always had been comic sidekicks or deadly menaces in popular media, rarely lead characters. The Six Million Dollar Man was the first to successfully plug that enormous hole on television, dodging the identification problem by making a human mechanical. (My Living Doll from 1964 starred an actual robot but got canceled partway though its first season.) With a formula for success in hand, other television creators took a crack at the magical potential audience draw of bionics. Such a cracked mind belonged to Norman Maurer, who lead audiences down a psychedelic rabbit hole toward the most mind-blowing mash-up of genres in popular culture’s dubious history.

In 1947, 21-year-old Norman Maurer married Joan Howard and went into the family business. Since Joan Howard was the daughter of Moe Howard, the family business was Stooging. He did anything and everything to keep their names in front of public, from writing or producing or directing Three Stooges books, comic books, shorts, and movies to acting as their manager and agent. 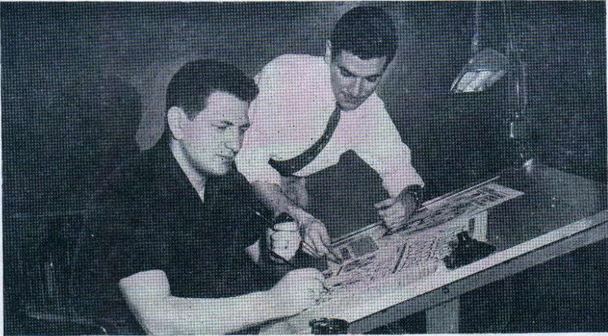 The comic books that Maurer, right with artist Joe Kubert, wrote, drew, and edited from the 1949 on, brought the Stooges down to kid level. His take on them as Morons, politically incorrect as it might be today, would come back to haunt us two decades later. 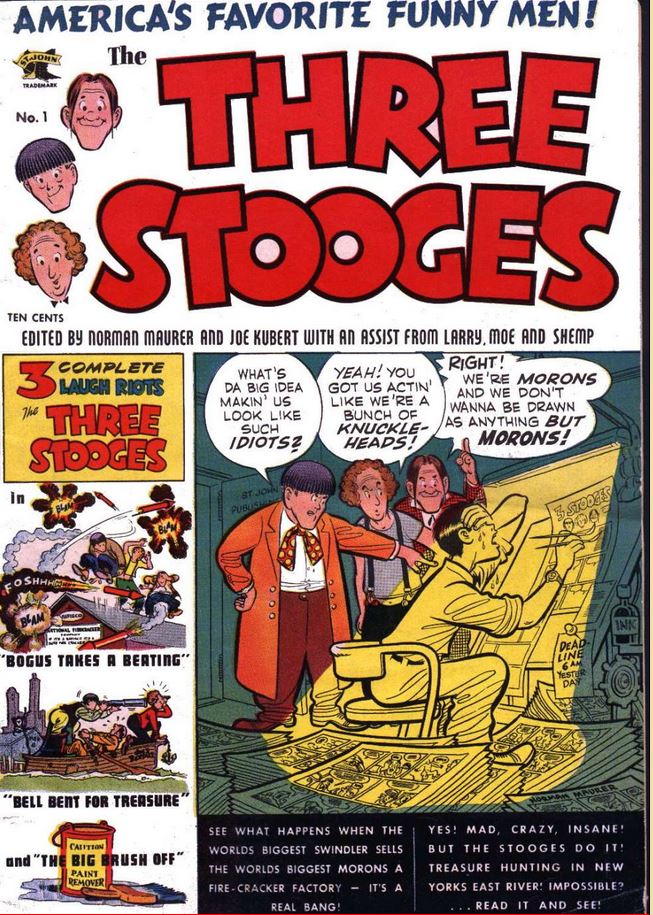 Maurer produced the live-action and animated The New Three Stooges, which ran from 1965 to 1966. A decade later, Hanna-Barbara decided to rip off its own Banana Splits Adventure Hour with The Skatebirds. These grooviest of groovy cats, I mean birds, were actors dressed as furries (molties?) cashing in on the then nascent roller-skating craze. (There was a groovy cat involved, a villain named Scat Cat, voiced by Scatman Crothers.) 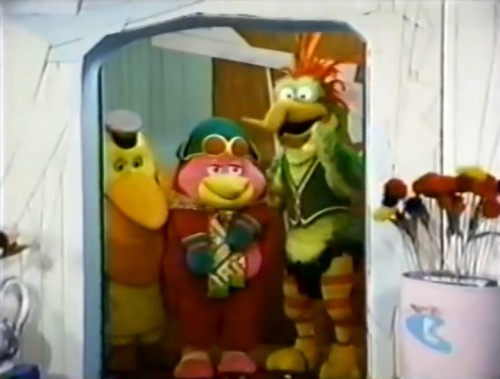 The Skatebirds zanily cavorted in live action time-fillers between three animated segments and the live-action Mystery Island. (That featured the Lost in Space robot renamed POPS. Please don’t make me go there.) One of the animated segments was all Norman Maurer. Speculating what he was on when he created the spot would undoubtedly constitute libel. Suffice it to say, he rebooted the Stooges, the original Moe, Larry, and Curly, as bionic superhero robots, the Robonic Stooges. Why Robonic instead of Robotic? Robonic has the nifty -nic ending of bionic and also echoes the Stoogean epithet of moronic.

Hanna-Barbara has a reputation for poor quality animation, made necessary by the rate at which they cranked out cartoons, but their voice talent usually was first rate. Old pros all, ventriloquist Paul Winchell voiced Moe, British actor Joe Baker voiced Larry, and Frank Welker voiced Curly, a natural candidate as he used the same voice for Jabberjaw. (Jabberjaw was a great white shark who played drums for the Neptunes, humans Biff, Shelly, Bubbles and Clamhead. This was Hanna-Barbara ripping off their own Josie and the Pussycats. Please don’t make me go there either.)

The first episode, Invasion of the Incredible Giant Chicken, set the tone. “Built from the world’s finest electronic parts. Designed as the world’s most perfect electronic robots. The Robonic Stooges!” intones the narrator. 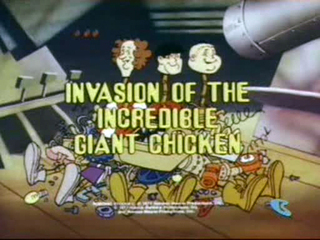 Professor Kluck is just as perfect on the villainous side. With the completion of his super-growth formula he will soon be President of the World! At dawn he tests the formula on a rooster and hen, who swiftly outgrow the barn they’re in. The Stooges are trying to fix the plumping in the dilapidated house they share. Seconds later a giant chicken foot smashes through the ceiling. In the ensuing flood a tiny boat sails in bearing a film projector. Goofing on Mission Impossible’s tape recorder, the film shows their boss, Agent 000 (voiced by Ross Martin) who informs them that Professor Kluck is going to terrorize the world with one million pound rhinos. “Capture the chickens … and Kluck.” he says. Guess what Curly says? If you don’t guess “cluck, cluck, cluck” turn in your secret decoder ring.

The chickens are swallowing giant industrial pipes, probably because they think they are worms (a joke over most kids’ heads) when the Stooges try to lure it with corncobs. Unfortunately, their vehicle is Curly on wheels and he heads them right into a pipe. The hen naturally swallows it right down and lays an egg. A three-yukker, I mean three-yolker, Moe, Larry, and Curly.

If eggs are the lure, the Stooges have the granddaddy of them all: the roof of the Astrodome, spread with glue so the chicken can’t fly away. Extruding a turntable, a needle, and a speaker the Stooges broadcast a chicken call across the city. (The insides of the robonic Stooges are like Batman’s magical utility belt squared. Not only do they contain any preposterous gadget that the plot requires, but they have the function of any device.) It works. The hen sets, ready to brood — right on top the stuck Stooges. A good plan, except that the chicken is now big enough to take the whole roof with her. For a moment, until it rips away taking her undercoat of feathers with it. She blushes.

In the next scene the hen is inhaling all the vegetables in a supermarket. (Why? Chickens eat corn, not broccoli. Is this a stealth PSA? “Kids! Eat your vegetables! See, even giant chickens do!”) The Stooges put Curly into a rooster suit and pump him up to giant-size, a gag the writers loved so much they stuck it into episode after episode. Romeo Curly bewitches the hen with the intention of luring her out of town. Then the real rooster shows up. And he’s pissed. The same fate befalls Curly here as it would every other time they use the gag. The rooster pecks a hole in his suit and he shoots off like a torn balloon.

In a twist that surely no one saw coming, Moe unleashes his genius by whipping up a batch of reducing spray, using Curly’s magical insides as a blender. His recipe involves corn starch, hot peppers, Tabasco, reducing cream, diet pills, and puffy biscuits, no doubt an old family favorite. The formula works as expected: it makes Curly grow. But Larry uses his reversing mirror to mix up an anti-batch that is a shrinker. They shrink the poultry and then spray Kluck and his helicopter, catching on a piece of flypaper. The good guys win.

The Skatebirds went over about as well as Jabberjaw. Sixteen episodes ran from September through December 1977. Below are screen grabs from “Rub-a-Dub-Dub, Three Nuts in a Sub,” On Your Knees, Hercules,” “The Eenie-Meanie-Genie,” and “There is No Joy in an Evil Toy.”

The Three Stooges were unkillable, though. Hanna-Barbera sliced them and another segment, Woofer & Wimper, Dog Detectives (a rip-off of Hanna-Barbera’s Scooby-Doo), into a half-hour show, The Robonic Stooges, which ran from January through March 1978, adding 16 more episodes (two per week) to the oeuvre. (Episodes ran just under six minutes each.) Googling will pull up most of the episodes from various sites with some further searching. It’s nowhere obvious, for instance, that if you go to Saturday Morning Archives and play the first episode in full screen that a list of other archived episodes will appear. All 32 episodes were finally collected on a four-disk box set for completists and connoisseurs of the absurd.

Steve Carper writes for The Digest Enthusiast; his story “Pity the Poor Dybbuk” appeared in Black Gate 2. His website is flyingcarsandfoodpills.com. His last article for us was Telling a Clock What You Want to Eat. His epic history of robots, Robots in American Popular Culture, is scheduled for a Summer release.

“We can rebuild them – louder, stupider, more violent.”