Steven Silver has been doing a series covering the award winners from his age 12 year, and Steven has credited me for (indirectly) suggesting this, when I quoted Peter Graham’s statement “The Golden Age of Science Fiction” is 12, in the “comment section” to the entry on 1973 in Jo Walton’s wonderful book An Informal History of the Hugos. You see, I was 12 in 1972, so the awards for 1973 were the awards for my personal Golden Age. And Steven suggested that much as he is covering awards for 1980, I might cover awards for 1973 here at Black Gate.

As I began reading the SF magazines, and buying SF paperbacks, there was really no doubt who the most popular artist was: Kelly Freas. (This is not to deny the excellence of the likes of John Schoenherr, Jack Gaughan, and many more.) Kelly Freas was one of the most regular artists at Analog, and he did covers for many book publishers, at that time perhaps most often DAW. (Later he was the cover artist for every one of the Laser Books line.) His art was very colorful, very recognizable. His work was often humorous, but also could be dark and gritty. He was also an excellent interior illustrator.

Freas was born Frank Kelly in 1922. He took his stepfather’s last name after he was adopted. (His artwork was signed both Kelly Freas and Frank Kelly Freas.) He served in the second World War right out of High School, doing reconnaissance camera work and painting bomber noses. He spent some time in advertising. His first painting in the SF field was the cover for the November 1950 issue of Weird Tales (above left). One of his most famous paintings in the field was the 1953 cover of Astounding, illustrating Tom Godwin’s “The Gulf Between” (above middle). He later repainted it (with slight changes) for use as the cover of Queen’s album News of the World. Outside of SF he may have been best known for his work at Mad Magazine – he was the originator of the Alfred E. Neumann character.

Freas won his first Hugo Award in 1955, and won the next three Artist Hugos. After being shut out in the 1960s, he won 6 of the 7 Hugos awarded between 1970 and 1976. He also won several Locus Awards, the Phoenix Award, several Analog Awards, and two Chesleys.

Here’s a sampling of his work from 1972. The cover of the December Analog is an interesting case – it illustrates George R. R. Martin’s third published story, and his first for Analog – and I recall Ben Bova noting that normally he’d not give the cover to such an undistinguished story, but the potential artwork was too tempting to pass up! Note the work for Ace for Samuel R Delany’s The Fall of the Towers, and a very early DAW cover, for Brian M. Stableford’s To Challenge Chaos.

Kelly Freas was active as an artist nearly until his death in 2005. Here’s his last Analog cover, for the February 2003 issue. 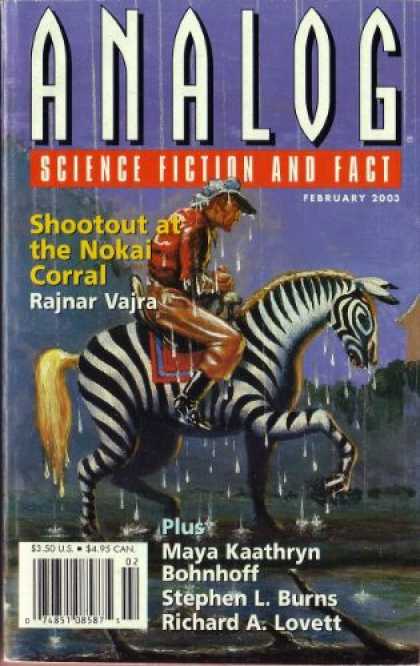 Rich Horton’s last article for us was a look at the 1973 John W. Campbell Award for Best New Writer. His website is Strange at Ecbatan. See all of Rich’s articles here.

Absolutely my favorite SF artist and illustrator (or are those the same thing? Probably). Though there are a couple of slender books on him, I wish someone would do a major volume featuring the bulk of his painting and interior work.

To me, Freas IS the Golden Age of SF. There may(?) be better artists out there, but Freas’ art just has that LOOK.