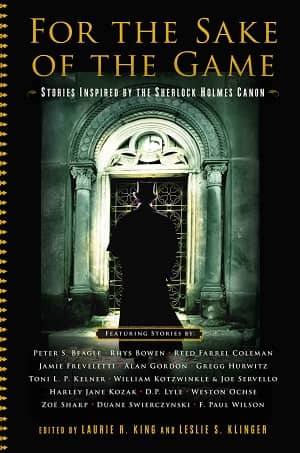 Laurie R. King and Leslie S. Klinger have edited four popular Holmes-themed anthologies: A Study in Sherlock (2011), In the Company of Sherlock Holmes (2014), and Echoes of Sherlock Holmes (2016). Their newest features contributions from a stellar list of authors, including Peter S. Beagle, F. Paul Wilson, William Kotzwinkle and Joe Servello, Duane Swierczynski, and Gregg Hurwitz. Publishers Weekly says it presents a wide range of genres “from cozy to horror;” here’s a snippet from their full review.

The 14 selections include a poem, Peter S. Beagle’s “Dr. Watson’s Song,” which provides a deeper look at the doctor’s emotional life, and a comic, William Kotzwinkle and Joe Servello’s “The Case of the Naked Butterfly,” which continues the exploits of insects Inspector Mantis and Dr. Hopper. Fans of the BBC’s Sherlock will appreciate Alan Gordon’s take on Holmes’s relationship with Mycroft in “The Case of the Missing Case.” Reed Farrel Coleman weighs in with one of the more memorable contributions, the metaphysical “A Study in Absence,” in which a book editor asks for help tracing an author using the pseudonym of I.M. Knott. The best light entry is Harley Jane Kozak’s “The Walk-in,” featuring a Sherlockian British intelligence agent, which opens with the tantalizing line “It’s not every day that you walk into your apartment and find that your cat has turned into a dog.”

For the Sake of the Game is the latest volume in the award-winning series from New York Times bestselling editors Laurie R. King and Leslie S. Klinger, with stories of Sherlock Holmes, Dr. Watson, and friends in a variety of eras and forms. King and Klinger have a simple formula: ask some of the world’s greatest writers ― regardless of genre ― to be inspired by the stories of Arthur Conan Doyle.

The results are surprising and joyous. Some tales are pastiches, featuring the recognizable figures of Holmes and Watson; others step away in time or place to describe characters and stories influenced by the Holmes world. Some of the authors spin whimsical tales of fancy; others tell hard-core thrillers or puzzling mysteries. One beloved author writes a song; two others craft a melancholy graphic tale of insectoid analysis.

This is not a volume for readers who crave a steady diet of stories about Holmes and Watson on Baker Street. Rather, it is for the generations of readers who were themselves inspired by the classic tales, and who are prepared to let their imaginations roam freely.

Leslie S. Klinger’s previous books include In the Shadow of Edgar Allan Poe and The Annotated Watchmen; Elizabeth Crowens interviewed him for Black Gate last year. For the Sake of the Game was published by Pegasus Books on December 4, 2018. It is 264 pages, priced at $25.95 in hardcover and $12.99 in digital formats. The cover was designed by Christine Van Bree.