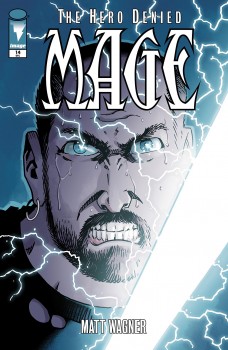 So we’re down to the penultimate issue of the entire Mage trilogy. Obviously, I’m not expecting any big reveals until the very last issue, so this one is just going to let things simmer just a little bit further until the boil.

We begin with the reveal that Magda and Hugo did NOT kill a Gracklethorn last issue, instead just knocking her out. When two of her sisters find her, they set her free, then start squabbling about what to do about their prisoners escaping. Their argument is interrupted when Karol walks in holding the Fisher King.

The scene shifts to Hugo and Magda walking through a cavern. Magda mentions that the doorway they entered through disappeared, so they can’t go back the way they came. She then reasons that “it had an entrance, which means that it has to have an exit as well.” And while that’s not technically true, she’s likely just saying that to calm her son. Up next, Hugo sees a troll with his magic glasses and knocks it off a cliff with a magic light bulb before it can sneak up on his mother. Before they can go any further, Magda’s wedding ring lights up, which apparently signifies that it’s detected Kevin nearby.

We cut to a scene of Kevin holding Excalibur, which suggests that the Magda’s ring didn’t detect him so much as detect the ignition of his magic. After killing what looks like the entire Dungeons & Dragons Monster Manual, Kevin is asked by Mirth if he’s all right. It’s at this point that Kevin mentions (for I believe the first time in this series) that his hands sometimes hurt after he uses his power. Mirth explains that, while Kevin’s power continues to grow, it will become more than he can handle. As Kevin, Mirth, and Miranda continue through the caves, we see the little imp hiding behind a rock, observing them.

Cut back to the Fisher King, who explains that he’s finally come out of hiding so that he can bear witness to the “moment of confluence.” He does a whole nine-panel spread of shape-shifting to show that he can assume a variety of forms and a variety of names and that none of them really matter. Olga is about to kill him, when Karol reminds her that the Umbra Sprite needs him alive for the ritual. This is the ritual that the Umbra Sprite has been planning since the very beginning of Hero Discovered. Of course, at this point, the Gracklethorns have no idea where their mother is or how to reach her.

Back to Magda and Hugo, who are following a beam of light running from Magda’s ring to wherever Kevin is located. As they make their way, they’re attacked by thousands of little bug monsters. Magda’s flying cat is consumed by the swarm and the fate of mother and son is left up in the air.

Meanwhile, Kevin comes face-to-face with Abhartch, this giant cobweb witch thing with a rib cage full hairy mouthball monsters. Sorry, no better way to describe them. They don’t seem like such a great threat, but obviously all of the fighting from the last couple of issues have taken their toll and Kevin finally falls.

At this point, Miranda, using her magic cloak to assume the form of an adorable little dragon, comes between the skeleton web witch thing and her father. But of course she only looks like a dragon, so she’s easily swatted aside. But seeing his daughter injured fills Kevin with a fresh rage and the last guardian monster is cut in half with Excalibur.

We then reach the last page, with Kevin holding his daughter’s still and bloody body. TO BE CONCLUDED!

Starting with that final scene, it’s certainly no coincidence that it mirrors the end of issue 13 of Hero Discovered. In that issue, it was Edsel who was struck down. And it was followed by an issue that was almost entirely Mirth explaining Kevin’s role in the grand scheme of things, as well as a general philosophy of life. Since a half dozen plot threads will need to get tied up in issue 15, I doubt there will be another long lecture on philosophy, but it does bring up one of the interesting limitations of doing this sort of series over a three-decade period.

While Mirth was written as an ancient man in a young body, a being possessing the wisdom of the ages, the story was written by a man in his early twenties. Matt Wagner has gone through a lifetime of experience. Some of his plans for his life have worked out just like he wanted, but I’m guessing that most of his plans either failed or turned out very different than expected. He’s fallen in love, gotten married, and had children; even if you plan to get married and have children when you’re a young man, you have no idea who you’re going to marry until you meet them and you have no idea how your children will change your life because you have no idea what sort of people those children will become. When Matt Wagner wrote issue 1 of Hero Discovered way back in the 1980s, he had no idea what he would eventually learn about life and morality. Perhaps he’s looking back at what he wrote in his twenties and wondering how he could have ever believed any of that stuff. Personally, my moral center has changed quite a bit over the last thirty years.

So while Matt Wagner may well have had this entire three-series arc plotted out when he was in his twenties, he couldn’t have really known how it would all end until he’d spent decades just living life day by day. And that’s why he couldn’t have simply written parts two and three immediately after part one was finished. There were deeper questions to answer than just who beats whom in a fight. With that said, I’ve noticed that, with each series, there’s less time spent talking about morality and more time taking action. And while a Kevin who rushes forward into what is obviously a trap might not seem like the most intelligent character, he’s far more mature than the man we first met, who just sat around complaining.

As for the rest, I’m even more convinced that the imp is really Mirth and that the “Mirth” who’s been following Kevin these last two issues is really the Umbra Sprite in disguise. She still hasn’t reappeared in her inner sanctum and Mirth is quick to comment on how Kevin’s power is overwhelming him. Mirth also reminds Kevin that he might not have enough magic to help if Kevin fails. What might be caution could also be the Umbra Sprite’s attempt to fill Kevin with despair. And now that Miranda has died (at least, that’s a very likely interpretation), we might see “Mirth” tip his hand and really heap on the despair. Kevin has lost a daughter to this conflict, just as the Umbra Sprite did several issues earlier, both daughters essentially sacrificed to their respective causes.

While Magda and Hugo will obviously survive the bug monster swarm, there’s still the issue of Hugo eating the fairy food and therefore being unable to leave the caverns. While I wasn’t sure about the Fisher King reveal last issue, it seems like he’s the real deal. It also seems as if he’s ready to die, which implies that there might be a new Fisher King by story’s end. Miranda’s magic cloak would allow anyone to assume the role of the shapeshifting traveler.

That just leaves the Gracklethorns. More specifically, it leaves Karol and her three idiot sisters. Without the Umbra Sprite to guide them, the Gracklethorns are so easily distracted that they seem to completely forget that Magda and Hugo have escaped. They also seem completely unaware that Kevin has been murdering all of the guardians in their lair for the last two issues, although it’s been pointed out that he hasn’t been subtle about his movements. Throughout the series, Matt Wagner has been making clear that the Gracklethorns are never going to be a significant threat to Kevin. Looking back, Grackleflints in series one and Emil’s children in series two were never much of a threat either.

So what is the big threat that Kevin needs to defeat in the final issue? I can’t imagine that it ends with a long fight against the Gracklethorns. Hitting the Umbra Sprite with a magic baseball bat would be anticlimactic. At this point, I imagine the series will end with a family reunion, a brief time of mourning, then the revelation of both Mirth and the Umbra Sprite. After that, sad to say, evil will likely only be held at bay with a sacrifice. Whose sacrifice? No idea. I’ll certainly be at the comic shop on Wednesday, February 27, 2019, to pick up the very last issue of Mage.