George R.R. Martin is the most popular fantasy writer in the English language, and indeed one of the most popular fantasy writers of all time. I know a great many aspiring young twenty-something writers who aspire to be him, or at the very least aspire to his career. Most have read his magnum opus, the Game of Thrones novels, but few seem to be aware that not so very long ago GRRM was also a struggling twenty-something writer. If you’re serious about studying his career, the place to start is his early short story collections, which gather the best work of a gifted young writer who even then was obviously destined for great things.

George’s second collection Songs of Stars and Shadows was published in paperback by Pocket Books in 1977. It contains nine tales, including four in his Thousand Worlds milieu, his Hugo-nominated “And Seven Times Never Kill Man,” his space dogfight story “Night of the Vampyres,” and “This Tower of Ashes,” which he calls in his Introduction “in my estimation the best short story I have ever written.”

George’s lengthy intro, in fact, is one of the best things about the book, especially for modern fans. It’s a delightful peek behind the scenes at the life of a young science fiction writer in the early 70s, enduring writing slumps, half-heartedly accepting thick research packets on lasers from new Analog editor Ben Bova, sleeping on the floor at science fiction conventions (with his boots as a pillow), and sneaking into the Playboy Club with Howard Waldrop. Here’s a colorful snippet that talks about how his first collaboration with Waldrop, “Men of Greywater Station,” came to be. 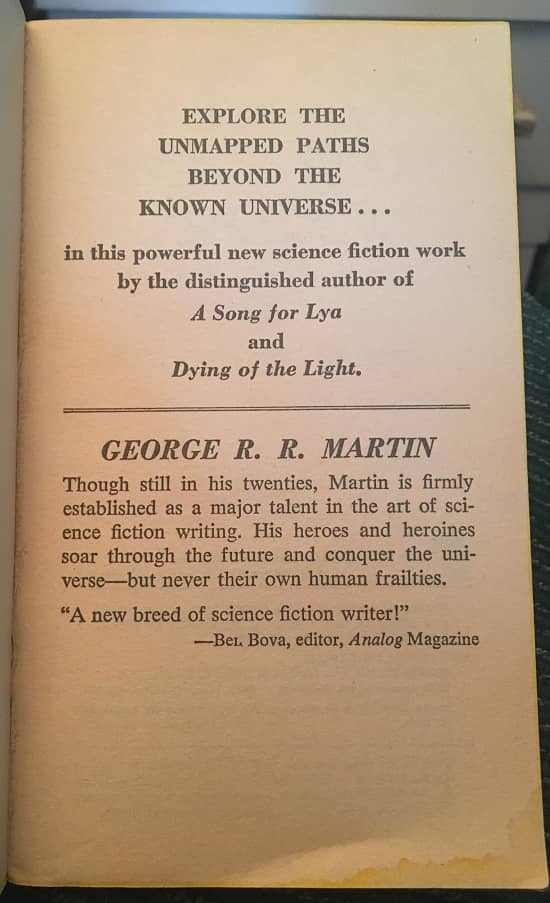 “Men of Greywater Station” was the first collaboration I ever tried. Texas writer Howard Waldrop and I had been corresponding since 1963, when we were both in high school and I mailed him a quarter to buy a Justice League of America comic book, but we never actually met in the flesh until 1972, when we finally got together at an SF convention in Kansas City, Missouri. There was a Playboy Club on top of the convention hotel. Most of the folks Howard and I were hanging around with had never been in a Playboy Club, so one night a big party went up to swill expensive drinks and ogle the Bunnies. In the middle of all that decadence Howard and I sat nursing our beers, and suddenly a furtive look came into our eyes, and we got feverish and began to talk story, and from there it wasn’t terribly long until we snuck down to the hotel room where we were sleeping on the floor (I was using my boots as a pillow) and Howard got out his portable typewriter. One of us wrote while the other partied, and by the time the weekend was over we had half the story. Howard took the manuscript down to Texas with him, finished the rough draft, and shipped it up to me. I revised, expanded, polished and finally marketed the thing, by then the longest story either of us had ever done.

Not so very long ago I sold a signed hardcover of A Games of Thrones for $2,250. Songs of Stars and Shadows, like most of George’s early collections, is priced much more reasonably. I found the copy above in a box of 50 science fiction paperbacks I bought online five months ago for $23, priced at less than 50 cents each.

While I would be loath to disagree with a distinguished author (yeah, sure!), and admitting things have changed since 1977, I would put “Portrait of His Children” atop Mr. Martin’s shorter works.

And I also loved Tuf Voyaging both for its biological speculations and for the anti-hero nature of its protagonist. Maybe not Mr. Martin’s best, but still very readable and enjoyable.

I did not even know that this one existed.

At some point I need to go back and read more of Martin’s pre-GoT stuff — to this day I still remember being freaked out by “Sandkings”.

> And I also loved Tuf Voyaging both for its biological speculations and for the anti-hero nature of its protagonist.
> Maybe not Mr. Martin’s best, but still very readable and enjoyable.

Good pick. I had that one recommended to me in the mid-80s by a girlfriend, and it took me a while to find a copy. Still haven’t read it yet, but it’s next on the list.

Do you know if the Tuf stories are part of Martin’s THOUSAND WORLDS settings?

> At some point I need to go back and read more of Martin’s pre-GoT stuff — to this day I still remember being freaked out by “Sandkings”.

“Sandkings” remains one of my favorite SF/horror stories (surpassed only by “The Screwfly Solution,” I think.)

I reread it a few years ago and was surprised to discover the main character is a pretty despicable guy. He definitely deserves what happens to him in the end!

Decades ago, I had George’s first two paperback collections, A SONG FOR LYA and SONGS OF STARS AND SHADOWS. In both cases, I had the Coronet editions, one of which is illustrated above.

In 2006, a friend gave me DREAMSONGS, and I gave away my two old paperbacks, thinking “Oh, it’ll all be in DREAMSONGS, anyway”. I was wrong, of course. Not everything was in DREAMSONGS, which I’ve read all the way through (it took years).

For decades, I remembered (mistakenly) that this story was “A Song for Lya”, but while slowly working through DREAMSONGS I eventually re-read ASFL and found that it was something quite different.

So what is the story I remember? It’s not in DREAMSONGS at all, but it must have been in one of those paperbacks.

Great question! It doesn’t ring a bell for me. Can anyone out there help?

It baffles the hell out of me. This was almost four decades ago, so there is always a chance that I’m making a mistake of some sort, and that it’s not GRRM at all … but I don’t think so. I wasn’t reading much SF then.

Last word from me:

I’ve studies the tables of contents of A SONG FOR LYA and SONGS OF STARS AND SHADOWS.

I looked at the page counts of the stories and read one or two online reviews or descriptions.

My reluctant conclusion is that the story I recall isn’t in either book, which means that it’s unlikely to be by GRRM at all, since those are the only books by him I had until a friend gave me DREAMSONGS — and I have good notes of my reading of DREAMSONGS.

I hate it when that happens!

Could your story be “View from a Height” by Joan D. Vinge? It does feature a woman sent on a lifetime mission out of the solar system. Looks like it was originally published in Analog in 1978, per the Internet Speculative Fiction Database: http://www.isfdb.org/cgi-bin/title.cgi?50108

Chris, thank you so much for that suggestion! I haven’t looked at the story, but I believe you may have solved it! What makes your suggestion very credible is that I have Terry Carr’s BEST SCIENCE FICTION #8 — and I had it way back then.That could well be where I read it.