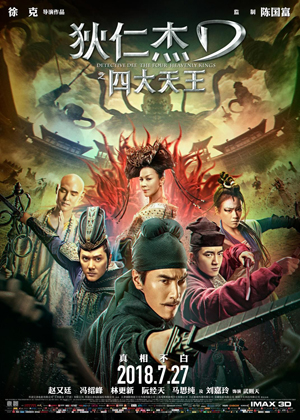 The two final movies I’d watch at the 2018 Fantasia International Film Festival were both in the big Hall Theatre. It’s perhaps appropriate that the first of those two aspired to be a crowd-pleasing blockbuster. Detective Dee: The Four Heavenly Kings (Di Renjie zhi Sidatianwang, 狄仁杰之四大天王) was directed by veteran Tsui Hark and written by Chang Chialu. It’s nominally a prequel to two other movies, though no knowledge of those films is required.

(Before the movie played we saw a short film, “No One Will Ever Believe You,” written and directed by Frédéric Chalté. A young girl wants to play a prank on her sister, and hides in her room. But she ends up becoming a witness to a supernatural horror, and by extension so does the audience. It’s a well-crafted 6-minute short shown largely from the perspective of a girl frozen in terror, and the point of view works. Shots from inside a bedroom closet through a blind emphasise the hidden viewer; it’s not surprising, maybe, that Chalté’s other short at this year’s festival, “Le otta dita della morte,” is a tribute to the surreal paranoia of the giallo film.)

For the sake of completeness, a bit of background on Detective Dee: Di Renjie was a magistrate and duke in 7th-century China who became the hero of an 18th-century Chinese detective novel by an anonymous author. (The first part of this novel, Four Great Strange Cases of Empress Wu’s reign, or Wu Zetian si da qi an, would be translated into English as Celebrated Cases of Judge Dee by Dutch diplomat Robert van Gulik in 1949; van Gulik would go on to write a series of his own about Dee’s adventures.) The novel shows Dee solving multiple crimes at once, with the help of dreams, a ghost, and a team of constables who skilled in martial arts; detective novels, as invented in China around 1600 (called gong’an fiction, “case records of a public law court”), often included elements of the supernatural as key aspects of the plot. At any rate, Judge Dee, or Detective Dee, has starred as the hero of numerous TV shows and films over the years in both China and the West.

Most relevant here, in 2010 Tsui Hark made Detective Dee and the Mystery of the Phantom Flame, written by Chen Kuofu with Andy Lau as Dee. In 2013 Hark made a prequel, Young Detective Dee: Rise of the Sea Dragon, with a script he wrote with Chang Chialu. Now comes The Four Heavenly Kings, a second prequel that’s set after the second movie but before the first one. As in the last, Dee’s played by Mark Chao, Shaofeng Feng plays Dee’s foil Yuchi Zhenjin of the Ministry of Justice, and Lin Gengxin is Dee’s friend and ally, doctor Shatuo Zhong. As the movie opens, Dee’s been granted custody of the “Dragon Taming Mace,” a magical item powerful enough to save a country from any threat, or to destroy it. The somewhat sinister Empress Wu (Caria Lau) feels threatened by the mace in Dee’s hands, and plots to regain it, enlisting the aid of Yuchi Zhenjin — and a clan of wizards. But there’s something more going on behind the scenes, involving mind control, secrets of the founding of the Tang dynasty, and the mysterious Faceless Lord. 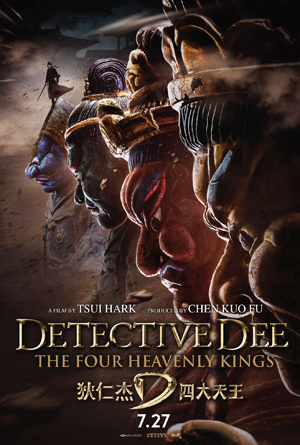 This is a busy movie, but as a plot-oriented entertainment it’s satisfactory. There are a lot of special effects, and if they’re not terribly realistic or possessed of a scrupulous regard for the laws of physics, at least they’re highly imaginative. You see a lot of different things in this movie, a giant albino gorilla and a writhing golden dragon and witchery and swordplay and wirework. If the CG is obviously unreal, at least it has some kind of consistency. There’s a feel here less like a Marvel film or a Star Wars movie than a Ray Harryhausen film, in its energy and all-ages feel and recreation of a classical world. And, like a Harryhausen film, this movie can’t be faulted for its eagerness to please.

If anything, it may go a bit too far in its spectacle. Dee recedes in this story, a background figure for much of the film. A lot of the action’s carried by Shatuo Zhong, who begins a fraught relationship with a lady assassin. But beyond those characters we get a range of subplots and interactions and villains. The moments of spectacle don’t come out of nothing; they’re the product of a busy plot with multiple factions.

But this isn’t Game of Thrones. This is a colourful, all-ages adventure movie. It’s filled with broad comedy moments, fights, and spectacle. It doesn’t worry about realism, or indeed about strict adherence to history. (Empress Wu, a real figure much criticised and likely much traduced, does not come off especially well here.) It’s primarily about entertainment. As a result, there isn’t much mystery here, or at least not much fair-play mystery. We do get a sequence of Dee analysing a crime scene and deducing what the villains are up to. And later there are some carefully-laid plans based on his unravelling of the plots at work. But the story is less driven by the application of rationality than a storyteller’s manipulation; what happens is what the director wants to happen, and the scenes that follow each other don’t have a feel of inevitable logic but of narrative energy. We see stuff because the stuff is cool, not because they’re inherent to the working-out of mystery.

That’s not a bad thing in itself, merely an observation of the feel of the film. But I do feel that the movie’s climax has a touch of anticlimax to it. A character shows up to rescue the main cast. CG imagery is everywhere, and the real-life characters get lost. There’s a bit of a sense that the story increases its scale just because it must; it ends with a big battle because it must have an ending and that ending must be the largest set-piece of the film.

Overall, though, this is a solid film that knows what it is and hits its marks. Having seen the previous movie in the series, I’d say that Detective Dee: The Four Heavenly Kings is just what you want out of a new entry in a franchise: it follows in the footsteps of earlier entries but gives you more of everything. As a blockbuster, it’s entertaining but not perhaps in the first rank — less satisfying than, say, last year’s Wu Kong, if still engaging in its own right. It’s not as fast-paced as one might expect, but still tells a satisfying and complex story with lavish and imaginative effects. It doesn’t reinvent the wheel, but does just what it wants to do.

I like the Detective Dee films. I’ll have to pick this one up.