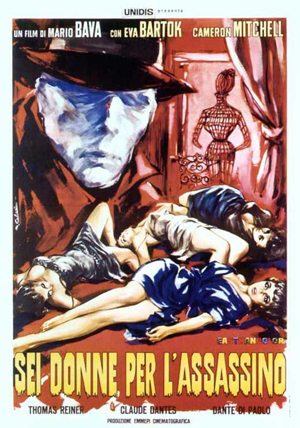 On the evening of Thursday, July 26, I made my way to the Cinémathèque Québécois, well east of the main Fantasia theatres, for a screening of a film classic. Fantasia was presenting Mario Bava’s classic 1964 horror-mystery film Blood and Black Lace (Sei donne per l’assassino). It’s one of the first giallo films, a genre of surreal thriller particularly identified with Italian directors. This was the original 88-minute Italian version, restored by Arrow Films for their recent blu-ray edition of the film.

First came a short written and directed by Frédéric Chalté, “Le otto dita della morte.” It’s a trailer for a never-made giallo film, and a fun four-minute run-through of the genre hallmarks. Full, rich colour; split-screen images; a gloved hand; it’s a clever homage to the giallo tradition. The soundtrack was I thought particularly strong.

Bava’s Blood and Black Lace has a script by Bava, Giuseppe Barilla, and Marcello Fondato concerning murders in and around a fashion house. The house, managed by the duo of Max Morlan (Cameron Mitchell) and his lover, the Countess Christina Como (Eva Bartok), is based in a rich old mansion and employs a number of beautiful models, one of whom, Isabella (Francesca Ungaro), is murdered by a killer in a featureless mask. Her diary comes to light, a key to the secrets of the fashion house, which involve abortions and blackmail and cocaine. More murders follow as characters scramble and conspire to get the diary. One character’s tortured. Meanwhile the police are helpless. It all ends in death and betrayal.

The plot’s complex, but not as strange as the movie’s reputation led me to expect. While intricate, it’s perfectly comprehensible, and even possible for a watcher to work out ahead of time. The biggest surprise is the lack of exploration of character — there are a lot of faces at the fashion house, but few show a detailed personality behind them before they end up dead. In this way the narrative of the movie comes to feel a little dreamlike; it’s not confusing, but the way characters are introduced and then disposed of is unusual. At less than an hour and a half, it moves quickly enough that it’s difficult to anchor oneself in any one character — it’s hard to find a traditional lead character here until the film’s over and we realise the killer’s motives. 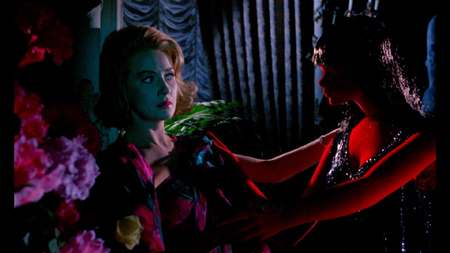 Mainly, though, the strangeness here emerges from the visuals. And this is not a bad thing. The movie looks spectacular. Saturated colour pops off the screen and gives a kind of psychedelic aura to everything that happens. Shadows are deep and black. Most of the time there’s a high contrast to everything on the screen. It strikes me that the exception tends to be when the police appeared, as though their rationality is fatal to the otherwise hallucinatory quality of the movie.

Of course, another way to look at it is to say that the police don’t appear on screen at the same time as the killer. The movie tends to break down into a series of sequences, most of which involve the faceless murderer chasing a victim. This is less of a problem then one might imagine, in part I think because these sequences become something like a musical number in a musical or a fight in a super-hero movie: sequences structurally integral to the film, sequences that advance the theme as well as the plot. 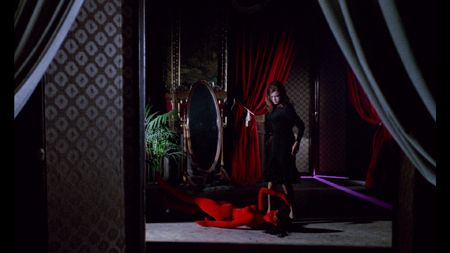 The other reason these sequences work is simply that they look spectacular. Sets are intricate, and apartments filled with clutter. The architecture gives the victims lots of space to scurry through before being caught. Is it sadistic to watch? One might argue that, but the point seems unnecessarily puritanical. I would say there’s a nightmare quality; one follows hunter and prey at the same moment. It is true that there’s a surprising level of violence and of sex for 1964. But (at least from the perspective of someone coming to it first in 2018) the movie doesn’t strike me as primarily interested in exploitation.

I will say that there’s sometimes an odd sense of liberation during the chase scenes; a sense that the movie here is free to do as it wishes. On the other hand, as I said, it’s duller when the police are around. It’s as though the movie’s an exercise in freeing the id, an impression exacerbated by the fact that the cops never seem able to do much. Instead the killer’s more memorable, more eye-catching: face swathed in a pale fabric beneath a dark hat and coat, the image seems a direct inspiration for Steve Ditko’s character The Question (or, conversely, was perhaps inspired itself by the Dick Tracy villain The Blank). The facelessness may emphasise the mystery of the character — who could this be? — while allowing the film to follow the killer without worrying about revealing the killer’s identity. But then it also perhaps does encourage us to identify with the murderer. Dramatically the murderer’s effectively the protagonist, the character who seems to be taking the most direct action to accomplish their ends; we’re therefore predisposed to follow them. Even though we know nothing about them: again, like something out of a dream, a person with immense latent significance but no explicit identity. 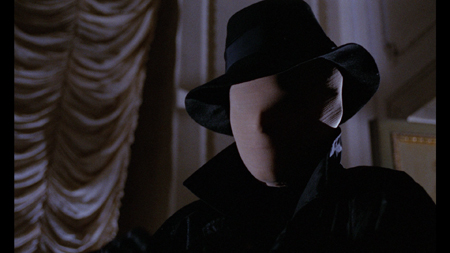 The diary, the MacGuffin that’s the focus of the interest of the killer and the other characters, ends up something of a damp squib. We never do find out what secrets are held inside its pages. It’s a way to set things in motion. (It also feels like another element on the film with direct influence on later popular culture: a diary with red covers of a murdered girl full of secrets, and specifically secrets around cocaine use, was a key plot element in the original Twin Peaks.)

To me, what’s startling in the end is the architecture of the grand mansion that’s home to the fashion house. In a movie filled with back rooms and disused stairs, the neoclassical feel of the building gives a kind of gothic decayed richness to everything that happens within it. It’s a place where a man’s uneasily in charge of a tribe of women, each with their secrets, and a place where disturbing violence is conceived and occurs. There’s a haunted-house feel, though there’s nothing supernatural in the film. It’s a place that, visually and otherwise, is heightened above reality; a place that isn’t quite right.

I wonder if this movie can’t be viewed as a reaction against neorealism, which had been so dominant in Italian cinema in the 40s and 50s. Much as Fellini and Antonioni had broken away from realism, Bava here is rejecting it even more profoundly, with the genre sensibility as well as the social class of the characters and the visual scheme utterly abandoning the realistic. It seems to me that the film’s a success precisely because it goes beyond the real so completely, because it abandons conventions of character and builds a world all of its own. But then even to say that may be missing the point. There’s a hypnotic quality to the film, a purely visual magnetism. It’s lurid and violent and nightmarish, and that’s what makes it work. It’s not a movie that can be easily captured in words, and that is why it works so well.