I’ve been buying up back issues of Science Fiction Eye, one of the better SF review zines of the 90s. SF Eye had a marvelous stable of hot young writers, including Bruce Sterling, Richard Kadrey, Paul Di Filippo, Pat Murphy, Gary Westfahl, Tony Daniel, Charles Platt, John Shirley, Jack Womack, Elizabeth Hand, Mark Laidlaw, and many others. I thought I’d enjoy revisiting the cutting edge genre journalism I found so thought provoking two decades ago, but what I really find entertaining this time around is the high quality reviews. Especially coverage of now-forgotten books like Colin Greenland”s Take Back Plenty (1990) the opening novel of his gonzo space opera trilogy featuring Tabitha Jute. Here’s a snippet of Sherry Coldsmith’s excellent review, from the Winter ’91 issue, which I bought on eBay last month for $7.50.

Take Back Plenty is a raid on the traditional space opera, a coup at the galactic palace. Its author has poked through the rubble of pulp SF, looking for the genre’s mermaids and Marie Celestes. Greenland’s pickings include a fecund Venus that chokes with unconquerable jungles, and an arid Mars scarred by canals. More modern tropes are also put to use: cyberjacks, talking corpses, titanic tin-can inhabitants that circle the Earth. Greenland has chucked away anything that requires scientific veracity and kept anything that possess mythic dazzle.

The protagonists are as fascinating as the background. Tabitha Jute is the owner-operator of a space vehicle, the sentient and personable Alice Liddell. These two soul sisters of the Sol system get into love and trouble in a world that Is a surreally logical as the one the bedeviled Lewis Carroll’s Alice.

Take Back Plenty won both the British Science Fiction and Clarke awards for Best Novel; it was followed by two sequels, Seasons of Plenty (1995) and Mother of Plenty (1998). Greenland’s last two books, Spiritfeather (2000) and Finding Helen (2003) appeared only in the UK. You can read Coldsmith’s complete review of Take Back Plenty (and the tail end of the enthusiastic notice of Crichton’s Jurassic Park) here — page 1 and page 2. See all our recent Vintage Treasures here.

The covers make me think it’s (Ms.) Shaft In Space.

The thing that struck me most about the covers to the series is that American version completely whitewashed the heroine. Here’s the 1992 AvoNova paperback, the first US edition, released two years after the British version. 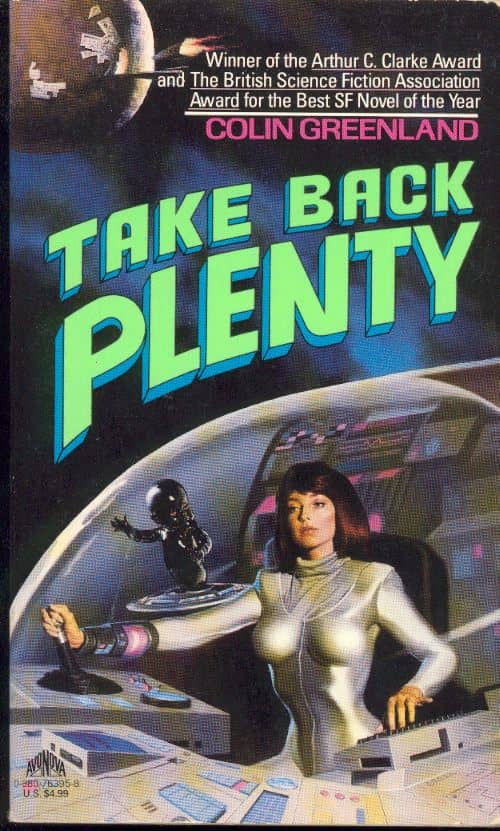