Samuel R. Delany is one of the greatest science fiction writers alive today. He got his start when his wife Marilyn Hacker became an assistant editor at Ace Books under Donald A. Wollheim, and helped him publish his first novel The Jewels of Aptor as an Ace Double in 1962, when he was just 20 years old. Since then he’s won virtually every award our field has to offer, including the Hugo, Nebula, and Locus Awards. In 2013 the Science Fiction Writers of America named him a SFWA Grand Master.

I’ve steadfastly collected the various paperback editions of Delaney’s books over the years, including his classics The Einstein Intersection (1967), Nova (1968), Dhalgren (1975), and Triton (1976). I believed (rather reasonably, I thought) that I had all of his major work. So earlier this year I was more than a little surprised to stumble on one I never knew existed: The Bridge of Lost Desire, a 1988 collection of three fantasy novellas from St. Martin’s Press.

The Bridge of Lost Desire is the fourth and last volume in Delany’s Nevèrÿon fantasy series. Unlike his science fiction novels, the Nevèrÿon books were never particularly popular, and have been out of print for over two decades. The first three were published as paperback originals by Bantam Books between 1979-85, with gorgeous covers by the fantasy artist Rowena. The Bridge of Lost Desire was first published as an Arbor House hardcover, and reprinted in what I can only assume was a poorly distributed mass market paperback edition by St. Martin’s Press in 1988.

Three of the books are collections; only one, Neveryóna or: The Tale of Signs and Cities, is a full-length novel. Tales of Nevèrÿon originally appeared in September 1979 with a cover by Louis S. Glanzman; it was reprinted in 1983 with a Rowena cover when the second volume arrived.

The books in the series are (dates are for the mass market paperback editions):

All three Bantam paperbacks had striking wraparound cover art by Rowena Morrill, which the thumbnails above fail to fully capture. I’ve included the full versions for all three in greater detail below — click the images for bigger versions.

There were also British editions from Grafton, with covers by Pierre Lacombe (see below).

Seven years after the appearance of the final volume, Wesleyan University Press reprinted the entire series in a set of four handsome matching trade paperbacks (below). To my knowledge this is the only complete edition from a single publisher in the US.

The Bridge of Lost Desire originally appeared as a slender hardcover from Arbor House in November 1987, with a very different cover by Ned Dameron. 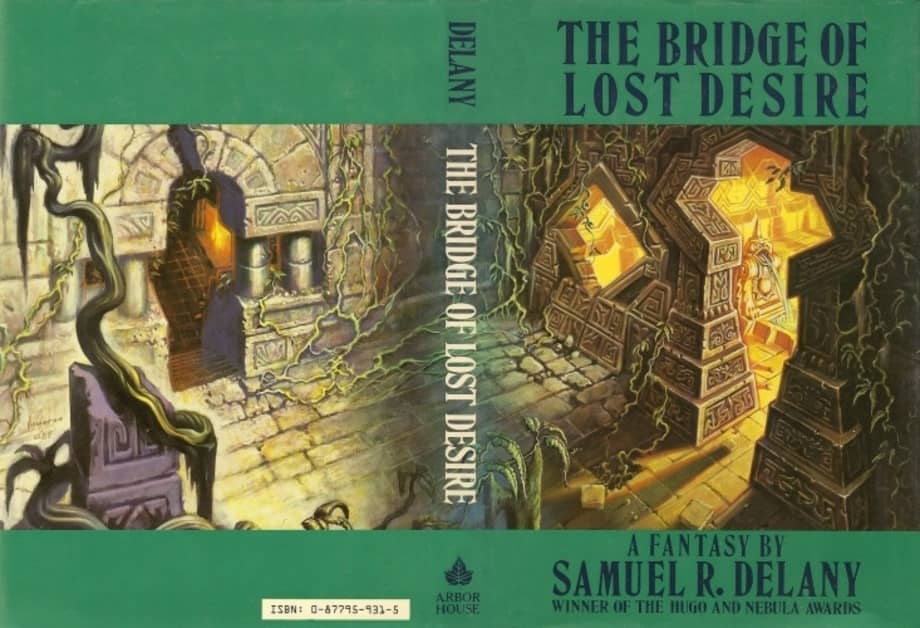 And here’s the full wraparound art for the paperback. 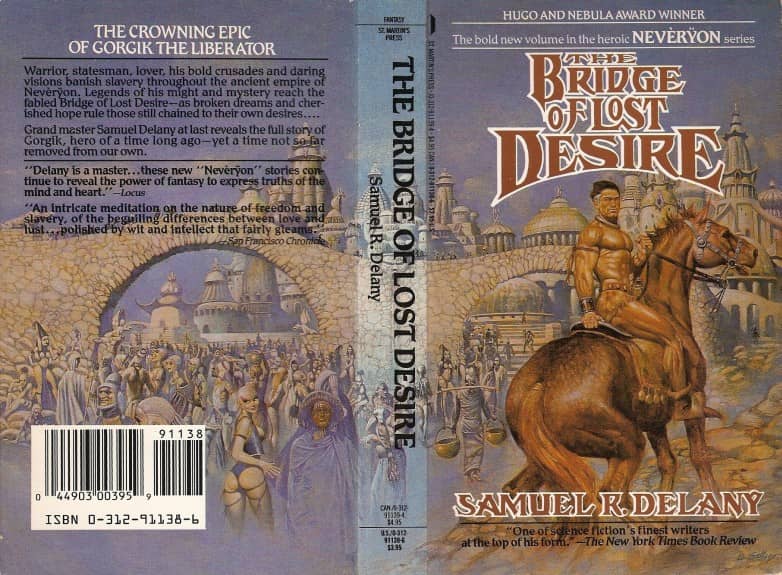 Fans of Delany’s early work may find, as I did when I eagerly picked up Tales of Nevèrÿon as a teenager, that it’s very different from his fast-paced science fiction. The tales are much slower paced, and delight in exploring the characters and the world. I put the book down unfinished at the time, and clearly I wasn’t the only one. The books have been out of print for two decades, and haven’t had a mass market edition since the 80s.

But I think it’s past time for me to revisit Delany’s thoughtfully crafted fantasies of Nevèrÿon, and The Bridge of Lost Desire looks like a great place to start. It includes three long novellas, only one of which, the Nebula nominee “The Tale of Gorgik,” was previously published.

Here’s the complete Table of Contents for The Bridge of Lost Desire.

See all our most recent Vintage Treasures here.

they are all available on kindle too, if you just want to read them and not collect. seem interesting, thanks!

Me! I love having an entire library on my Kindle–not to mention the ability to carry that library with me when I’m travelling. I still collect physical books (when they are special to me), but I’d rather read on a Kindle these days. Another great thing about it is finding rare and out-of-print books that have come back in electronic editions–sometimes without even a print edition. So it’s nice (for me anyway) to have both a physical “library” and an electronic “library.”

Can’t believe I’ve never really heard of this series before–it seems like a very rare case of someone being acknowledged for bringing a literary sensibility to sword-and-sorcery. Which is something that happens quite often, but is never truly recognized by publishers, reviewers, or most fans. I will definitely have to check out the first Neveryon book. Thanks!

I remember trying to read some of the Neveryon books back in high school, but admit that I always bounced off of them.

There was an excerpt from one in Paula Guran’s recent Swords Against Darkness anthology, though, that I did read & enjoy; so maybe it’s time to give it another try.

These books are among my favourite, especially Tales of Neveryon and Neveryona…simply incredible.

I remember seeing the second set of covers in the book store, but didn’t then and, to be honest, still don’t have sufficient interest to pay money to read them.