Driftglass was Samuel R. Delany’s first short story collection, and it was like a bomb dropped on science fiction.

Delany’s first work of short fiction, “The Star Pit,” appeared in the February 1967 issue Worlds of Tomorrow, and was nominated for a Hugo Award for Best Novella. That same year his groundbreaking “Aye, and Gomorrah” appeared in Dangerous Visions, and was nominated for a Hugo and won the Nebula Award for Best Short Story. Over the next two years Delany would receive an extraordinary eight Hugo and Nebula Award nominations for a string of brilliant stories, including “Driftglass,” the novella “We, in Some Strange Power’s Employ, Move on a Rigorous Line,” and the Nebula and Hugo-winning “Time Considered as a Helix of Semi-Precious Stones.”

All those stories, and five others, were gathered in Diftglass. It was the top-ranked collection of the year in the annual Locus Awards poll in 1972, beating Theodore Sturgeon’s Sturgeon Is Alive and Well…, Harlan Ellison’s Partners in Wonder, and Larry Niven’s All the Myriad Ways (and even placing above The Science Fiction Hall of Fame, Volume One on the overall list).

Driftglass was published in hardcover by Doubleday and the Science Fiction Book Club in July 1971, and reprinted in paperback by Signet four months later. Here’s the TOC, with award notes on the stories.

It was reprinted in the UK by Panther in 1980, with a new cover by Chris Foss. 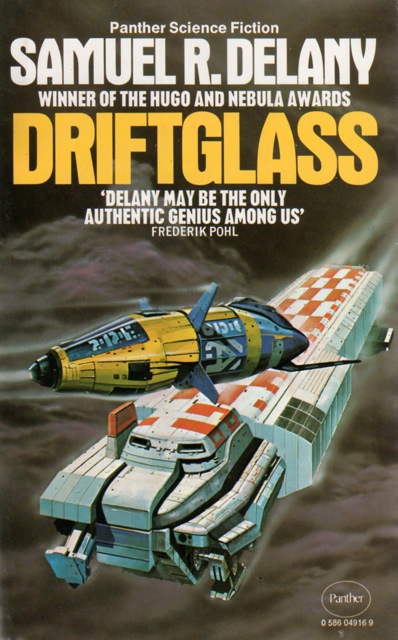 Note the stellar quote from Fred Pohl on the cover (an assessment I happen to agree with).

Driftglass was widely reprinted in the 70s and 80s, but the last printing was in 1986. The novella The Star Pit was reprinted separately in 1989 as part of the Tor Double line, Tom Doherty’s attempt to launch a modern version of the Ace Doubles with back-to-back novellas. It was paired with John Varley’s Tango Charlie and Foxtrot Romeo (covers by Tony Roberts and David Lee Anderson.) 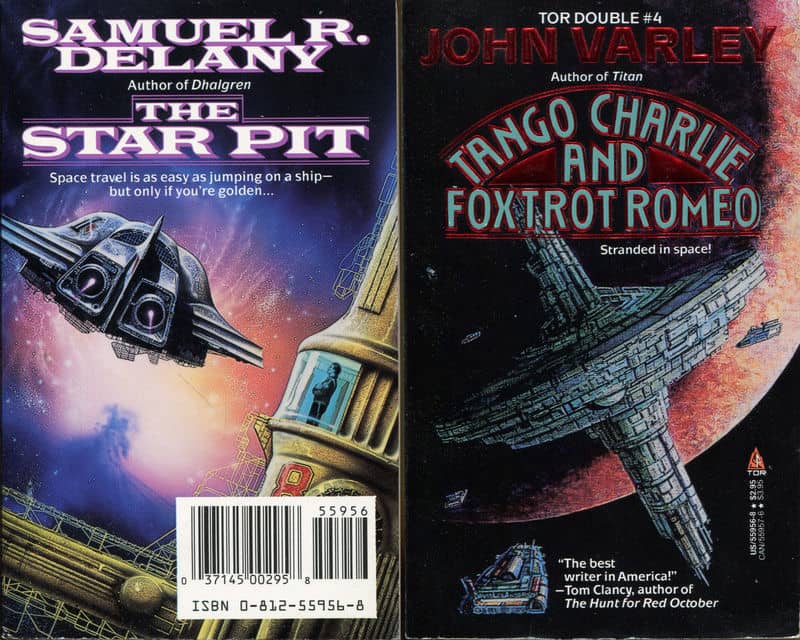 Delany’s long-awaited second collection, Distant Stars, was published by Bantam in 1981. Many of the stories from this collection, plus a handful of new ones, were combined with the contents of Driftglass and published by Grafton in 1993 as the massive 535-page omnibus collection Driftglass/Starshards. 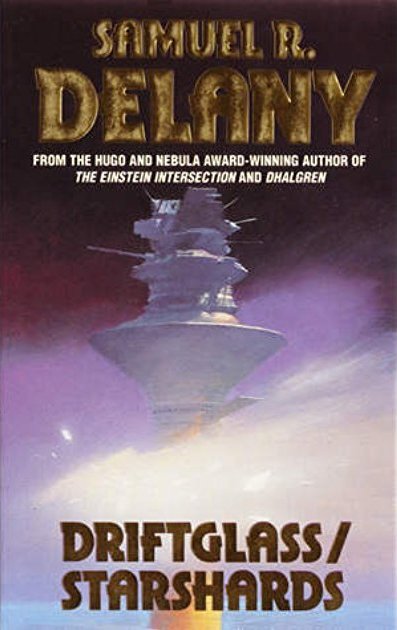 Driftglass/Starshards was only published in the UK, and has never been reprinted. Which is irritating, as I’d love to have a copy. Fortunately most of the contents (with the exception of the linked tales “Citre et Trans” and “Erik, Gwen, and D.H. Lawrence’s Esthetic of Unrectified Feeling,” which were collected in Atlantis: Three Tales) were reprinted in the 400-page Vintage collection Aye, and Gomorrah: And Other Stories (2003), which is still in print and is highly recommended. 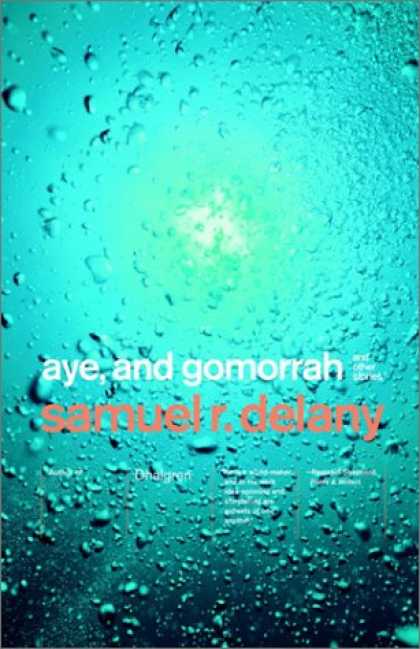 Of course, the collectors in the audience won’t be satisfied with anything other than the original vintage paperback edition. Copies are generally inexpensive, though I’ve found Driftglass to be a fairly scare book, and in fact almost never come across it when hunting at conventions and in used bookstores.

As usual, if you’re interested in a copy I recommend shopping for collections rather than paying premium prices online. After years of looking for a copy, I finally found one in beautiful condition last month as part of an eBay collection of 31 largely unread vintage science fiction paperbacks offered for $25. There were plenty of other books in the set I was interested in (including Who? by Algis Budrys, The Long Winter by John Christopher, and Friends Come in Boxes by Michael Coney), so this was definitely the most economical way to get my hands on a copy. 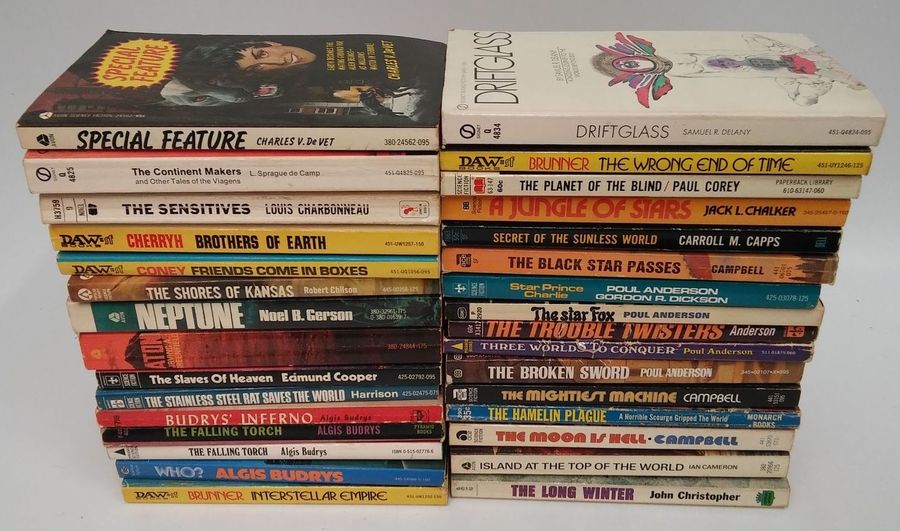 Driftglass was published by Signet/New American Library in November 1971. It is 278 pages, priced at $0.95 in paperback. The cover is by Bob Pepper.

DRIFTGLASS is one of the great single author collections in SF history. It is wonderful through and through — everybody knows “Time Considered as a Helix of Semi-Precious Stones” and “Aye, and Gomorrah”, but my favorites might be “The Star Pit” and “High Weir”.

There’s some nice books in that pile you show — I’d try the Budrys books for sure, and Brunner’s INTERSTELLAR EMPIRE is lots of fun.

I still have my original copy of Driftglass. A prized possession, not so much for the book itself, but for the author and his stories. I reread this frequently, and could never part with any of the many Delany books I own.

> There’s some nice books in that pile you show — I’d try the Budrys books for sure,
> and Brunner’s INTERSTELLAR EMPIRE is lots of fun.

I knew you’d approve of the Brunner!

Believe it or not, I’ve never read C.J. Cherryh’s BROTHERS TO EARTH or Poul Anderson’s THE BROKEN SWORD either. This was a great little set of paperbacks for me.

> I reread this frequently, and could never part with any of the many Delany books I own.

I was very pleased to see a recent story from Chip in F&SF magazine. Rich listed it as one of the best stories of the year in his Hugo article yesterday. Check it out if you have a chance!

The Cherryh & Anderson books are both highly recommended; and additionally, Broken Sword looks like the Ballantine Adult Fantasy edition.

I’m guessing Island at the Top of the World is a novelization of the Disney film? Or is the film an adaptation of the book?

BROTHERS OF EARTH is one of my very favorite Cherryh novels.

Everyone calls THE BROKEN SWORD one of Anderson’s best novels, and yet I have never read myself! I must get to it someday. I think at the time I was reading tons of Anderson all I wanted was SF, no Fantasy, and I never got back to THE BROKEN SWORD later.

I keep hoping we’ll get a Kindle release of the Cherryh omnibus with Brothers of Earth and Hunter of Worlds.

I admit I’ve never quite been able to crack Delany. I know I checked Triton out from the public library back in my high school days, because it had a really, really great cover, but I’m not sure if I ever made it all the way through the book. I’ve also tried Neveryon a few times, but it never quite clicked for me. Someday I’ll give it another try.

TRITON and NEVERYON are in their different ways harder to get into than earlier Delany, I think. (TRITON in particular, which has a profoundly unlikeable main character.)

I would suggest starting either with DRIFTGLASS, or, if short stories aren’t what you want, with NOVA.

Nova is definitely one of my favourite SF books of all time, but the Neveryon books have some of the most beautiful language and sentences I’ve ever read. Outstanding. John, I tried and tried to locate a copy of F&SF with that Delany story in it, but I don’t think they’re being distributed here in Atlantic Canada anymore. A damn shame. When I was younger I bought all the digest magazines each and every month, as well as the larger format SF mags. Gone are the days, I guess.

Well, “The Hermit of Houston” will be available in The Year’s Best Science Fiction and Fantasy 2018, edited by yours truly. 🙂