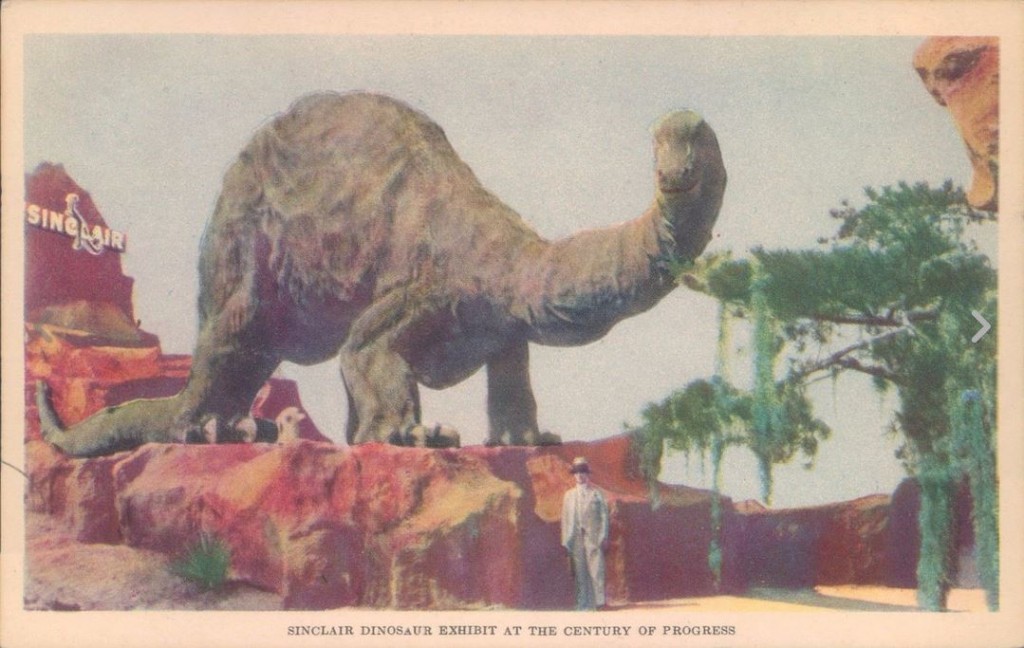 Oil comes from dinosaurs. That’s not true, but millions of kids in the 20th century knew this as a fact. They were the victims of one of the most wildly successful marketing campaigns of all time. Or maybe the marketers were, because their modest claims were equally wildly misinterpreted by a wholly credulous audience of scientific illiterates. How do I segue from oil and dinosaurs to robots? Just like every other journey I’ve ever taken I do it by changing planes in Chicago.

Sinclair Oil, founded in 1916 by Harry Sinclair, boasted of using only Pennsylvania crude oil in its products. What was special about Pennsylvania crude? The marketing department came up with an answer: it was very old, formed in the Devonian period, then thought to be 100,000,000 years earlier. (The Devonian was actually closer to 400,000,000 years ago but it’s hard to blame them for not knowing future science.) What best symbolized the world 100,000,000 ago? Dinosaurs! The text accompanying the ads never directly said that oil comes from dinosaurs. It also never directly said that older oil was better than younger oil. (Although the company would later on.) Even so, you’d have to give your reasoning processes a swift kick not to assume from the ads that longer mellowing is better, like fine bourbon.

The ads worked wonders. In 1932 Sinclair trademarked Dino the dinosaur, a Brontosaurus (now known as an Apatosaurus: a bitterer pill for us oldtimers to swallow than the demotion of Pluto to non-planet status), as instantly recognizable to generations of kids and adults as Mickey Mouse.

Sinclair was planning ahead. At the same time they hired P. G. Alen to create an exhibit for the 1933 Chicago Century of Progress Exposition, the giganto-rific World’s Fair whose theme was the wonders of science and all the good stuff it would give the public once this icky Depression was over. Alen gave Sinclair – and the American public – just what they wanted: big-as-life battling robot dinosaurs. 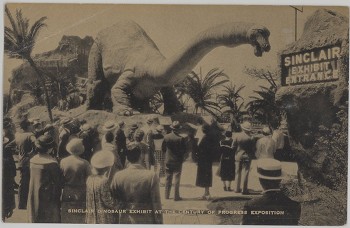 Sinclair Oil’s seven life-sized dinosaurs and a giant dinosaur-based diorama were the main attractions. At the exhibit, a moving “Magic Skyway” took visitors back through time, where they encountered a 50-foot-long Brontosaurus (having a 16-foot-long neck) and a faceoff between T. Rex and Triceratops. T. Rex and Triceratops lunged at each other “by means of eleven automatically controlled electric motors.” The exhibit by Sinclair – one of the first corporations to market their product with dinosaurs – was the first outdoor recreation of a portion of prehistoric Earth. The exhibit’s two-ton Brontosaurus was the largest animated animal in the world, as well as the most popular animal in Sinclair’s exhibit. More than 15 million people toured the Sinclair exhibit to see Brontosaurus, Stegosaurus, Tyrannosaurus, Triceratops, Protoceratops, and Trachodon, which were based on paintings by Charles Knight [an eminent museum muralist, whose mural of battling dinosaurs at Chicago’s Field Museum was world-famous]. 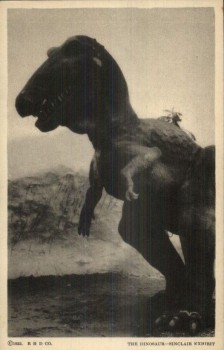 Sinclair printed a million copies of a fake newspaper to hand out to the crowds, wringing every superlative out of the exhibit, and when copies of that ran out, printed a second edition of another million.

Alen’s dinosaurs put on a show for the crowds coming off the “Magic Skyway.” Allen A. Debus described the spectacle:

Alen incorporated motors into huge steel reinforced bodies (covered with rubber hide for skin) that swiveled heads of tyrannosaur and three-horn, and turned the sauropod’s twenty-foot-long head while curling its thirty-foot-long tail. … the models also “growled.” …

Although “Brontosaurus” was the largest animal in full public view, the influential Tyrannosaurus (lauded as “killer of all monsters”) versus Triceratops (billed as “Nature’s bad dream”) commanded a greater sense of awe, mystery, and perhaps horror. Surely, Fair-goers would have agreed this was the ultimate, “Battle of the Centuries! Each day at the Sinclair World’s Fair Exhibit a battle scene is re-enacted between Tyrannosaurus Rex, the most ferocious animal ever known, and his ancient foe Triceratops. These animals actually lunge at each other while visitors gaze in awe from the ‘ringside.'” 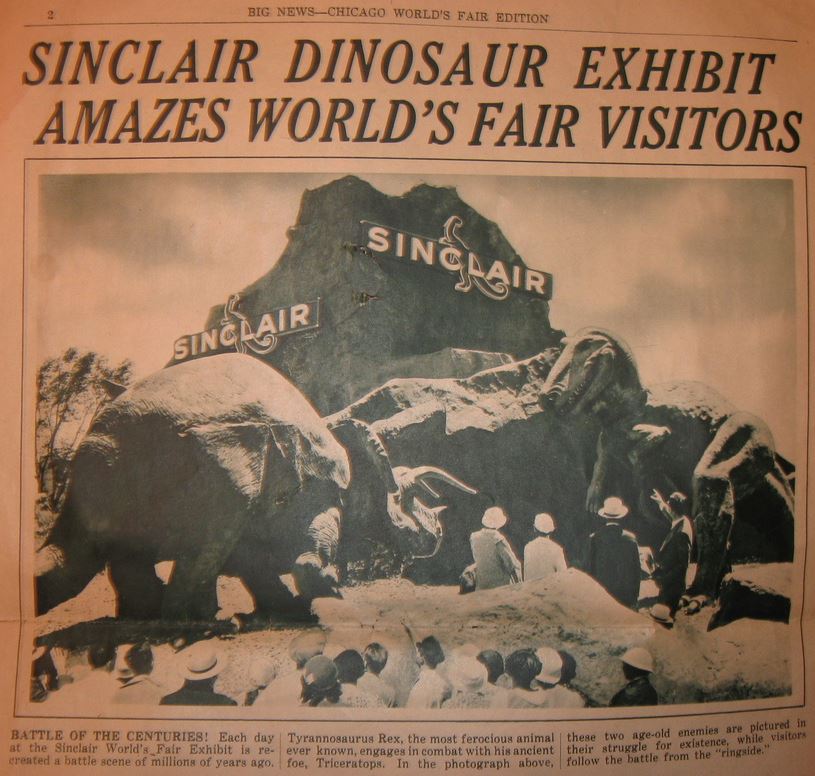 The association between dinosaurs and oil gripped the limbic brains of the collective public like T. Rex jaws, never to be pried open. Sinclair ensured the connection by reproducing the exhibit at the 1936 Texas Centennial Exposition and unveiled an embiggened 70-foot dinosaur in Sinclair’s “Dinoland” Pavilion” at the 1939-1940 New York World’s Fair. 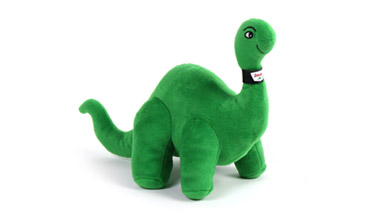 The association of powerful animals with powerful fuel is primal, a brilliant stroke on Sinclair’s marketer’s part. Making a toy out of an animal whose image is being sold to you as dead, decayed, turned into tar, and sold as stinking liquid you don’t want anywhere on your body is a far more difficult mental leap. Even an Olympic ice skater couldn’t land it. Yet there Dino stands, beloved, venerable, even brought to “life” as the family pet on The Flintstones. Popular culture continues to baffle me, however much I study it.

Steve Carper writes for The Digest Enthusiast; his story “Pity the Poor Dybbuk” appeared in Black Gate 2. His website is flyingcarsandfoodpills.com. His last article for us was If – Intelligent Robots Are Achieved.

I loved Dino as a child. Had an official Sinclair Dino inflatible about 3 feet long.

As writers, we can “Embiggen” the language can be modified if used in stories, enough people find if “Cromulent” and it’ll become official.

So, if you please, make sure to make mention of “The Research Base on Planet Pluto…”

Character A – “Heard the Sinclair interplanetary corporation funded it in exchange for the Solar System’s biggest Brontosauraus model that holds up the launch ramp. It’s even bigger than the one they set up next to the Playboy industries Pleasure Dome on Planet Ceres!”

reply Character B – “Oh, yeah, those whining Scienticians didn’t find that Cromulent…well boo hoo to them!”

Yeah – PLANET Ceres, just to jab them in the Eye, using the reason they used to demote Pluto. Let’s have a little “Ignorance is Strength” ourselves, not just the Nucking Futz Fundiez and MAGA crowd…

Current paleontological research has separated Apatosaurus and Brontosaurus into different genera, so we do have Brontos again.

And Pluto is not a “non-planet”, it is a “dwarf planet”, of which there are many, many thousands (or so it is predicted). So, it has moved up to a larger class of celestial bodies. Not too shabby!

Thank goodness we now live in a time when people aren’t gullible enough to believe in fake science.