Dungeons & Dragons 5th Edition seems to have a good handle on what’s needed for a rule book, and what’s needed for an expansion. Like its immediate predecessor, Xanathar’s Guide to Everything, Mordenkainen’s Tome of Foes covers a variety of topics. It’s meant to fill in some gaps for specific areas players and game masters might want to have more detail about.

It’s broadly divided into two sections: five chapters devoted to the history of different races and their factions and how they can be used both by the GM and the players, and a generous bestiary stuffed full with old favorites and permutations of them that haven’t reappeared yet.

This includes new monsters and monsters specifically related to the first half of the book. You’ll see what I mean shortly.

It’s a great book, probably my favorite yet of the expansions, and maybe the first one I’d consider a must-have for all campaigns, owing to the wealth of information provided on basic character races like Elves and Dwarves.

Don’t get me wrong, I think most game masters would want Xanathar’s Guide on their shelves, because it offers so many tweaks and suggestions. But I believe Mordenkainen’s Tome will be even more broadly useful to a slightly higher percentage of players

I must be the odd man out, but I’ve never been especially interested in demons or devils, and the fascination many have with them has always baffled me. So I probably wasn’t the target audience for the first chapter, devoted to the long war between the two races, but darned if I wasn’t impressed anyway.

No, I’m not suddenly inspired to run a campaign centered on interactions with the infernal, but there’s a lot of cool and clever information, and, should this be more your cup of tea, some interesting hooks. It’s also rounded out with lots of ideas that can help players flesh out their Tiefling characters.

The next chapter does a bang-up job fleshing out the elves and their mysteries, including the Drow. Even if you’re not playing a fantasy campaign in the Dungeons & Dragons campaign settings, you’re going to find a lot to love here, because it’s chock full of cool things to do with elves, the gods they worship, and ways that characters can be tweaked and expanded using the material within.

My favorite section may be the creepy business with an entity known as the Raven Queen, who rules her twisted elves from a sinister plane called the Shadowfell. But there’s a lot to like throughout.

The next three chapters are similar in construction and approach, dealing in turn with: 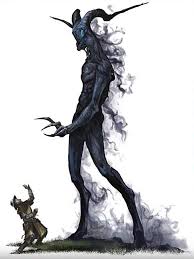 As mentioned previously, the monsters/encounters in the back of the book help flesh out the information seen in the first half of the book. So, for instance, there are plenty of demons and devils, including their rulers, there are stats for more Drow, and Gith, and Duergar and Derro, and then there are other creepy, disturbing entities that will likely inspire great adventures or nightmares or both… along with the occasional being that might be an ally.

Oh, and maybe it should go without saying, but the art is really striking in this one. Almost all of the beasties in the back half of the book are brought dreadfully to life. Great stuff.

This one gets two thumbs way up from me. Referring to my review of Xanathar’s Guide earlier this year, I see that I gave it a 9.5, docking it only because I thought it wasted space on a mostly useless appendix. I don’t think the Tome can be knocked for anything at all, so that means it gets a whopping 10. Wow.

Howard Andrew Jones is the author of the historical fantasy novels The Desert of Souls, and the The Bones of the Old Ones, as well as the related short story collection The Waters of Eternity, and four Paizo Pathfinder novels. The first book of his new series launches next spring. You can keep up with him at his website, www.howardandrewjones.com, and follow him on Twitter or follow his occasional meanderings on Facebook.

I’ve been consistently surprised at how well Wizards is managing their DnD brand. This book is fantastic.