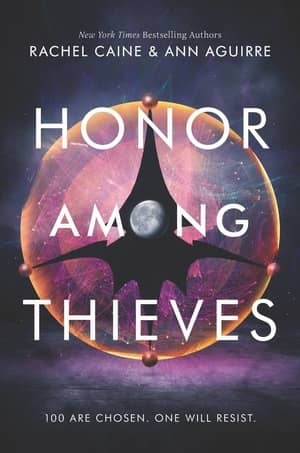 More than anything, teenager Zara Cole wants to be free. That’s why she lives on the streets, snatching purses and thieving, rather than immigrating to Mars with her mother and sister. She can’t stand the thought of being trapped in a dome. When a rich girl waltzes through Zara’s seedy neighborhood without taking the most basic precautions, she can’t resist a slash and grab.

But the rich girl isn’t the easy mark Zara thought it she’d be. Sure, the girl herself does nothing but scream. But it turns out her daddy’s the cruel and ruthless crime boss Deluca, who sends a goon to kill Zara and recover his goods. It’s probably quite the surprise for the goon when he’s the one who ends up dead, instead.

Zara’s got blood on her hands, but she doesn’t feel guilty. Still, it’s not obvious how she’s going to hide from Deluca, now that she not only has what he wants, but also dispatched one of his men. The safest place she can think of is a jail-like rehabilitation facility called Camp Kuna. To get herself sent there, she sneaks back into her juvenile group home, where her official guardian helps her create the necessary scene of violence.

But even donning her orange jumpsuit and getting locked in a cell doesn’t keep Zara out of Deluca’s reach. The crime boss bribes a fellow inmate – the closest thing Zara has to a friend in Camp Kuna – to murder her. When Zara survives the strangulation attempt, she realizes nowhere is safe.

Rescue comes in the strange form of the alien species called Leviathan, who are living spaceships that look like whales. In exchange for reversing the effects of global warming, the aliens require humanity to offer a hundred volunteers to travel inside them every year. Called the “Honors” program, the chosen humans become celebrities, feted worldwide as the best and the brightest. Nobody knows what the Honors do during their year of service, but the aliens usually pick eminent scientists and musicians. Until recently, when they picked two military strategists.

This year, they pick Zara.

Zara couldn’t handle the Mars dome. She can’t possibly live inside an alien starship for a year. But with Deluca hunting her on Earth, accepting her selection as an Honor is her only shot at survival. Why would the Leviathans want her, though?

Maybe they need a thief.

Or maybe, like a former Honor bursts through her security cordon to tell her, everything’s a lie. As Zara departs to take up her position, she doesn’t know what she’s getting into. All she knows is that she has no choice but to go.

The intrigue only grows deeper as Zara ships out to join Hadim, her appointed Leviathan spaceship, and it becomes clear that the aliens are keeping secrets from humanity. Honor among Thieves provides a fast-paced read with a twisty plot. While the 2018-release from Katherine Tegen Books is marketed as YA, there’s nothing in it to dissuade adults from enjoying it, too.

Both Rachel Caine and Ann Aguirre are best-selling authors in multiple genres and for both adults and teens. Amazon currently lists the price as $9.99 for paperback or Kindle ebook and $12.69 for hardcover. Read the first two chapters at Epic Reads.