Sam Merwin Jr. was one of the most influential SF editors of the pulp era. He took over the reins at Thrilling Wonder Stories and Startling Stories in Winter 1945 from Oscar J. Friend, and immediately adopted a more mature attitude, attracting more adult readers and better writers. At first he assumed Friend’s editorial pseudonym, Sergeant Saturn, but eventually he simply went by the title Editor. By 1950 he was also editing Fantastic Story Quarterly and Wonder Stories Annual, making him one of the most important names in the field. His letter columns were avidly followed by fans of all ages, and he’s widely credited with steering his SF magazines out of the kid’s section and towards an adult readership.

Merwin quit editing in 1951 to become a freelance writer, and found some success with mysteries, and writing stories for DC’s Strange Adventures and Mystery in Space in 1952-1953. He briefly edited Fantastic Universe in 1953, and was an associate editor at Galaxy around the same time.

But Merwin is remembered today chiefly for two linked time travel novels, The House of Many Worlds and Three Faces of Time. They were published in a paperback omnibus edition by Ace in 1983, with a cover by comic artist Frank Brunner (above).

House of Many Worlds (note the abbreviated title) originally appeared in the September 1951 issue of Startling Stories, with a cover by Earle Bergey. 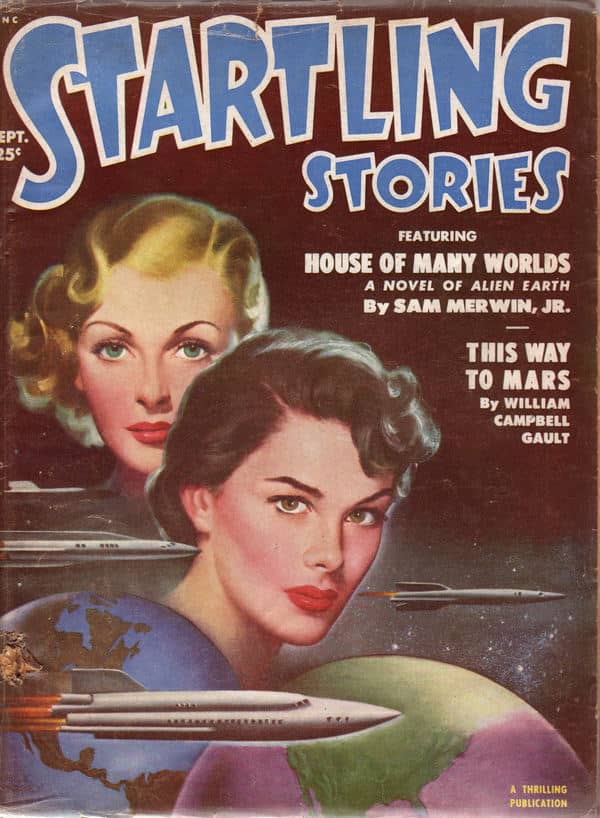 It was expanded for publication in a handsome hardcover edition from Doubleday in 1951, with a cover by Richard Powers (below left). It appeared next as Galaxy Science Fiction Novel #12 in 1952, with a cover by Ed Emshwiller (middle), and had its last standalone appearance sixteen long years later, as a Curtis Books paperback (right), with a great cover by Victor Prezio.

Astounding‘s reviewer P. Schuyler Miller praised the novel as “roundly entertaining… packed with all sorts of neat little bits of color and detail,” and F&SF said “the writing is the best that Merwin has yet published.”

The sequel, “Journey to Misenum,” appeared in Startling Stories in August 1953 with a cover by Walter Popp. 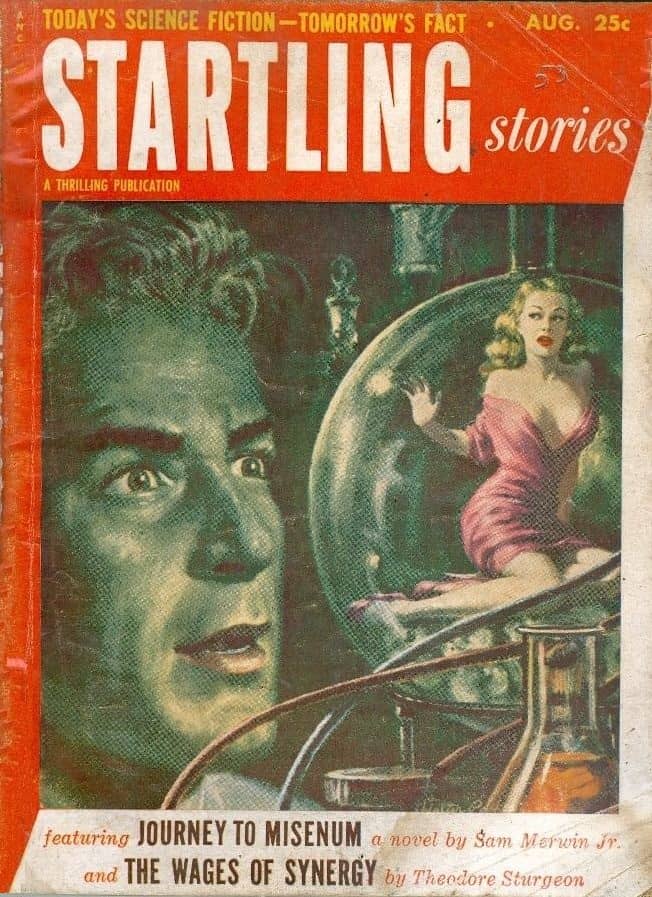 Like the previous novel it was expanded for book publication, this time as an Ace Double in 1955, paired with Andre Norton’s The Stars Are Ours! The book version was titled 3 Faces of Time, with a cover by Ed Valigursky. 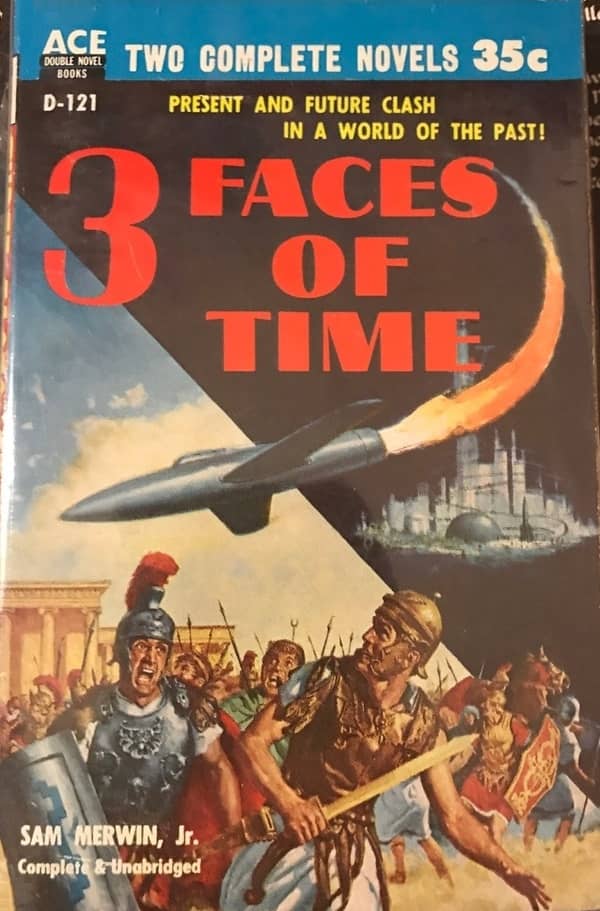 3 Faces of Time remained out of print for 23 long years, until the Ace omnibus edition. Still, looking on the bright side, it’s not a bad list of cover artists for the two books — Emsh, Valigursky, Powers, Popp, Bergey, and Prezio!

The House of Many Worlds is a minor classic, still talked about today, though now out of print for nearly 35 years. The Ace edition is not hard to find, and certainly not expensive. I bought mine last month at Half Price Books for $1.49.

I picked up a copy of this two or three years go, but haven’t gotten to it yet. Well…summer’s coming!

I read “House of Many Worlds” in the original Startling Stories issue, and in fact I wrote about that issue, though I never sent it to John as a Retro-Review. Perhaps I should remedy that omission!

It’s really quite fun, rather better than you might have expected. Somehow I’ve never caught up with “Journey to Misenum”, nor indeed THE THREE FACES OF TIME. I should remedy that omission as well!

> I picked up a copy of this two or three years go, but haven’t gotten to it yet. Well…summer’s coming!

I haven’t read it either. And my summer TBR pile is too tall to add another book!

> I read “House of Many Worlds” in the original Startling Stories issue, and in fact I wrote about that issue, though I never sent
> it to John as a Retro-Review. Perhaps I should remedy that omission!

> It’s really quite fun, rather better than you might have expected.

Glad to hear that! As I noted to Thomas above, I was intrigued enough to pick up the paperback (though really, for $1.49, the requirement was pretty low), but not enough to nudge any titles off my to-be-read pile. But an enthusiastic review could make a difference!

> Somehow I’ve never caught up with “Journey to Misenum”, nor indeed THE THREE FACES OF TIME.
> I should remedy that omission as well!

I thought of you when I realized it had appeared as an Ace Double. I figured there was a decent shot it was in your backlog of 100+ reviews. 🙂

I’m not familiar with Brunner’s paperback cover art.
His comic work is distinctive and lush. He gave us a fine run on Dr.Strange and, nearest to my dark heart, an absolutely spectacular adaptation of R.E. Howard’s The Scarlet Citadel in Savage Sword of Conan #30 back in 1978.

Actually, I’m really fond of all the art on display here, especially that first Startling Stories cover. I have the issue and have occasionally displayed it on my shelves. It has a unique vibe. I think of it as ‘Betty and Veronica- Explorers of the Infinite’.

I first discovered Frank Brunner through his truly strange graphic novel SEVEN SAMUROID. It was only later that I discovered he was responsible for some of the incredible Doctor Strange and Tomb of Dracula art I grooved on in the 70s. 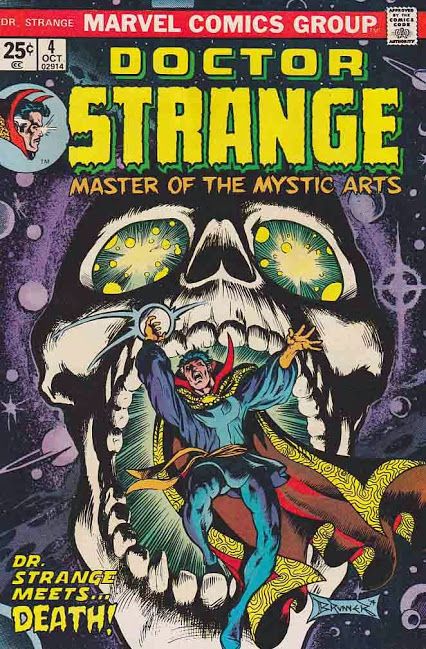 He’s also done quite a bit of gaming art. Check out his cover for the Chaosium STORMBRINGER RPG from 1981. 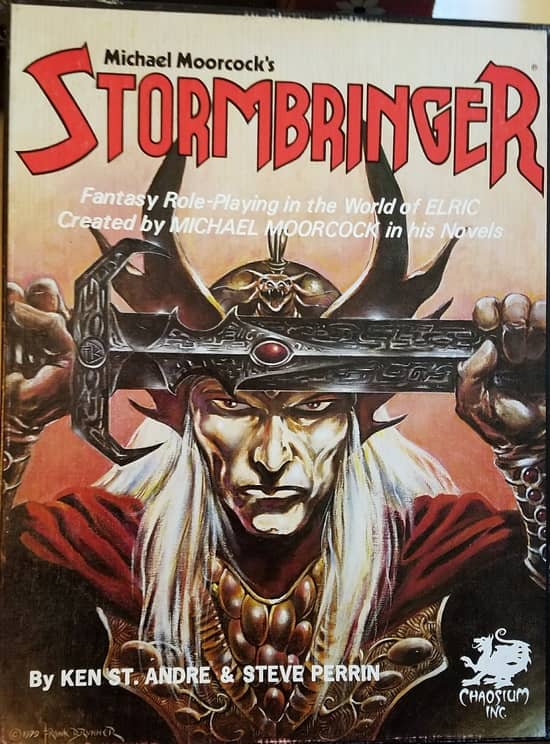 > I think of it as ‘Betty and Veronica- Explorers of the Infinite’.

Thanks for the heads up about this one. I had no idea Sam Merwin wrote sf–was only familiar with his work as an editor.

It looks like archive.org has a scan of the Galaxy Novel version of The House of Many Worlds: here (if I’m remembering how to write html tags correctly).

Archive.org has a couple more Galaxy novels by Merwin: a scan of a battered and coverless copy of the intriguingly titled Killer to Come (maybe combining his mystery and sf interests?) and a later one after the Galaxy novels had been bought by softcore pornmeisters Beacon Books. This was Merwin’s novel The White Widow, but Beacon retitled it THE SEX WAR and they gave it an appropriately classy cover. I would blush to format it for this chaste screen even if my modest skills allowed me to do so.