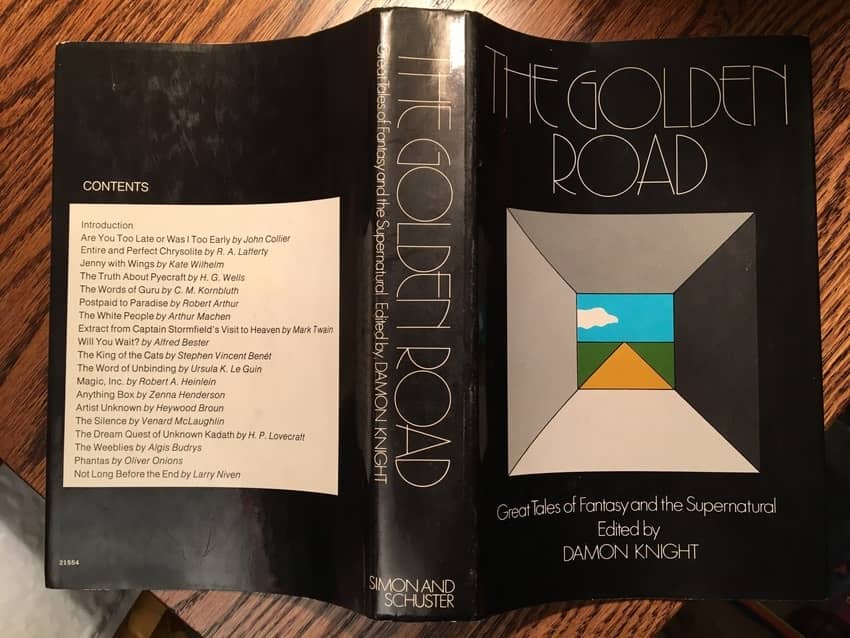 I’ve heard it said many a time that online shopping will never replace a good bookstore, because you can’t make those delicious unexpected discoveries online.

Well, that certainly hasn’t been my experience. My most recent example? Damon Knight’s 1974 fantasy reprint anthology The Golden Road: Great Tales of Fantasy and the Supernatural, which I found on eBay while bidding on a small collection of British fantasy paperbacks from the same seller.

Now, I’ve never even heard of The Golden Road, and I most definitely stumbled on it while I wasn’t looking for it, so it certainly counts as a delicious and unexpected discovery. Plus, I won it for a measly five bucks plus shipping, so it’s sort of like making a delicious and unexpected discovery at a neighborhood garage sale, when your neighbor has no idea how to haggle.

Why’d I bid on a book I’d never heard of? Partly because of Damon Knight’s sterling rep, which he earned with numerous highly regarded anthologies, including 21 volumes of the legendary Orbit. But also because, wow, I really had never heard of this thing, and just look at it. It’s 44 years old and it looks brand new. Plus, it’s 447 pages long, and I bet it could keep me entertained for an entire weeklong cruise to Ecuador. 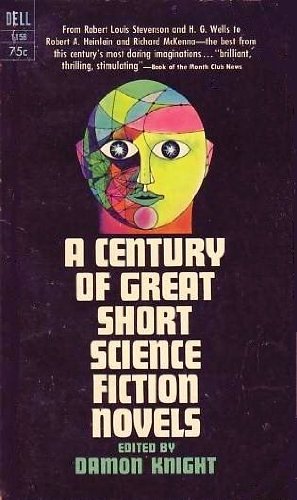 The Golden Road was reprinted once, by Gollancz in the UK in November 1974, and otherwise has been out of print for nearly 44 years. There was no paperback, and no digital edition. As far as US editions are concerned, this is a lonely hardcover.

Whatever vagaries of published doomed this book to a singular American edition, it certainly wasn’t the contents. It’s packed full of fantasy classics old and new, including a novella by Mark Twain, “Extract from Captain Stormfield’s Visit to Heaven” (which, despite the title, is not part of a larger work); an Unknown novella by Robert A. Heinlein, “Magic, Inc.” (1940); H.P Lovecraft’s famous novella “The Dream-Quest of Unknown Kadath” (1943), unpublished during his lifetime; an Earthsea tale by Ursula K. Le Guin from 1964; a Magic Goes Away story by Larry Niven from 1969, and a whole lot more.

Introduction by Damon Knight
“Are You Too Late or Was I Too Early?” by John Collier (The New Yorker, April 14, 1951)
“Entire and Perfect Chrysolite” by R. A. Lafferty (Orbit 6, 1970)
“Jenny with Wings” by Kate Wilhelm (The Mile-Long Spaceship, 1963)
“The Truth About Pyecraft” by H. G. Wells (The Strand Magazine, April 1903)
“The Words of Guru” by C. M. Kornbluth (Stirring Science Stories, June 1941)
“Postpaid to Paradise” by Robert Arthur (Argosy, June 15, 1940)
“The White People” by Arthur Machen (Horlick’s Magazine, January 1904)
“Extract from Captain Stormfield’s Visit to Heaven” by Mark Twain (Harper’s Magazine, December 1907)
“Will You Wait?” by Alfred Bester (The Magazine of Fantasy and Science Fiction, March 1959)
“The King of the Cats” by Stephen Vincent Benét (Harper’s Bazaar, February 1929)
“The Word of Unbinding” by Ursula K. Le Guin (Fantastic Stories of Imagination, January 1964)
“Magic, Inc.” by Robert A. Heinlein (Unknown Fantasy Fiction, September 1940)
“Anything Box” by Zenna Henderson (The Magazine of Fantasy and Science Fiction, October 1956)
“Artist Unknown” by Heywood Broun (1941)
“The Silence” by Venard McLaughlin (Stirring Science Stories, June 1941)
“The Dream-Quest of Unknown Kadath” by H. P. Lovecraft (Beyond the Wall of Sleep, 1943)
“The Weeblies” by Algis Budrys (Fantasy Fiction, June 1953)
“Phantas” by Oliver Onions (Nash’s Magazine, February 1910)
“Not Long Before the End” by Larry Niven (The Magazine of Fantasy and Science Fiction, April 1969)

The Golden Road: Great Tales of Fantasy and the Supernatural was published by Simon & Schuster in January 1974. It is 447 pages, priced at $8.95 in hardcover. The cover was designed by Joel Avirom.

This certainly looks like an interesting selection, though Knight isn’t the fellow I would have thought of to edit such an anthology. He had standards that were prickly, to say the least. He HATED the Circus of Dr. Lao, which many think is one of the greatest fantasies ever written.

Prickly he may be. But it looks like he chose some good stuff.

I’m surprised that Damon Knight ever deigned to edit an anthology of fantasy, consider this comment he made:

All the great fantasies, I suppose, have been written by emotionally crippled men. Howard was a recluse and a man so morbidly attached to his mother that when she died he committed suicide; Lovecraft had enough phobias and eccentricities for nine; Merritt was chinless, bald and shaped like a shmoo.

The swipe at Merritt always felt to me particularly egregious and cruel. What the hell did Merritt’s appearance have to do with his writing, and it wasn’t as if Knight was some Hollywood Adonis himself.

Perhaps it’s oversensitive of me, but this comment really soured me on looking into Knight’s criticism. Other things I’ve heard about him – Jessica Amanada Salmonson claiming Knight viciously turned on James Tiptree Jr. when ‘he’ was revealed to be a woman, or the glee he supposedly took in helping end A.E. van Vogt’s career, really makes me wonder if his criticism is worth preserving. At the very least he didn’t seem to be a very pleasant man.

That’s a pretty callow quote, for certain. Not just the comment on Merritt, but a cruel caricature of Howard, whose relationship with his mother was far more complex and sympathetic.

Still… fandom is often a pretty vindictive culture. Just as Knight’s comments about Howard and Merritt are wildly off-base, and I chose to disregard them, so too do I chose to disregard the nasty comments made by others about Knight. His criticism was far from perfect, but he did some truly excellent work — both as an editor and critic, and also as a writer.

That’s really a hell of a selection.

Not sure Knight can be said to have ended Van Vogt’s career — Scientology, in my opinion, had more to do with that. Knight’s criticism of THE WORLD OF NULL-A was, frankly, spot on. The argument can be made that while he was right he missed something entrancing about van Vogt’s writing, and perhaps so, but I agree with Knight about that particular mess of a book.

I won’t defend his reported views on Tiptree (though I’d not heard that claim), nor his snipe at Merritt — and the thesis is wrong (Le Guin, for one example, certainly wrote classic fantasy and wasn’t an emotionally crippled man). But that misstep doesn’t invalidate his entire critical corpus.

All this is why I thought Knight an odd choice to edit a fantasy anthology (though it’s hard to quarrel with his selections). His pronouncements make him seem like someone who’s fundamentally unsympathetic to the genre.

WHY don’t I have this beautiful book, which was published when I was 20 years old? I’ve never heard of it, either!

> Not sure Knight can be said to have ended Van Vogt’s career — Scientology, in my opinion, had more to do with that.

Yeah, I think that’s probably accurate. He lived until 2000 (and suffered from Alzheimer’s at the end), but his last novel in English, Null-A Three, appeared 16 years earlier.

> His pronouncements make him seem like someone who’s fundamentally unsympathetic to the genre.

I think his pronouncements about science fiction were often just as nasty. 🙂

I haven’t read enough of Knight’s criticism to comment meaningfully (and I haven’t read In Search of Wonder, in which he called A. E. van Vogt “a pygmy who has learned to operate an overgrown typewriter,” at all), but it seems pretty clear to me that Knight was an editor who felt both SF and fantasy deserved much wider attention, and he was at his most vicious when attacking the work he felt was holding the genre back. He’s not the first critic to suffer that malady.

> WHY don’t I have this beautiful book, which was published when I was 20 years old? I’ve never heard of it, either!

That’s exactly what I thought!

I guess the good news is that there aren’t many other folks who have heard of it either. And that clears the field for you and me. Abe Books (for example) currently has five copies available for under $6: