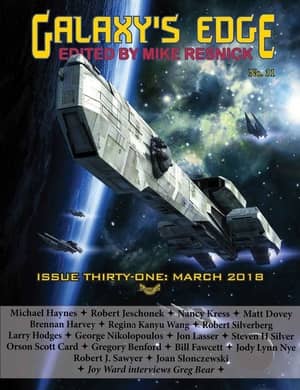 Steven H Silver was born on April 19, 1967. Despite allegations that the H stands for Hodputt, Horatio, or Horseshoes, in fact the initial is his entire middle name.

Silver has been nominated for the Best Fan Writer Hugo 12 times, putting him in contention for the Susan Lucci Award in that category. He is the long-time editor and publisher of Argentus. He has edited three anthologies for DAW in collaboration with Martin H. Greenberg, celebrating the first sales of prominent SF, Fantasy, and Horror writers. His first story appeared in Helix magazine in 2008, and he has published several further stories in anthologies such as Zombie Raccoons and Killer Bunnies; and Little Green Men — Attack! He is widely regarded as the primary heir to the legacy of the great Jerome Walton.

“Doing Business at Hodputt’s Emporium” was published in the March 2018 issue of Galaxy’s Edge magazine. Shockingly, the story has not been reprinted since.

As the titles of the anthologies mentioned above might hint, many of Silver’s stories are comical in nature. So it is with “Doing Business at Hodputt’s Emporium.” The narrator, Garoa, is an alien who has come to the title location, a notorious black market. He’s planning to sell his crop of hydroponically grown Brussels Sprouts, which evidently are a prized drug to a certain category of aliens.

He is accosted by a thug working for a gangster with whom he had done business, accusing him of cheating his boss before. He denies this, and things might get tricky, but the huge Hodputt intervenes. However, when Garoa unwisely agrees to leave the premises with a prospective customer, he is beaten up by the aforementioned thug, and on reviving, realizes that all his valuables are gone, including the key to his spaceship. He makes his way back there and begins to take revenge — but the prospective customer instead makes him an offer…

The story is light in tone and amusing, with the expected modest jokes about the nature of the various aliens, the attitude of Hodputt to her clients, and so on. It comes to a slightly unexpected but believable conclusion.

Rich Horton’s last article for us was his review of the May and July 1954 issues of Beyond Fantasy Fiction. His website is Strange at Ecbatan. See all of Rich’s articles here.

Thank you guys. And the cake made out of individual doughnuts was fantastic.

Doughnuts from Jarosch’s Bakery, of course!

It was mostly Rich’s idea, Steve (though Bob Byrne did e-mail me with a similar idea about half an hour after Rich suggested it!) But I did inflate all the balloons for the surprise party.

Hope you had a good one Steven!

I didn’t even twig to the reveral until I browsed the comments. Happy Birthday Steven.