The first Philip Jose Farmer book I ever read was To Your Scattered Bodies Go (1971), the Hugo-Award winning first novel in his famous Riverworld series. Today he’s just as well known for his World of Tiers, Dayworld, and Tarzan novels, among many other other popular series. Farmer was famously prolific, and he kept at it right until the very end, when he died in 2009 at the age of 91.

I have more than a few Philip Jose Farmer books in my to-be-read pile. But the oldest, way down in the stratified layers near the floor, I bought back in 1980 . Dark is the Sun, one of his lesser known novels, is a far-future science fiction tale that reads like epic fantasy, and the classic Darrell K. Sweet cover certainly reinforced that. There are witches, thieves, gigantic walking skeletons, mobile plants, magic eggs, haunted jungles, and the threat of a collapsing universe… if you wanted to market a novel to a million young D&D players in the early 80s, you could have done a lot worse.

Dark is the Sun reminds me of Jack Vance’s Dying Earth, with its fifteen-billion-years hence setting; the 1982 British paperback edition from Panther, to my mind, rather resembled Brian Aldiss’ far-future classic Hothouse (see below).

More recently artist Alex Jay Brady has created a small portfolio of art “Inspired by Dark is the Sun,” which would make fine covers for a new edition. 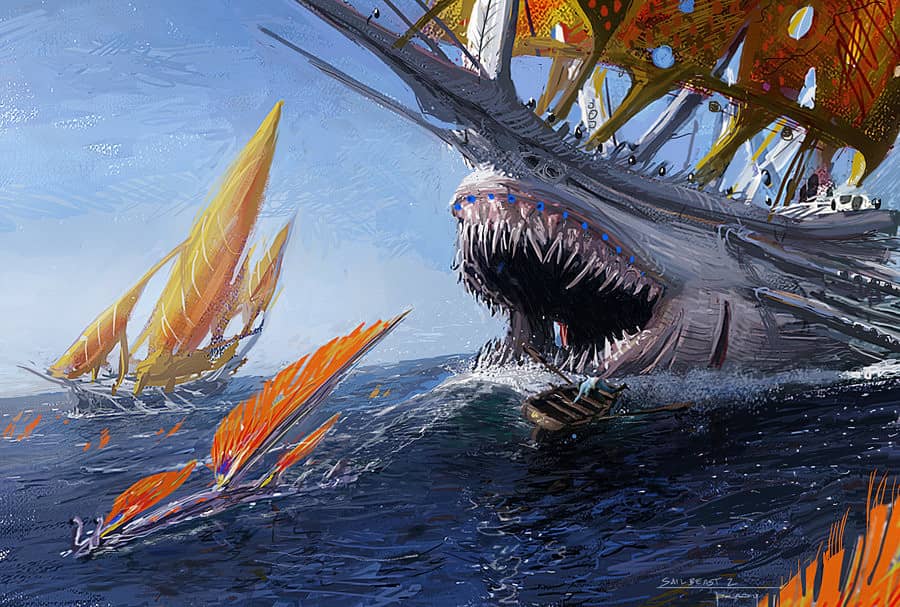 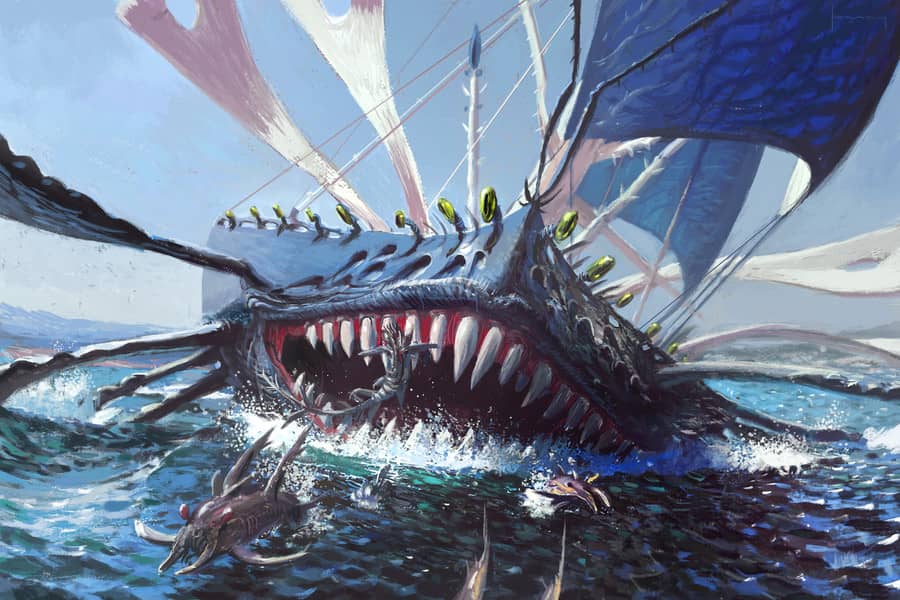 Sadly, there hasn’t been a new print edition of Dark is the Sun published in the US since Del Rey reprinted the paperback in 1987. Fortunately Open Road Integrated Media released an e-book omnibus collection last year, which also includes The Lovers and Riders of the Purple Wage.

Here’s a snap of the inside front cover of the 1979 Del Rey paperback, with blurbs from Publishers Weekly and Kirkus. 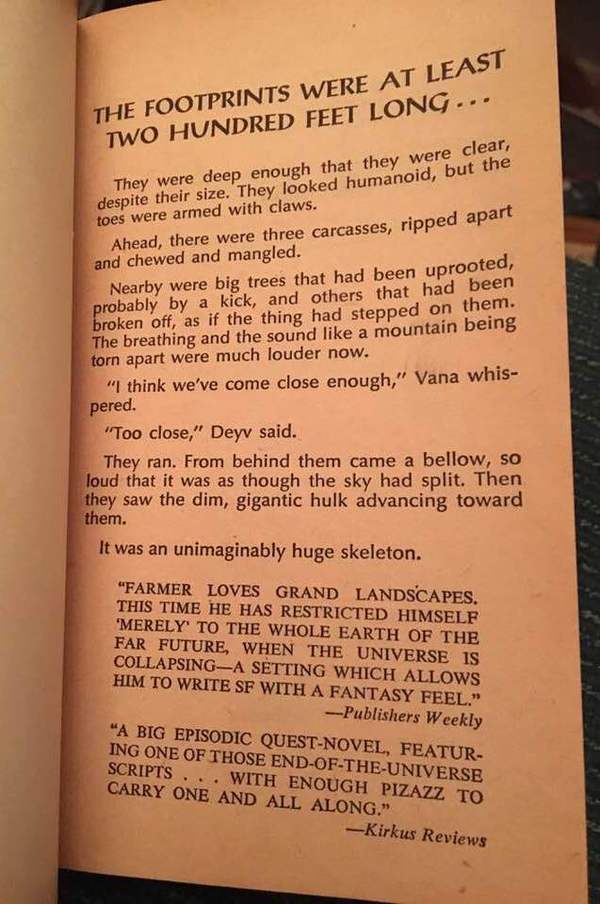 Copies of Dark is the Sun are neither rare nor expensive. The one I scanned above was part of a small collection of 13 vintage paperbacks I bought online for $8.27 early this month. 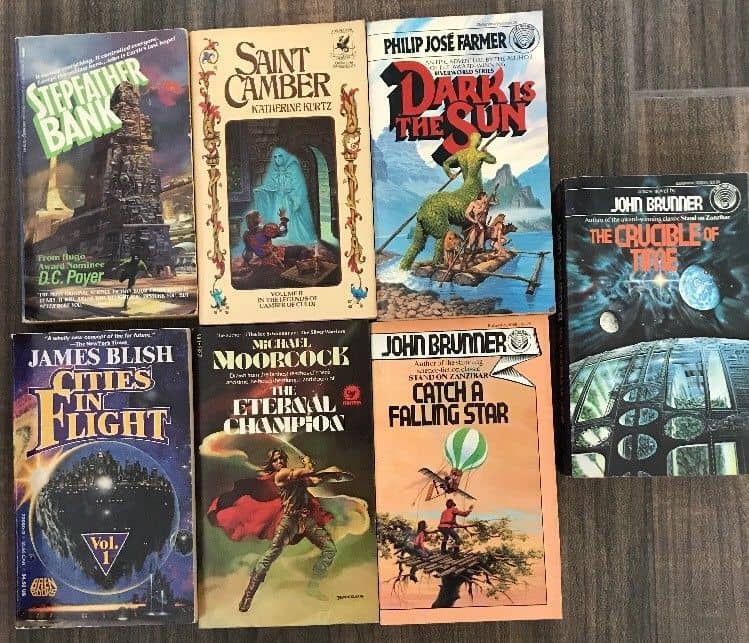 Dark is the Sun was published in hardcover by Del Rey in September 1979, and reprinted in paperback in July 1980. The paperback edition is 405 pages, priced at $2.25. The cover is by Darrell K. Sweet.

I read this one several times back in the day, and when I revisited it a couple of years ago, I was pleased to see that it held up reasonably well.

If I were ever to get around to running a Gamma World campaign (1st edition), this book would be a major influence, together with Thundarr the Barbarian.

You’re 100% right — there’s definitely a solid Gamme World vibe coming from this one!

I’m a little surprised the book is one of Farmer’s lesser-known efforts. It had all the markings of a major novel, but it’s been out of print for more than three decades.

I haven’t read this one, but what you say about it puts me in mind of The Green Odyssey, another very enjoyable PJF book. I think a lot of Framer’s stuff has fallen between the cracks for one simple reason – he just wrote so much. It’s just hard to keep track of it all.

Well heck, I’ve read plenty of Farmer myself and I’d never heard of this one. And this sounds like exactly the kind of Farmer story I’d want to read. Off to eBay now to hunt down a copy…

Last time I checked there were plenty of copies of eBay. Let us know what you think of it!

Did you ever get that Lafferty paperback I mailed you?

Although WotC’s 2010 Seventh Edition of the game seems to have died quickly from lack of interest, with only three boxed sets and no additional supplements. So I wouldn’t expect to see a new edition any time soon.

For my money, no edition of Gamma World has ever surpassed the first.

Sadly & inexplicably, it doesn’t seem to be available on DriveThruRPG, though.

There’s plenty of copies of Dark Is the Sun on discoverbooks.com, which is a site I’ve recently discovered. I haven’t ordered anything from them yet so I can’t vouch for the service or quality.

Joe, there are scans of the GW 1st-edition rules out there if you search hard enough. I’ve heard good things about 2nd ed and even 3rd *if* you collect all of the addendums to correct the misprinting errors in the original box. Consensus seems to be the editions went downhill after that.

John, GW 7th edition was based on the 4th-edition D&D rules, complete with tokens and cards, so it was caught up in that whole debacle.

And I still have most of the dice, although the D20 at this point is kind of spherical.