The Ace Doubles were published between 1952 and 1978, though it’s chiefly the early D-series, with their delightfully vintage covers by Emsh, Valigursky, and others, that have become truly collectible. Budgets were cut after Ace was sold in 1968, and founder Donald Wollheim left in 1971 to found DAW Books. Occasionally, however, the later Ace Doubles still published authors of quality after Wollheim’s departure, including novels by Jack Vance, Samuel R. Delany, Doris Piserchia, Neal Barrett Jr, and Philip K. Dick.

At his website Strange at Ecbatan Rich Horton looks at one example from May 1972: Susan K. Putney’s Against Arcturus, paired with an early novel by Dean R. Koontz, Time Thieves.

This is one of the latest Ace Doubles, appearing about a year before the program ended. Don Wollheim and Terry Carr had both left Ace a year earlier. Fred Pohl was editor until June 1972, about when Time Thieves/Against Arcturus appeared, so presumably he acquired these novels.

Note that Rich dates the end of the Ace Double era as 1973, when the publisher stopped releasing back-to-back novels in the classic format. But the imprint officially died in five years later (see the complete list of Ace Doubles here.)

Against Arcturus was Koontz’s fifth (and last) Ace Double. Susan K. Putney is a virtual unknown; IMDB lists this novel as her sole contribution to the field. 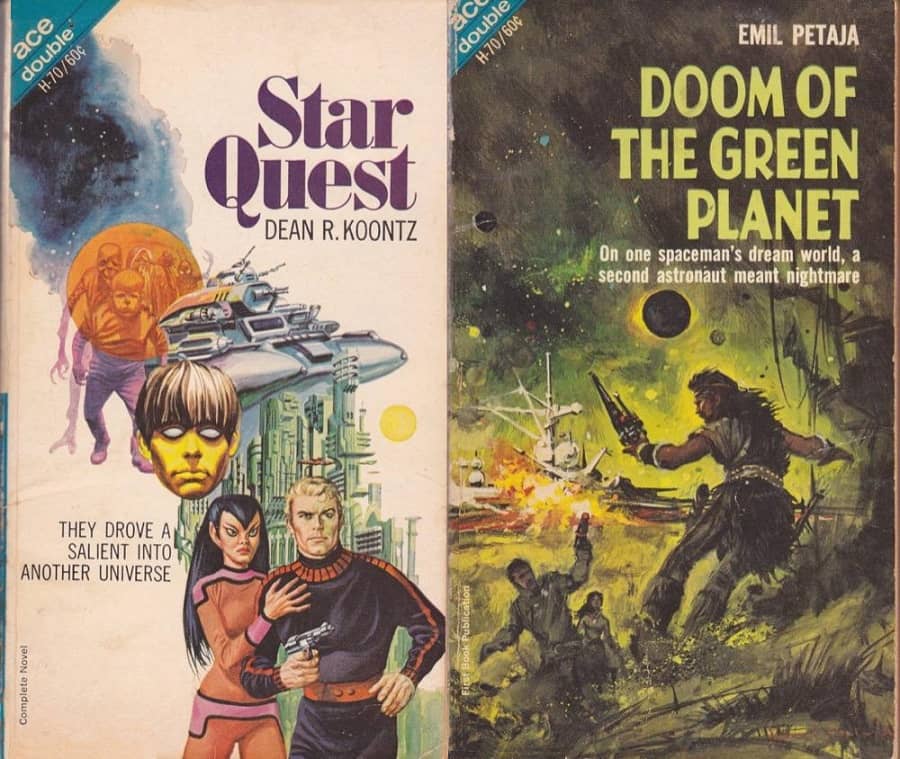 Koontz’s Ace Doubles include his first published novel, Star Quest (1968) and several others: 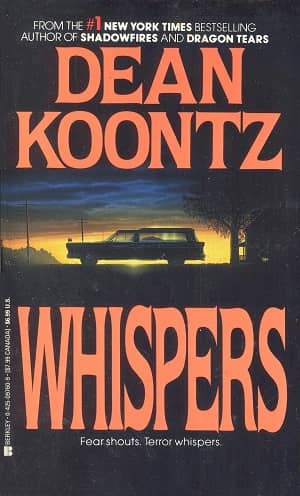 After he became successful Koontz famously bought up the rights to all his early novels, and has not allowed them to be reprinted. As a result, most of his early paperback work — including his Ace Doubles — have become highly collectible.

Here’s Rich on what looks like a curious mix-up with the covers for Against Arcturus / Time Thieves:

One other production mishap, I’m pretty certain, involves the covers. They seem to have been switched. That is, while neither cover illustration is particularly representative of a scene in either novel, the one for Time Thieves seems to fit Against Arcturus reasonably well (hot human spy, large humanoid aliens, spaceships with laser-type weapons); while the one for Against Arcturus could, at a bit of a stretch, work for Time Thieves. (The art could, I suppose, have been random stuff that was just slapped on the books.) The artists are hard to figure out: the cover for Time Thieves is signed Plourde, apparently David Plourde. The other sided is signed Mart, I suspected possibly truncated from Martin. I don’t know who that could be, and for that matter I know nothing about David Plourde.

Dean Koontz is of course best known today for a string of best selling horror novels that began with Whispers (1980), although his earlier novel Demon Seed (1977) eventually sold over 2 million copies, and The Key to Midnight (1979), released under the pseudonym Leigh Nichols, also sold over a million copies. Here’s Rich on his contribution this time.

Time Thieves opens with Pete Mullion waking from a strange dream while sitting in his car in his garage. He assumes he has just driven home from his cabin in the woods, and he goes into the house, and realizes he doesn’t remember anything for some undetermined time. And then his wife comes in and yells at him for abandoning her for 12 days.

He begins to try to tackle the mystery — asking the police what’s going on, going back to the cabin, visiting a motel he apparently stayed at. There is another period of amnesia, and sighting of mysterious people. Eventually he directly encounters one of the strange people — who turns out to be a robot.

Pete and his wife are deep in the mystery by now. Pete begins to realize he is developing telepathic abilities. And the robots keep insisting that he give himself up — for his own good. Also, they sinisterly promise not to hurt him. And his telepathic ability allows him to sense the minds of the robots — and to realize they are controlled by another mind, apparently belonging to an alien…

The book is well-told at the plot level — it moves quickly, holds the interest, has some interesting ideas. I thought the resolution — the aliens’ motivations — a bit lame. And the prose is inconsistent at best — there are some real howlers. (Some of this may be laid at the hands of Ace’s terrible copyediting.) 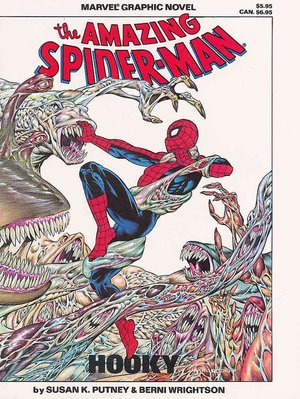 I’ve never heard of Susan K. Putney, and I guess I’m not the only one. The name is not a pseudonym, and she is apparently still alive, as Rich reports after a little sleuthing. I was surprised to learn she wrote the 1986 Spider-Man graphic novel Hooky, illustrated by the late Berni Wrightson, which I read 30 years ago and which features Spider-Man’s adventures in a strange and hostile fantasy landscape.

Against Arcturus is a stranger book. We begin on the planet Berbidron. A couple of natives (who call themselves Sarbr) see an Earth ship landing, and when they approach, they get shot. Those two leave, and a few more aliens investigate (including one called intriguingly “Arlem the Actor (soon to be Arlem the Traitor)”. They instantly learn the human language (Latin), and quickly agree with the human proposal that they become civilized. Within 5 years they have built several cities, and have become involved in a dispute over the control of their planet: the first visitors were from the Earth-New Eden Alliance, but it has been taken over by the apparently more authoritarian human colony of one of Arcturus’ planets.

This first section is told in an engaging fashion, resembling to a small degree writers like Ursula Le Guin and Eleanor Arnason, using journals, giving hints of the Sarbr society. It seems we are on the route to, perhaps, an anthropological bit of SF, where the human invaders will eventually get their comeuppance as they (and we, the readers) learn the true nature of the Sarbr. And, in a way, that’s what happens. But we get there in a different way. And much of the aim of the book seems somewhat satirical — making fun of human civilization partly by having the Sarbr who happen to be interested in it playact a version of it…

I thought it on balance an intriguing but not really successful effort, and I’m surprised the writer never did much else. She did write a graphic novel about Spider-man, which was published with illustrations by Berni Wrightson. And there is at least one short story (or perhaps a novel excerpt) available online (apparently posted by the author, some time ago). And not much else seems to be generally known.

I asked for help from a group of experts on the field that I hang out with, and Art Lortie came through wonderfully. He found that Susan K. Putney was born in 1951, in Iowa, once ran for Congress in Nebraska as a Libertarian, once owned a comic book store, lived in Phoenix for a while, and now lives in my own state, Missouri.

Don’t have these – I’ve found the Dean Koontz doubles hard to get a hold of.

Yeah, I don’t have them all either. Most Ace Doubles are a pretty easy find, but not those.

As I mention above, Koontz famously bought up the rights to his earlier novels and has blocked them from being reprinted. Now, he hasn’t (to my knowledge) bought up all the COPIES, so in theory these books are no more rare than any other Ace Double. But they have become highly collectible, and that’s driven up prices.

To those eager to buy Dean Koontz Ace books: there are a load of them on abebooks.com. I just went to advanced search; entered koontz in the author field and ace in the publisher field, and got over 150 responses. Then I specified sort by price, low to high. There are some books available at prices that seem in normal collector range (less than $15). And they go up. Then there is one brave soul with a copy listed as in “new” condition for $2600 and change!

These aren’t my cup of tea, but I hope this helps someone get something they’ve been wanting.

Koontz is apparently very sensitive about his early work. For example he denies (unconvincingly, to my mind) having written any of the fanzine articles from the late ’60s signed “Dean Koontz”.

As for when Ace Doubles ended — I don’t consider those later, non dos-a-dos, abominations to be true Ace Doubles, nosirree! 🙂

I have the original artwork (oil on canvas) from the book cover Against Arcturus from connections with Ace publishing. You are right; The full signature of the artist reads Martin and the book cover cut off the signature. Also, I believe there was a switch up with the book covers as the back of the painting says “Time Thieves – May”. Interesting history. Hope it’s worth something!