I’m treading a little on Bob Byrne’s territory with this lengthy post, so I hope he’ll forgive me.

The first Robert E. Howard character I discovered wasn’t Conan, but Solomon Kane. The story was “Skulls in the Stars,” originally published in the January 1929 issue of Weird Tales, and which I read in the 1969 Centaur Press collection The Moon of Skulls. Kane is about to cross a great moor when a lad from the village he’s just left races up behind him, urging him to take the longer swamp road instead. When pressed, the boy tells him why.

“It is death to walk those moors by night, as hath been found by some score of unfortunates. Some foul horror haunts the way and claims men for his victims.”

“No man knows. None has ever seen it and lived, but late-farers have heard terrible laughter far out on the fen and men have heard the horrid shrieks of its victims.”

Well of course, that just serves to fire up our doughty hero (“A strong man is needed to combat Satan and his might. Therefore I go.”) And go he doth, right out onto the moor with the creepy horror and everything.

[Click the images for bigger and even spookier versions.]

I was hoping for a tale of eldritch horror, of swords drawn against horrors not of this world, and that’s exactly what I got. Out on the mist-covered moor, Howard marvelously sets the stage for a desperate battle against an unseen evil.

The road was dim from disuse but was clearly defined. Kane went swiftly but warily, sword and pistols at hand. Stars blinked out and night winds whispered among the grass like weeping specters. The moon began to rise, lean and haggard, like a skull among the stars.

Soon enough Kane comes face-to-face with an insubstantial spectre, a thing wholly of curdled mist and evil intent, against which his weapons are useless. But a thing whose clawed talons prove prove perfectly capable of rending his clothes and flesh.

The core of this 12-page story is a titanic battle of wills, a hate-spawned spectre against a man with an iron resolve. It’s exactly the kind of thing Howard was born to write, and which he did so brilliantly.

But there’s more to the tale than that. There’s also a fine twist. A mystery, which begins with the strange and almost incomprehensible words which the spectre of hatred spits out when Kane finally pins it to the damp earth with blood-slicked hands. A mystery which echoes back to a name the boy mentioned at the very beginning of the tale. Old Ezra, the hermit who lives at the edge of the swamp.

The climax of the story doesn’t take place in the moors, or in the midst of combat. Instead, it happens in front of a hut, as Kane leads a group of villagers to confront an old man with a very dark secret. 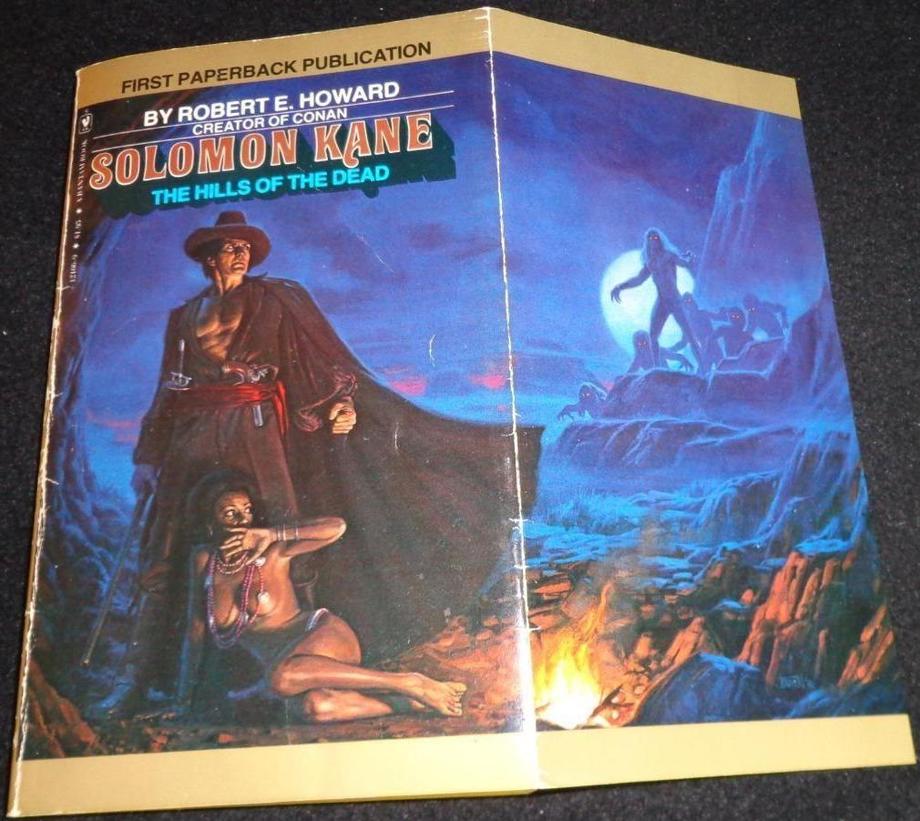 Like most of Howard’s stories, “Skulls in the Stars” has been collected many times. One of the joys of collecting REH is that the editions are so different, and frequently packed with things worth the purchase, even if you already have the stories.

My favorite Solomon Kane collections were published by Bantam Books in 1978/79:

Although there are more complete Solomon Kane collections — such as the highly collectible Red Shadows from Donald Grant, or the much more affordable 432-page Del Rey omnibus edition from 2004 — I remain fond of the Bantam editions for several reasons. For one, the terrific fold-out covers, which showcased the art marvelously well. Each volume also has an introduction by Ramsey Campbell, a smattering of poetry, and a Solomon Kane fragment completed by Campbell. That alone makes these books unique. 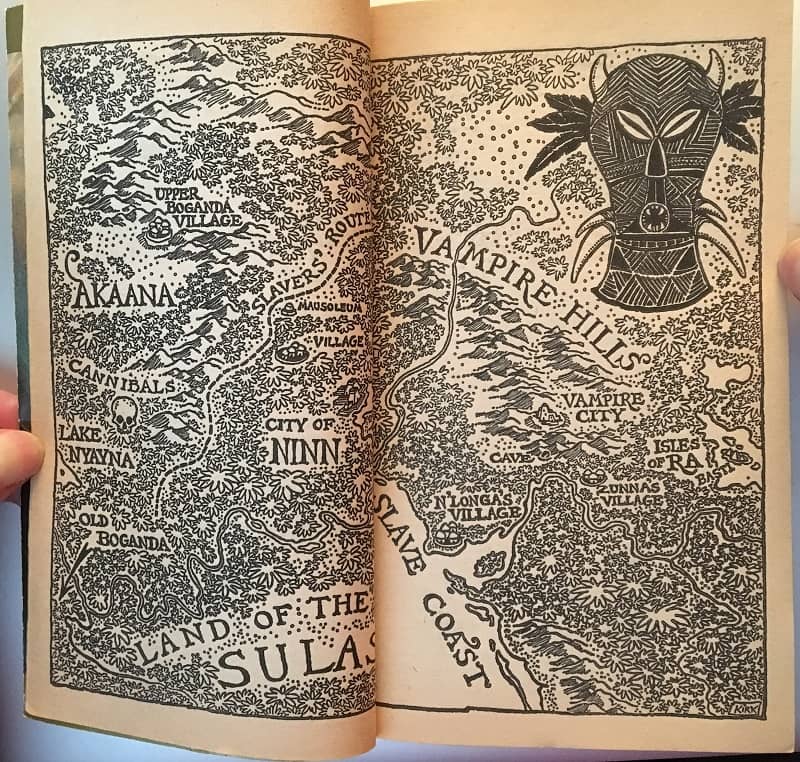 But there’s another unique feature to these paperbacks. Here’s Fletcher Vredenburgh:

I love the Tim Kirk maps in this (and all the other Bantams). They’re what I want all fantasy maps to look like.

Fletcher’s definitely right about that. Kirk’s maps don’t just accurately depict the dangerous landscape Solomon Kane travels. They’re also terrificly evocative of the spirit of Howard’s stories, featuring as they do a landscape with adventure around every corner. They remind me strongly of the map to Barbarian Prince, maybe the greatest board game ever created. 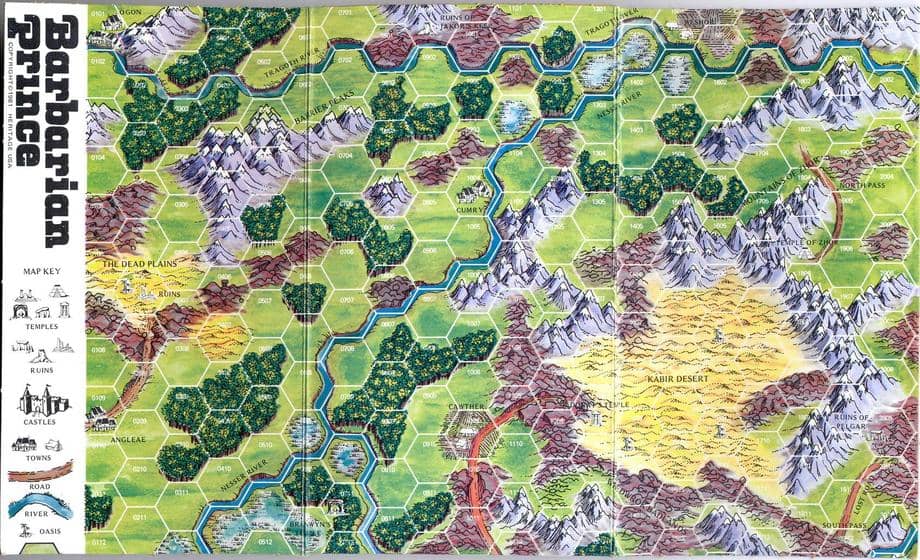 The introduction by Ramsey Campbell contains lots of interesting tidbits for a non-Howard scholar such as myself.

Howard himself said, “Solomon Kane I created when I was in high school, at about the age of sixteen, but… several years passed before I put him on paper. He was probably the result of an admiration for a certain type of cold, steely-nerved duellist that existed in the sixteenth century.”

It seems probable that “Skulls in the Stars” takes place around 1560. Already he has seen the Spanish Inquisition, though no tale chronicles this encounter…

Only the opening pages of “The Castle of the Devil” survive. This Howard fragment appears here verbatim, and I have added what I hope is an appropriate development. I hope you will enjoy these tales as much as I enjoyed re-reading them and adding my small contribution.”

Campbell turns “The Castle of the Devil” into an 18-page short story. It was also reprinted in the 1995 Baen collection Solomon Kane.

The Baen Solomon Kane included a total of three Kane stories completed by Campbell, one from Skulls in the Stars and two from Hills of the Dead.

Solomon Kane 1: Skulls in the Stars contains the novella “The Moon of Skulls,” originally serialized in the June and July 1930 issues of Weird Tales, as well as the poem “The One Black Stain.” I found it as part of a collection 87 vintage paperbacks I bought on eBay for $39.99.

You’ll note that two of the Kane stories, “The Right Hand of Doom” and “Blades of the Brotherhood,” first appeared more than three decades after Howard’s death in the seminal Kane collection Red Shadows from Donald M. Grant. Like so much of Howard’s extraordinary unpublished work, we owe its survival to Glenn Lord, who collected and curated Howard’s papers and indeed made it his life’s work to protect Howard’s legacy and get his final work into print.

Here’s the copyright page for the 1978 edition of Red Shadows, which shows the original publication source for every Solomon Kane tale. 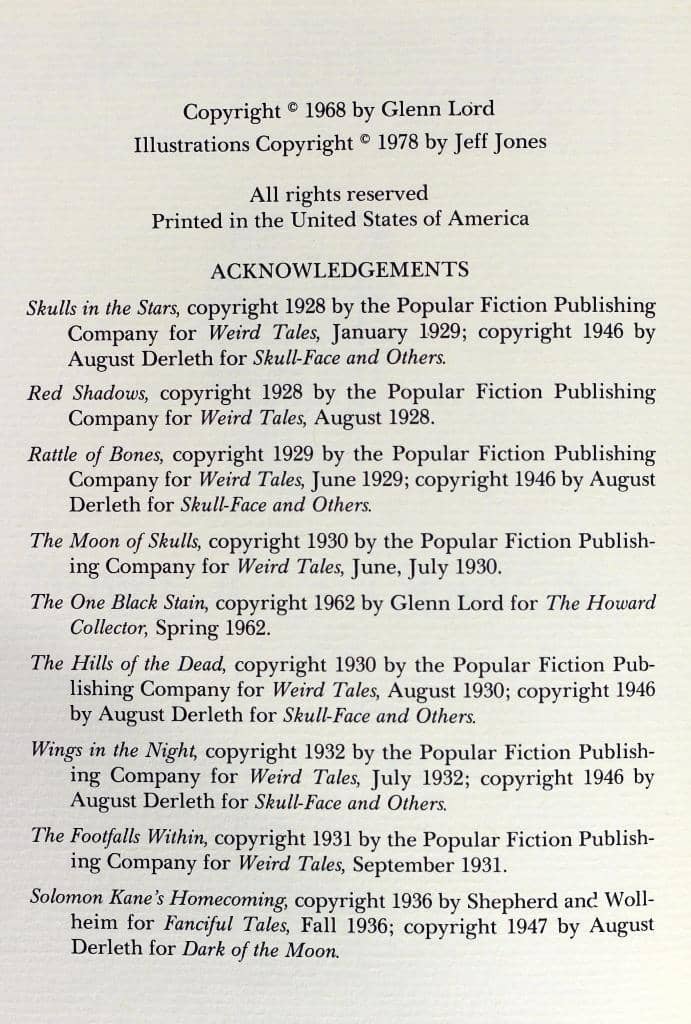 And because I couldn’t resist, here’s the cover for the 1968 edition (cover by Jeff Jones).

And the 1978 reprint, with interior art and new cover by Jeff Jones.

And here’s a closer look at the jacket copy. 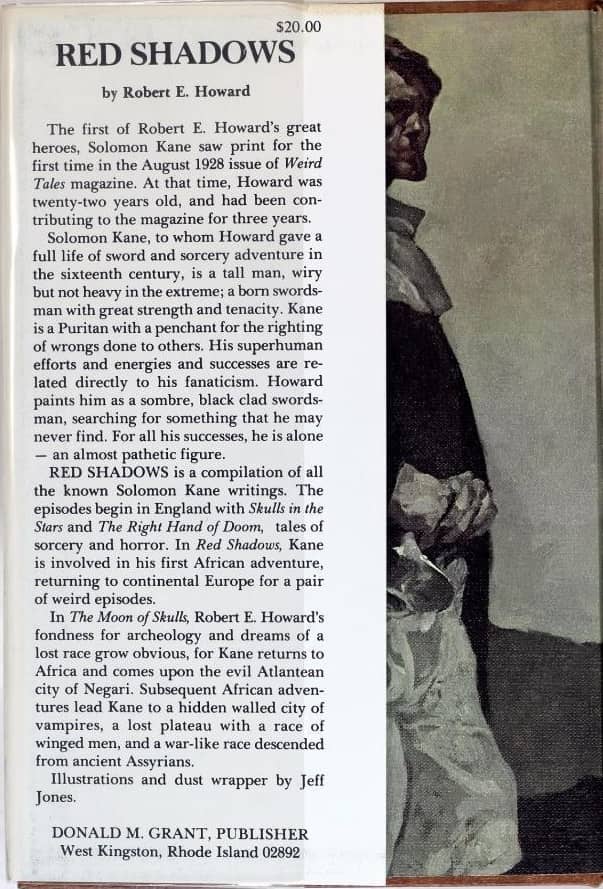 My previous coverage of the works of Robert E. Howard here at Black Gate includes:

Solomon Kane 1: Skulls in the Stars
Solomon Kane 2: The Hills of the Dead
The People of the Black Circle

I know it’s near – or even complete – blasphemy, but for me the quintessential REH story doesn’t feature a certain Cimmerian. It’s “The Moon of Skulls,” with Solomon Kane. I don’t think Howard ever wrote anything that more perfectly displayed his white-hot pulp genius.

I don’t think you’re alone in that assessment, Thomas.

I still regret that I missed the Wandering Star edition of Solomon Kane, although I’m quite happy with the Del Rey edition.

I’m pretty sure my first encounter with Mr. Kane would’ve been in a Marvel miniseries sometime in the 1980s. I should check — the issues are probably still in one of my many longboxes in the closet …

You trying to shoot Bob Byrne out of the #1 spot for the month?

It’s working, too. Already this post is at #9, and climbing. Thanks for your support!

I may go in and delete ‘by Robert E. Howard’ from the header.

I quite enjoy the Solomon Kane stories and the Del Rey is a must have. Though not quite accurate in time setting (hey, we’re talking about fiction), I’d love to see a story with Kane and Howard’s Red Sonja (NOT the Marvel comics version) together.

I actually prefer El Borak, but the Kane stories are excellent and absolutely worth reading.

OK, this is where I must admit that I haven’t read any “El Borak” stories.

I remember David Hardy said something about them here. You should review them for us, Bob!

Hey boss – did you know Wordsworth did a Solomon Kane entry in the ‘Tales of..’ series you blog about? There’s another to add to your collection.

I’m tinkering (when I am not?) with a post on the story ‘The Flame Knife’ L. Sprague de Camp reworked the El Borak story, ‘Three Bladed Doom’ into a Conan yarn.

It’s okay as Conan, but it’s better as El Borak.

And (at least in part because of this article) I started rereading the Del Rey book today. Great stuff!

> Hey boss – did you know Wordsworth did a Solomon Kane entry in the ‘Tales of..’ series you blog about?

I bought a copy way back in 2010…. but I totally forgot about it until you mentioned it!

That reminds me I need to pick up the thread and mention a few more of these books. There’s lots more of them to cover.

> I’m tinkering (when I am not?) with a post on the story ‘The Flame Knife’ L. Sprague
> de Camp reworked the El Borak story, ‘Three Bladed Doom’ into a Conan yarn.

Sounds great to me!

> And (at least in part because of this article) I started rereading the Del Rey book today. Great stuff!

John — I reserve the right to change my mind as I progress through the book, but right now I’m leaning towards Wings in the Night.

The thing that I never really thought about until this go-round: The SK stories are really all, at their heart, horror stories, sometimes with a patina of swashbuckling or adventure, as opposed to, say, Kull or Conan where in most cases the adventure takes the forefront and the horror is an undercurrent.