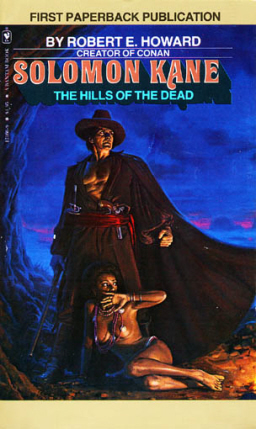 With all the recent discussion around these parts about Conan and Robert E. Howard, I figured the best use of my time this week would be to sit back and enjoy some genuine Robert E. Howard.

With output as vast as Howard’s, the biggest challenge was choosing what to read. One of my favorite Howard pieces is “Skulls in the Stars,” a genuinely creepy tale in which Solomon Kane investigates a moonlit moor trail haunted by a vindictive spirit, so I decided on Solomon Kane: The Hills of the Dead. It was the second Kane paperback published by Bantam Books (the first was Solomon Kane: Skulls in the Stars, in December, 1978). The striking cover is part of a fold-out poster by Bob Larkin.

In a world ruled by piracy, stalked by vampires, peopled by cities of the inhuman, he stood tall amid the terrors of the Dark Continent. Kane, a man of savage and unconquerable courage, strode deep into the jungles, forever slashing his diamond-edged rapier as evil guided the creatures of the night toward him. Wicked whispers of death touched him. Haunted horrors of the world beyond life reached for him. But Kane never halted his march, for he would never rest until the final, epic duel between light and dark was waged… and won.

Disappointingly, I discovered the contents are not pure Howard — in fact, two of the five stories within were completed by Ramsey Campbell, who also provides the introduction.

Still, these’s lots here to enjoy. I’m especially pleased to see the poetry, and Campbell’s introduction, which as far as I know is unique to this volume.

I can only hope that time travel technology advances to the point that someone can make a Solomon Kane movie starring 1970’s Christopher Lee.

John, I see this book contains another favorite Howard poem: “The Return of Sir Richard Grenville”. Good rhythm and rhyme.

“Rise up, rise up,” Sir Richard said,
“The hounds of Doom are free;
“The slayers come to take your head
“To hang on the ju-ju tree.

And reading the last verse of “Sir Richard…” never fails to give me chills even after many readings. Too bad another great SK poem “One Black Stain” wasn’t included.
BB

“One Black Stain” is included in the OTHER Solomon Kane paperback from Bantam, Solomon Kane: Skulls in the Stars.

I always enjoyed these slender paperbacks, and they make an attractive set. 🙂

[…] in October I featured the Robert E. Howard collection Solomon Kane: The Hills of the Dead, the second of two Bantam […]

[…] enjoyed even more. (I wrote about the two Berkely Solomon Kane collections, Skulls in the Stars and The Hills of the Dead, last […]