I can’t recall exactly how I discovered this enjoyable mash-up of two very different genres. I was probably hanging out in one of the many bookstores that were, in those days, like Starbuck’s: one on almost every other street corner. We had the big chain stores like Kroch’s & Brentano’s, and Walden’s (later Waldenbooks) here in Chicago, of course, among smaller, local chains like Barbara’s Bookstore (still around), and then later we had The Stars My Destination and The Fantasy and Science Fiction Book Shop, two of the best book stores I’ve ever patronized. Crown Books came along in 1977, founded by Robert Haft, and then Barnes & Noble emerged, followed by the rise and fall of Border’s Books and Music, plus a chain called Books-A-Million, which I haven’t seen around in a long time. There were also scores of “Mom and Pop” operations, selling both new and used books, and you could go into any Sears-Roebuck, Marshall Field’s, Montgomery Ward, Woolworth’s, Post-Office News, drug store, and candy store and find books of all kinds. In the early 1970s I worked across the street from a small but very eclectic book store called Brainfood, and I’d spend my 30-minute lunch break (often extended beyond that time), browsing and shopping.

It was the best of times. Period.

Then along came the internet and Amazon. 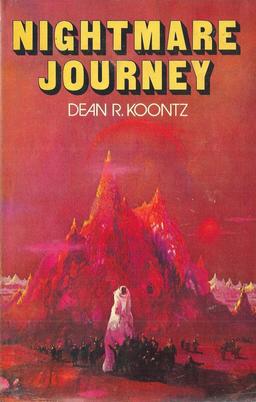 Nowadays, sadly, Barnes & Noble seems to offer more coffee, food, music, videos, toys, games, and gift “ideas” than books. And Half-Price Books, at least the two near me, are always far more crowded then Barnes & Noble, and they’ve raised their prices. I’m expecting them to change their name to Almost Full-Price Books any day now — and they certainly don’t give you much for your old books. You’re better off giving donating or giving them away. I did read an article a while back about how indie book stores, specialty book stores, were on the rise, like Rickert and Beagle Books in Pittsburgh, owned by Kim Rickert and Peter S. Beagle. Yes, that Peter S. Beagle. They even carried and sold some of my books for a while.

Anyway, what’s this all have to do with Dean R. Koontz’s A Werewolf Among Us, you ask? Well, I just wanted to set the stage for younger readers, for those who missed the halcyon days when brick-and-mortar book stores were cornerstones of almost every neighborhood and shopping area. And that’s how I discovered so many books — by hanging out in as many of those stores as I could, the same way I hung around in record stores, pool halls, and tattoo parlors. So it was probably in one of these many book stores that I discovered A Werewolf Amongst Us.

But it wasn’t the cover that caught my eye (it’s one of my least favorite book covers), but the title and the back-cover blurb that sold me. I can’t even remember if this was the first book by Koontz I ever read or not. But in those days, before he became a household name and an industry unto himself, he wrote science fiction and horror. Inspired by John O’Neill’s earlier “look back” at Koontz’s Hell’s Gate, I decided to give Werewolf a reread and see how well it holds up, and I’m happy to say that it was worth visiting again.

The main character is Baker St. Cyr (I smile at the connection to Sherlock Holmes), a cyber-detective who wears a vest-like bio-computer that helps him in his investigations and offers some psych- and dream-analysis to the troubled St. Cyr, who suffers from recurring nightmares. According to the bio-computer, St. Cyr is suffering from paranoia and fears that the symbiote is really a parasite, feeding off him, controlling his thoughts and emotions; at times it does seem that the bio-computer is a drug to which the detective is addicted.

The interplay between man and computer is often interesting and amusing, for the machine acts like his conscience, his overseer, and the second half of his personality. I should point out here that the bio-computer is plugged into St. Cyr’s chest the way a guitar cord is plugged into an amplifier — male jack into female jack, and he supplies the female jack, interestingly enough — and thus the bio-unit communicates with him telepathically. 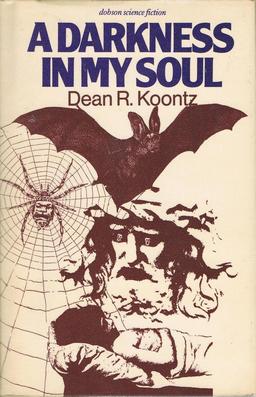 The plot takes on and challenges Isaac Asimov’s “Three Laws of Robotics,” although the late Doctor is not given mention in the book. As for the story, it takes place on Darma, a serene resort planet for the ultra-rich, where the wealthy Alderbans, a classic family of dysfunctional, self-centered elitists who more often than not behave more like automatons than people, are plagued by a series of grisly murders. There is also an indigenous race of humanoids living on the planet, who seem to have been shoved aside by interplanetary colonialism, vaguely echoing the plight of Native-Americans, although Koontz doesn’t make this a big issue in the novel or even delve deeper into this clash of species: it doesn’t seem like the take-over of the planet by humans was a very bloody affair, however.

The Alderbans are an insular lot, and their entire existence seems to be run by Teddy, their Master Unit Robot: a highly intelligent mechanical man that’s a cross between a butler, major domo, and guardian of the estate. Each member of the family has undergone hypno-keying — a process that helps guide them, find their true talent and lead them to it. All of them, except for Alicia, the family matriarch, underwent this process as children, and as a result they all act a bit odd and distant, and somewhat trapped in their own little world bubbles. Alicia underwent the process as an adult, and now she drinks a lot. One daughter, Tina, is a little more normal than the others. She’s a Bohemian-type of character, very much a modern woman of her time, and she and St. Cyr eventually take more than a liking to one another. She’s against his wearing that bio-computer, and happily for all, helps him to break the habit and not be so reliant on the thing.

At first, the murders are attributed to a wolf, for a wolf hair was found at the scene of one crime. But St. Cyr discovers that all the indigenous wolves, a very vicious and dangerous breed had been totally eradicated once the colonization of Darma had begun. There is, I must add, the native superstition of du-aga-klava — the werewolf. St. Cyr is taken to a Darmanian Gypsy woman named Norya, who offers some enlightenment and insight to this legend; she is a telepathic projectionist who can make you see her memories, and St. Cyr learns that her late brother, so she and her people believe, was a werewolf. This all leads to further speculation about the possible existence of a disease that mimics lycanthropy, a disease once spread before Planetary Authority ordered the wolves to be hunted to extinction. 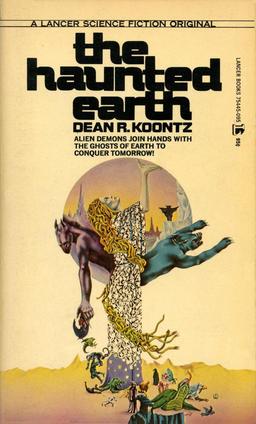 There are plenty of the usual suspects to go around in this short, fast-paced novel, both among and outside the Alderban family. Besides mother Alicia and daughter Tina, there is the father, Jubal, who comes across as a bit weak and helpless; Dane, the brother and novelist who totally believes in the legend of the du-aga-klava; and Herschel, Jubal’s wild, elemental brother who seems to have stepped right out of the pages of Wuthering Heights. Other suspects include a guy named Walter Dannery who was fired from the family business for embezzling and ended up serving some hard time. Then there’s Salardi, a roboticist with some ties to the Alderban family and is now allegedly wanted for some crime he committed in the Inner Galaxy.

Koontz sets up everything quite nicely, and he manages with a sure hand to merge the genres of science fiction and mystery, a mash-up I have enjoyed and still do since I first read Asimov’s The Caves of Steel. While depth of character is often a bit thin at times, each character does come across as real and believable, and it was easy for me to get sucked back into the give-and-take relationship between Tina Alderban and Baker St. Cyr.

I think Koontz wrote a decent mystery here, and whether or not he fools you, whether or not you can discover who or what the murderer is all depends on your own powers of deduction. At any rate, it was fun to revisit this novel, a very nostalgic reread, and I enjoyed it the second time around. I don’t think Koontz ever wrote anything else starring Baker St. Cyr, and if he didn’t, that’s too bad. He might have had a nice little series going with this one. But you have to remember, this was 1973, and still some years away from the market-driven glut of endless sequels and franchises.

What I found interesting were little asides that Koontz tossed off, like how most major corporations had their own industrial police forces and even armies. And those corporations with a million or more employees often have their own set of laws. All very “Haliburton,” I thought. And of course, the fun is in the looking back, at the conventions of the day, what was “in vogue” back in 1973, and what came to pass when the future landed on us. Of course, there’s no mention of DNA, no internet, no cell phones or personal computers, and no Facebook in this futuristic novel. There are, however, still tape decks, waterbeds, and telephones with lines that can be cut.

Next time out, I’ll revisit Koontz’s wild ride of fantasy, sci-fi and the supernatural: The Haunted Earth. Until then… keep reading!

Joe Bonadonna’s last review for us was the anthology Doctors in Hell.

I was fortunate enough to have a factory job in the early ’70s that allowed me to indulge in a weekly book-buying frenzy, and still have money left to send to places like California’s “A Change of Hobbit” for out-of-print titles. I bought Koontz’s “A Werewolf among Us,” “The Haunted Earth,” and “Hell’s Gate,” plus some Ace doubles, when I found them on the bookstore and newsstand shelves. I still have ’em all, and they’re even still in pretty decent shape. It’s a real kick to see they’re all being re-discovered, and, even better, still worth reading.

Smitty59 — sounds a lot like my situation at the time. Always hanging at bookstores during lunch breaks. I love those Ace Doubles and miss them. I buy a lot of them whenever I see them at a con or used book store.