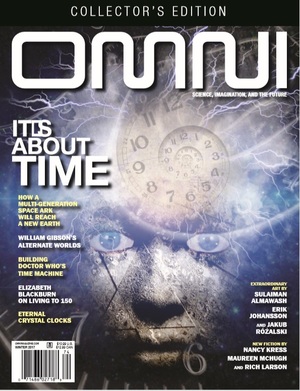 I was never quite sure what to make of OMNI magazine.

OMNI first appeared in 1978. It was published by Penthouse publisher Bob Guccione and, while it didn’t publish pornography, it never quite became a real science fiction magazine, either. True, it published some of my favorite SF of the 80s, including the brilliant SF/horror tale “Sandkings” by George R.R. Martin, “Unaccompanied Sonata” by Orson Scott Card, and stories by Philip K. Dick, William Gibson, Alfred Bester, Harlan Ellison, Bruce Serling, Gene Wolfe, and many others.

On the other hand, it’s also the only SF magazine I’ve ever thrown away. When I moved to Belgium for a year in 1992 and had to put my books in storage, I chucked my complete collection of OMNI magazine in the trash because it wasn’t worth the back-breaking effort of moving all those heavy boxes. There just wasn’t enough fiction, and way too many UFO articles and other pseudo-science for my taste.

I’m not quite sure what to make of OMNI‘s return to print late last year, either. Mostly because — unlike the original magazine launch, which had a $3 million advertising budget — it was done completely under the radar. I never saw a print copy, and only heard the magazine was back via a few stray comments on Facebook. Amazon has no copies in stock. It took a while to find the website, and the Subscribe Now! button doesn’t work (probably because I have a pop-up blocker on, but still).

Nonetheless, some diligent digging convinced me that the magazine has, in fact, actually returned to print, and this isn’t all just a vague internet rumor. For one issue, at least. And that issue contains some original fiction by top names — Nancy Kress, Maureen F. McHugh, and Rich Larson — and other interesting content.

It also has the luscious interior art and easy-on-the-eyes design that I remember from the old mag. Have a look. 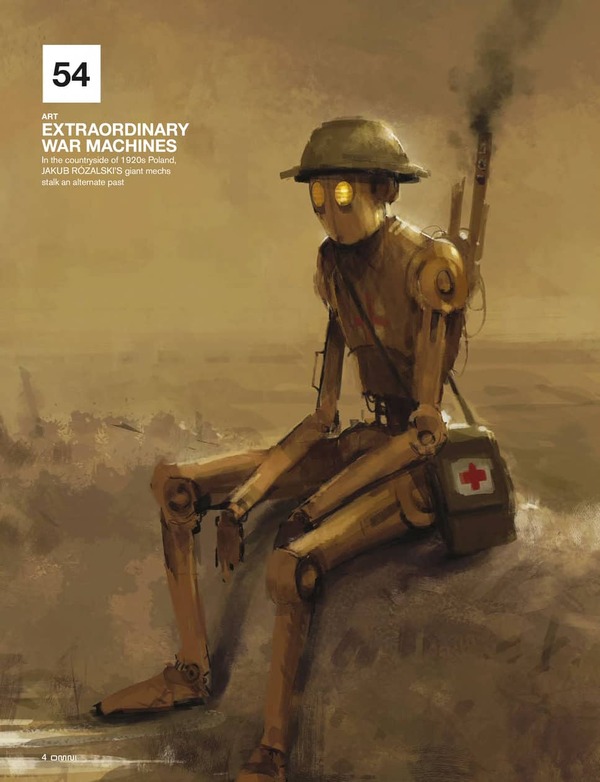 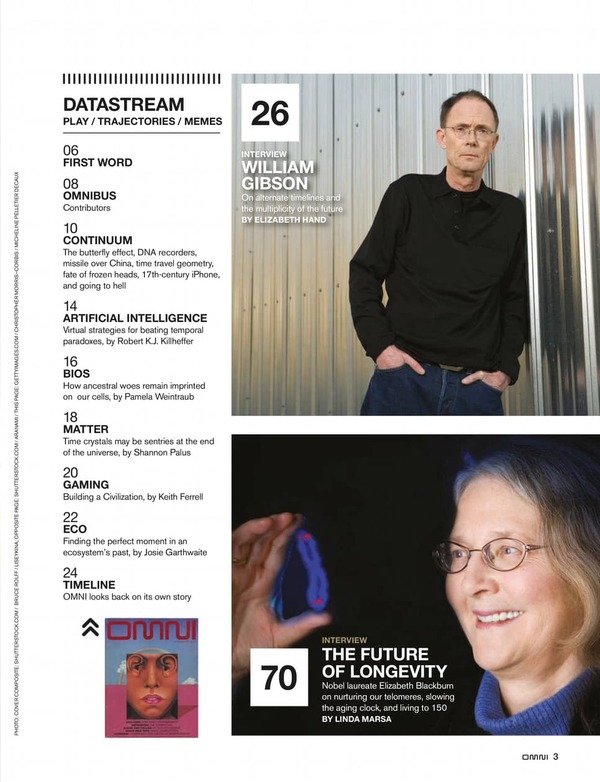 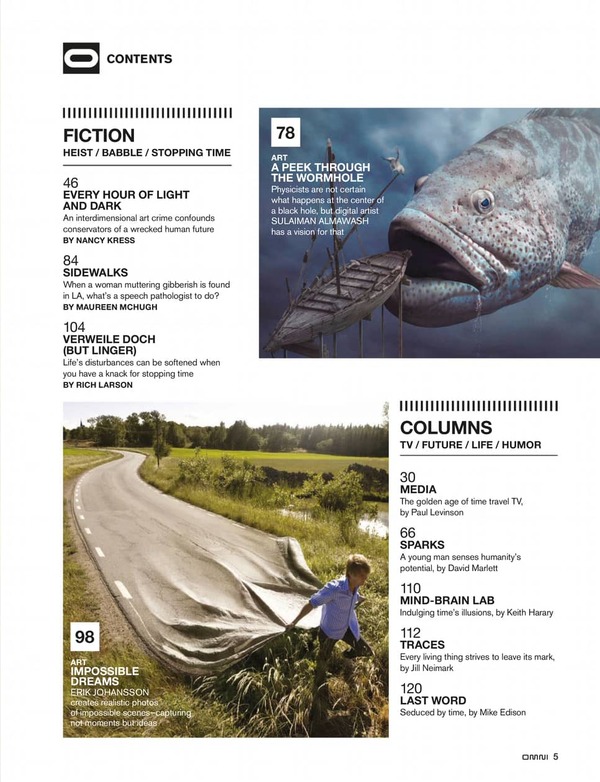 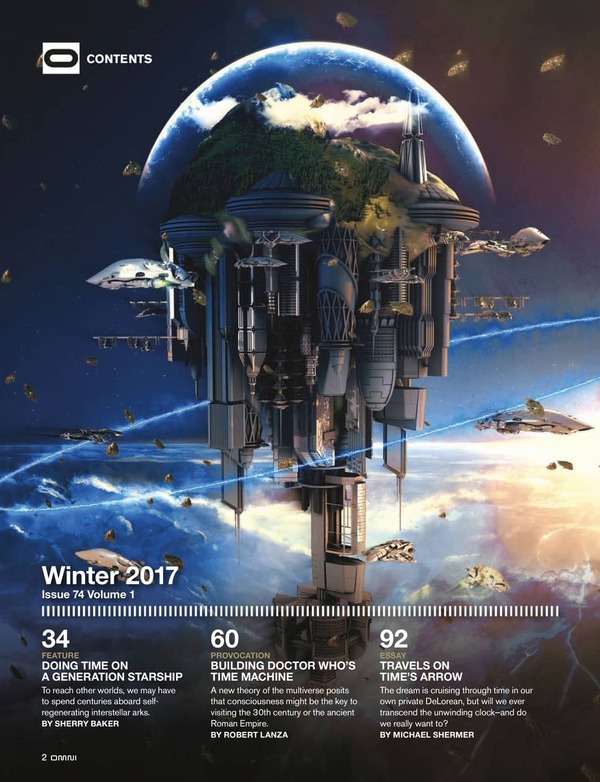 There’s no word on when the next issue might be published — or even if there will be another one. I assume a lot depends on the success of this one in the marketplace.

I’m not sure if my inability to find a copy is a good thing or a bad thing. It is sold out? Or does it just have terrible marketing and distribution? Or both?

Here’s the complete TOC for the Winter 2017 issue.

Andrew Liptak has a fine look back at the rich history of OMNI magazine at Kirkus Reviews. Tor.com has more details on its return to print.

OMNI Magazine is edited by Pamela Weintraub and published by Penthouse Global Media. The Winter 2017 issue is 120 pages, priced at $10.99. Subscriptions are $65.94 for four issues. Order copies here. The magazine’s Facebook page is here.

Insert “Shut up and take my money!!!” Futurama meme…

I loved Omni magazine. When I spotted the first issue, I was intrigued, and when I saw that the magazine promised fiction by Ray Bradbury, I was instantly hooked. In those pre-internet days, I had no way to know that Ray Bradbury had completely stopped writing science fiction over two decades earlier.

Nevertheless, there were compensations. I was blown away by exactly the same two stories John mentions, and of course the magazine contained much else of interest.

I stopped buying it after about three and a half years, because they gradually reduced the number of stories per issue, and also because a bundle of those magazines weighs a ton. Ray Bradbury was eventually featured, but not with anything near his best material.

I haven’t seen the new one, but the single issue so far has produced more than one Year’s Best selection.

> I stopped buying it after about three and a half years, because
> they gradually reduced the number of stories per issue, and also
> because a bundle of those magazines weighs a ton.

You bailed before I did. I collected OMNI faithfully from 1978 until 1987, when I moved to Illinois for grad school. I always read Martin Gardner’s gaming column, and enjoyed the art sections. But like you, I found the reasons to read the magazine getting thinner as they years went by.

My brother Mike used to shake his head at my collecting habits. He moved every semester in college, and took great pride in reducing his possessions down to what would easily fit in his compact car.

I never thought that would be an issue for me. Until I had to move nine years of OMNI magazines out of my apartment and into storage, and then into my new place.

I happy moved thousands of paperbacks, comics, and games. But when it came time to move those OMNIs a second time, I chucked them in the trash.

[I did, I admit, sort through them and picked out a handful of issues to save, including the issue with “Sandkings” and all their BEST FICTION FROM OMNI specials.]

It was the only time I ever threw out magazines. And strangely enough, I’ve never regretted it.

I also threw out my Omnis. Something about the format made them ungainly …

The McHugh story in the new OMNI is excellent, and the other two stories are pretty decent.

Even though I bailed as a regular reader, I continued to buy occasional issues for several years. AND I still have all the issues I bought, except the one with “Sandkings” in it. I seem to have misplaced that one. Damn.

Rich Warren shared the news with me that the parent company declared bankruptcy a few days ago, “so I doubt any more issues are coming.”