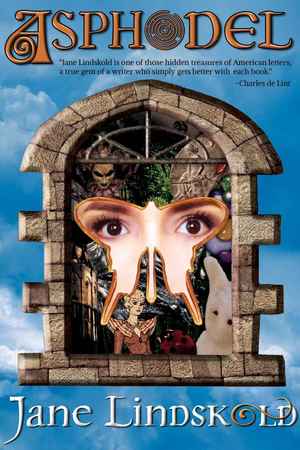 I had the privilege of reading Asphodel by Jane Lindskold soon after it was written and cannot recommend it highly enough.

It’s surreal, but in a very grounded way, if that makes any sense. Lindskold weaves together deep myth and literary allegory with fabulist escapism, and manages to take the reader on a very real journey into human love, loss, and redemption.

The book is available as a trade paperback, and as an ebook on Kindle, Nook, i-Tunes , GooglePlay, and Kobo.

Nameless in a doorless tower graced with seven windows, she is imprisoned. Who is her jailer? What is her crime?

After she discovers the secret of the seven windows, the nameless one, accompanied by two impossible companions, sets forth on fantastical journeys of exploration. But, for the nameless one, learning her name may not be a welcome revelation, and the identity of her jailer will rock the foundations of a tower that has come to be as much refuge as prison.

Read on for Lindskold’s post on how this book came to be.

From various comments, I’ve gathered that some people think that Asphodel belongs to one of my existing series. That isn’t the case. It’s a stand-alone novel, and likely to remain so.

Asphodel had an interesting starting point. The only writers’ group I belong to is called First Fridays. First Fridays was founded by Tony Hillerman, Norm Zollinger, Madge Harrah, and several other New Mexico authors to be a place where professional writers could meet up and talk shop. Its only rules are that First Fridays has no officers, no agenda, and that all members must be professionally published.

These days the format of the meeting is a sort of round table, where everybody present takes a few minutes to talk about what they’re doing. One day, after about half the group had talked – mostly about business – Paula A. Paul said: “Isn’t anyone writing?”

Her words hit me between the eyes. I realized that, since I’d finished my last project, many weeks had gone by without me writing any fiction. Non-fiction, certainly. But no fiction. Business considerations seemed to take all my time. Worse, whenever I started thinking about writing something, all that business stuff started chattering in my head. The buzzwords of the moment. The latest argument on social media.

I realized I didn’t really like the inside of my own head very much.

Paula’s words continued to haunt me. After a few days, I said to Jim, “I’ve got to start writing again. I don’t know what and I don’t want to know what. But I want to write the way I used to write, just because I love it.”

To keep myself from falling into old patterns, I divorced myself from my computer. Instead, I took out an address book that had been part of a set my sister-in-law, Beth, had given me one year for Christmas. I pulled out a box of colored pens, sat down at the kitchen table, and promised myself one hour a day just to write.

The first word I wrote was “Asphodel.” The story flowed from that point. Whenever I found myself thinking too hard, I’d pull out my set of Story Cubes, grab a few at random, throw them down, and then work whatever hit me into the story. I changed color pens a whim. When I started, I thought I’d only be writing a short story but, when I finished the address book, I found there was more story there. I grabbed a notebook in which I keep track of birthdays and started writing on all the blank pages. When I was done with that, I found another partially-used blank book. Finally, I ended up with a spiral notebook.

When I finally wrote “The End” I found myself curious as to how much I’d written. I started typing and discovered that I had something like 58,000 words – too long for most short fiction markets and, anyhow, the story defied most market categories.

Jim was curious about what had been keeping me so absorbed all those weeks, so I printed him a copy. When he started coming home and telling me about where he was in the story, what he was wondering about, I began to wonder if I’d accidentally written something that was coherent to someone other than myself. As a test, I asked a couple of friends I could trust to be brutal with me if they’d read it. They both did, both liked it and both said they hadn’t wanted it to end.

I balked at writing more for no reason other than to write more. But I promised to keep myself open to the idea that there was more story. And a few weeks later, the characters started talking in my head, picking up as if we’d never stopped. I wrote more, gave the manuscript to a few more friends – deliberately picking some who I thought would hate it. No one did.

As a final test, I read the whole manuscript aloud in twenty-minute intervals to my gaming group. Not only did they seem taken with the tale, they didn’t have any trouble remembering what was going on, even though a week, sometimes more, would have gone by between readings.

So, I decided that I wanted to share the story with a larger audience. My agent offered to shop the manuscript around, but I was so closely immersed with the tale by now that self-publishing seemed the best option. Rowan Derrick (who as one of my gamers was familiar with the story) agreed to do the cover, taking on my request to put together a photo mosaic that would be both surreal and firmly anchored in the material of the novel.

And now, here it is… My paper ship built from scraps and colored ink. I hope you will climb aboard and take the trip – discover for yourself the secret meaning of Asphodel.