Black Gate has some very prolific reviewers. Ryan Harvey has produced 290 articles for us, Matthew David Surridge 330, and Sue Granqust has written exactly 400. But the most prolific reviewer in our small community is doubtless Rich Horton who, in addition to his duties here, writes a regular monthly column for Locus, contributes short fiction reviews to places like Tangent Online, and maintains his own blog, Strange at Ecbatan. Not long ago Rich posted his 100th Ace Double Review at his blog, covering the forgotten novels Alien Sea by John Rackham and C.O.D. Mars by E. C. Tubb, published in 1968.

I started these on the wonderful old Usenet newsgroup rec.arts.sf.written back in the early 2000s. I retain an interest in Ace Doubles for an intersection of reasons… the feeling that they give room for an awkward story length (25,000 to 45,000 words, say); the fact that they provided space for new writers to get published; the sometimes goofy subject matter; the fact that they could be a home for unpretentious adventure SF; and their uncommon format. But it must also be said that a lot of the stories published as Ace Doubles were downright crappy. And indeed this review, the 100th, perhaps appropriately features a couple of awfully weak short novels.

Even though the novels sucked, Rich gives it his all, as always. Here’s his thoughts on two bad science fiction novels by John Rackham and E.C. Tubb.

Rackham’s Alien Sea is the longer novel, at something close to 65,000 words. (Tubb’s C.O.D. Mars is just over 40,000 words long.) Alien Sea opens in space, with a severely damaged spaceship struggling to make its way around the sun back to their planet, Roggan. They make it, and find that no one survives — an atomic war has caused almost all the land on the watery planet to be sunk … the crew of this ship, and a few survivors of their rival nation, must cooperate to rebuild some semblance of civilization.

Then things jump forward a couple of thousand years, as Dennis Dillard approaches the planet Hydra. He’s a professional “feeler”, who has his emotions recorded to be used in a future entertainment in which people get to “feel” the emotions of the characters. Hydra is a water world that Earth has started to exploit, in tentative cooperation with their enemies the Venusians, who are the descendants of Earth politicians exiled decades before. Dillard arranges a chance to meet the Venusians — the emotions of encountering them seems like a good opportunity for recording. He also gets to visit the research station run by a former professor he hates, and in the process gets involved with a woman secret agent of sorts; and of course he visits the pleasure city on Hydra…

There are actually some potentially interesting ideas in this book, but there’s too much stuff that just doesn’t make much sense; and the book is too long, too boring for long stretches. 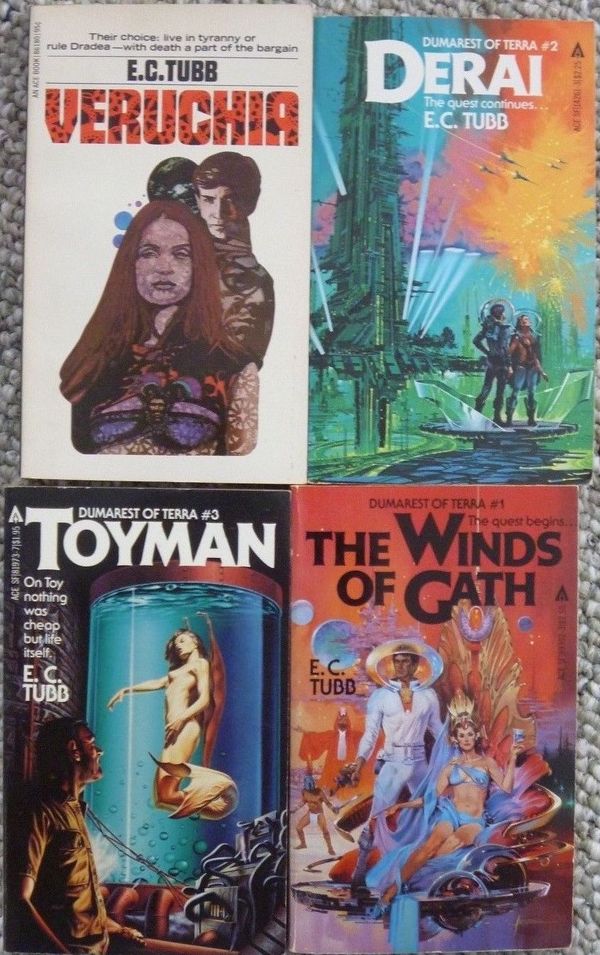 E.C. Tubb is best know for his Dumarest of Terra novels, the long-running (33-volume!) series which began with the 1967 Ace Double The Winds of Gath, and ended four decades later with Child of Earth (2008). Here’s Rich again.

Tubb’s C.O.D. Mars opens with a detective, Slade, taking a job: to smuggle three surviving explorers returned from Proxima Centauri to Mars — he’ll be paid Cash on Delivery, hence the title. These explorers, it turns out, are in quarantine, in Earth orbit, supposedly because of the threat of an alien virus. The focus then shifts to Ed Taylor, an employee of Slade’s, who is trapped in a loveless marriage, with a wife who won’t have sex with him, and dreams of escaping to one of the space colonies with a hot young woman. Taylor ends up in trouble — seduced and drugged by a pretty woman, and forced to take a risky job… which turns out to be Slade’s trick: he needs someone to pilot the ship he’ll send to rescue the explorers.

For a while here, things seemed kind of interesting, and decently told in Tubb’s noirish and cynical style. Then we get introduced to the woman doctor running the quarantine, and to the actual explorers, and before long we learn that the quarantine is for a good reason — they really have been taken over by a sort of semi-intelligent slime mold from Proxima Centauri. Before long, Taylor’s rescue attempt has gotten him infected as well…

At least it reads fairly quickly, but it’s a pretty weak novel. Tubb remains worth a look — though not requiring a look — for his Dumarest books; but C.O.D. Mars is pretty sad stuff.

Alien Sea / C.O.D. Mars was published in January 1968 by Ace Books. It is 99/154 pages, priced at 60 cents in paperback. The covers are by George Zieland and Jack Gaughan. Alien Sea was reprinted in hardcover by Dennis Dobson in 1975, C.O.D. Mars was reprinted in the UK (under the title Fear of Strangers) in 2007 by Ulverscroft Large Print Books, and in 2014 by Gateway / Orion. There are no digital editions of either book.

I love Ace Doubles, but they’re definitely not for the faint of heart. Picking one up is like playing Russian Roulette with four loaded chambers.

Analogies like that do not encourage the rest of us to pick up Ace Doubles! With odds like that, there are just too many other good books out in the world!

James, I almost said FIVE loaded chambers! But I decided the ratio wasn’t quite that bad.

And some terrific stuff by some excellent writers (usually early in their careers, admittedly) appeared in Ace doubles. Philip K. Dick, Ursula LeGuin, Robert Silverberg, Samuel Delaney, John Brunner – these were no slouches. (In my experience, Brunner always produced a winner.)

It’s actually the grab-bag, never know what you’re going to get is one of the aspects that makes Ace Doubles fun (for me, at least). Your tolerance for them as a whole, with their many misses, will largely be determined by your devotion to the tropes and trappings of pulp SF.

In my case, I bleed that stuff, so it’s ok. (I think Rich Horton does too, or he wouldn’t keep reading the damn things.)

Whoops – I got so caught up in my heavily qualified defense of Ace Doubles that I got garbled up a bit, but I think you get the point.