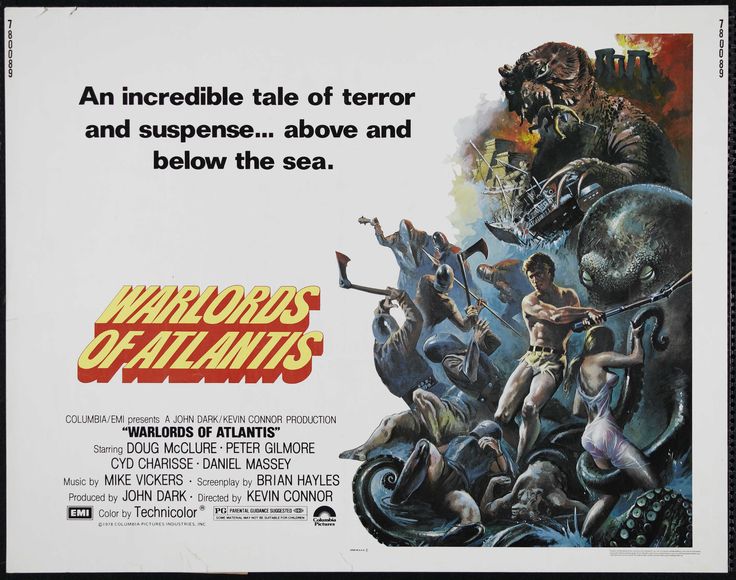 In December, my patience with North American video distributors at last ran out. If they refused to deliver Region A Blu-rays, and in some cases even DVDs, of movies from my beloved Hammer Film Productions, I needed to take drastic steps. Yes, I asked Santa Claus for a region-free Blu-ray player. Santa delivered as promised and I immediately ordered a Blu-ray of The Plague of the Zombies from Amazon.uk.

Next on the list … Warlords of Atlantis. It’s not a Hammer Film, but going region-free brings benefits like at last owning a copy of the fourth Edgar Rice Burroughs film from the team of director Kevin Connor and producer John Dark. It isn’t actually an Edgar Rice Burroughs adaptation, but in intent and most of the execution it might as well be.

Explain? Glad to. Connor and Dark made three low-budget movies in Britain based on ERB’s most popular science-fiction stories: The Land That Time Forgot (1975), At the Earth’s Core (1976), and The People That Time Forgot (1977). This Burroughs trio struck gold at the box-office, especially with adventure- and monster-loving kids. Connor and Dark planned a movie based on A Princess of Mars, this time working with EMI Films in co-production with Columbia.

The move to Mars made sense to everyone — except the Gods of Finance. Fifteen-foot-tall green warriors, squadrons of flying Heliumite battleships, and a hero capable of leaping hundreds of feet through the low Martian gravity weren’t feasible on a $2 million budget. Connor and Dark dropped A Princess of Mars and decided if they didn’t have an ERB book they could afford to adapt, they had to invent one.

And so we have 1978’s Warlords of Atlantis, which asks the question: “What if Edgar Rice Burroughs did his own action-fantasy riff on Twenty Thousand Leagues Under the Sea the same way At the Earth’s Core was a high-adventure riff on Journey to the Center of the Earth?” The answer: “It would go pretty well. Not as well as an actual Edgar Rice Burroughs movie, but it’s Saturday afternoon, so why not?” Warlords of Atlantis comes fourth out of four, but it’s a tight grouping.

The burly American, Greg Collison (Doug McClure, who played the same role in At the Earth’s Core), and scientist Charles Aitken (Peter Gilmore) are on an archaeology expedition aboard the Texas Rose. As the two men descend in Collinson’s miracle diving bell, a plesiosaur-like beast attacks them in a scene recalling the pterodactyl attack on the plane flying into Caspak in The People That Time Forgot. Meanwhile, the crew of the Texas Rose plot to kill the heads of the expedition and steal the gold statue they hoisted up from the ocean floor. This echoes the shifts in control in the U-boat in The Land That Time Forgot. 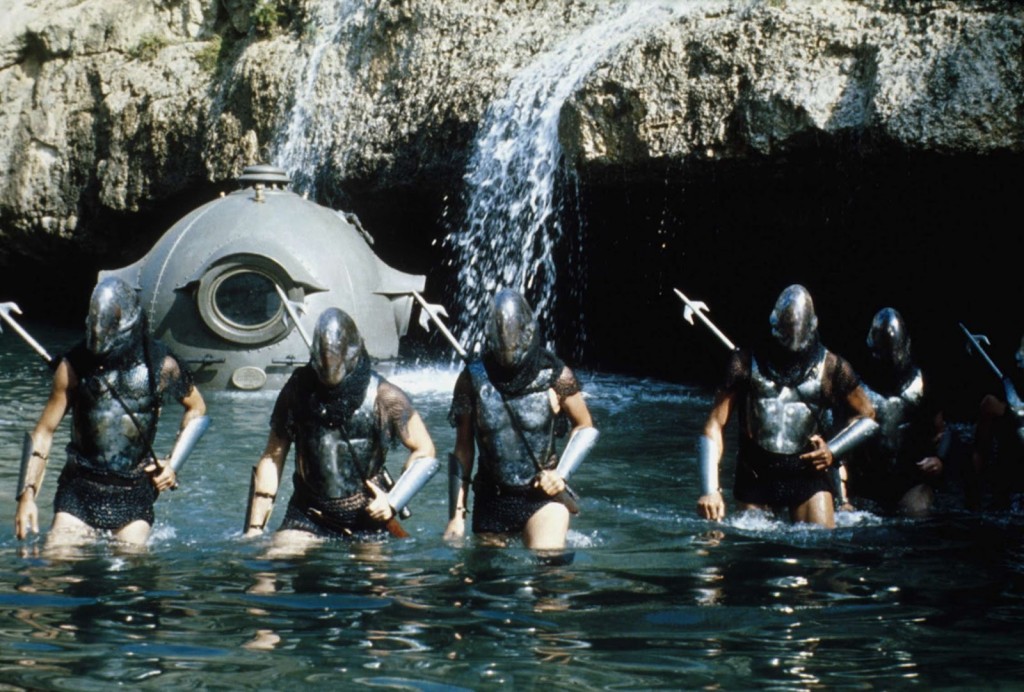 The treachery of the crew doesn’t have time to succeed, since a titanic octopus attacks the diving bell and the ship, dragging Collinson, Aitken, and the three greedy crew members into an underground cavern. There they discover the lost cities of Atlantis, slowly crumbling away one by one, but still under the rule of the haughty race of Atlanteans, descendants of Martians who arrived on Earth in prehistory. (Hey, they snuck Mars in there after all!). The Atlanteans control a slave population kidnapped from the surface and surgically altered with gills. The elites of Atlantis tempt Aitken to join them in their scientific plans for Earth’s future, while Collinson tries to find a way to escape with the captured humans.

This sounds similar to a number of tyrannical cultures from Burroughs’s work, such as the reptilian Mahars. But the Atlanteans are closer to an alien race from the original Star Trek — especially in the set and costume designs. The resemblance is so strong that at first it’s distracting. Cyd Charisse as Atsil, Queen of Atlantis, wears an outfit and wig that would fit right into Season 3 of Star Trek. Think France Nuyen in “Elaan of Troyius,” only with even bigger hair. There are other out-there props and costumes, like the full-cover helmets for the guardians and the fish-scale tunic Michael Gothard struts around in as an Atlantean elder. Gothard himself is almost a piece of set design, an actor with a naturally otherworldly presence and delivery.

Among the prisoners of Atlantis are two survivors of the mystery ship the Mary Celeste, Captain Briggs (Robert Brown) and his daughter Delphine (Lea Brodie). Working a real-life mystery into the fantasy is a development Burroughs would’ve enjoyed, as he liked to graft oddities from reality onto his fantasies. The Mary Celeste survivors don’t do much for the rest of the movie, however, aside from giving Collinson a weak romantic interest in Delphine. The romance elements are undercooked in all these movies, and this one never got near the oven.

But we don’t need the romance to work. We need the assortment of low-budget monsters to work — and they do. The stiff model of the plesiosaur attacking the diving bell is an underwhelming opener. But the immediate follow-up, the giant octopus known as the Sentinel, is an accomplished melding of a miniature beast and a full-scale mock-up with animated tentacles. The shots of the Sentinel grappling onto the Texas Rose contain some of the most convincing model-work in this series. It’s difficult at times to tell the switch between the model ship and miniature octopus and the actual ship and full-sized octopus. 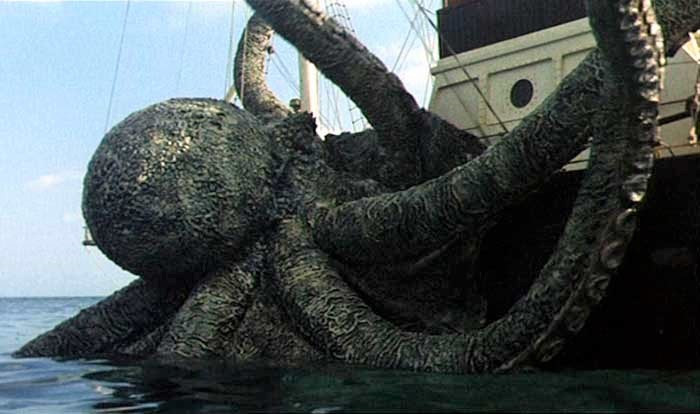 Weirder beasts are still ahead: the Mogdaan, described as a giant millipede; the Zaargs, tortoise-like monsters who assault the walls of Atlantis; and flying super-piranha. The last are a real hoot. As the heroes make their escape from Atlantis across a narrow causeway, off-screen cannons launch the fish props at them. It looks silly and I love it. It was 1978 and the days when theatrical films could get away with effects like this were limited, so just luxuriate in it.

The top monster sequence is the return of the Sentinel for the finale. Repeating a monster attack normally isn’t the best idea, but this climax is built on a solid plot twist. Collinson and company make it back aboard the Texas Rose after escaping Atlantis, and it looks like the movie is about to end. Suddenly … bam! A major reveal, a shipboard fight, and the Sentinel makes a spectacular assault on the Texas Rose. This is one place where Warlords of Atlantis is better than its predecessors: using a well-hidden twist to rocket the movie into a big finish.

Where Warlords of Atlantis lags far behind the three ERB films is the believability of its world. This isn’t the fault of the sets or the effects. In fact, the enclosed caverns look superior to the more artificial ones in At the Earth’s Core. The matte paintings of the towers of Atlantis and the grottoes beyond are also impressive and add scope. But overall, Warlords of Atlantis offers up a less convincing setting. The Atlantean culture never feels fully plausible or organic, as if it were a transplant from a ‘60s British television show that had most of its tapes wiped. This lack of authenticity might be due to not having vintage source material — like an Edgar Rice Burroughs novel. Left to their own devices, the Connor and Dark team were unable to craft a story that feels genuine to the classic Age of Adventure. It’s a copy. Even though the copy was made with an excellent color printer, it’s still not the real article.

Warlords of Atlantis wants to feel as if it were adapted from a novel, so it made sense to publish a tie-in novelization as reverse engineering. Paul Victor wrote the novelization in first-person from the view of Collinson, which fits the style of At the Earth’s Core and The Land That Time Forgot. The book was dedicated to the memory screenwriter Brian Hayles, who died the year of the movie’s release.

Hayles wrote one more script before his death: the next Connor-Dark project, Arabian Adventure (1979). I have only the haziest recollections of this movie, and I’ve been given fair warning about how well it holds up. But since I can purchase it through Amazon.uk, I may have to give it a look. It has both Christopher Lee and Peter Cushing! But there are plenty more Hammer movies ahead of it on the shopping list, and many of those also star Christopher Lee and Peter Cushing.

(Not to be confused with Atlantis: The Lost Continent, but that might also be worth a look, and is conveniently available on iTunes.)

I also picked up the British DVD last year and my reaction to this film was pretty much the same as yours.

Huh, I didn’t realize there was a next Connor-Dark production. I thought there was just the four.

I guess when I finally do get a blu-ray player, I’ll have to make sure it’s a region-free one.

@Joe – Yes, Lost Continent is on the shopping list.

haa Black Gate done a Hammer movie article so i know all of the ones out there to start to check out? i am just now wanting to start seeing and maybe collecting all these things, and wonder what else like this might be out there?

Yeah, this movie is plenty of silly fun.

I’ve had a bootleg copy for a while.
While I was pleased to be able to watch the film again, I was delighted to discover that the score is as delicious as I remember it being when I saw it at the Wayne Drive In back in prehistoric times.

Here’s a link to the end titles over on Youtube.
As soon as you punch the link, stand up and turn your leonine head to gaze at the distant horizon. You will see a glorious destiny of epic adventure there, I promise.
Of course this only lasts as long as the music plays, and that’s just for a minute and three seconds.
But it’s mighty fine minute…