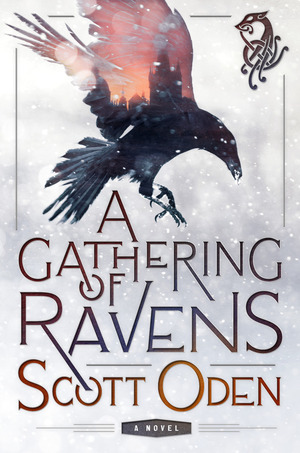 Black Gate is very pleased to offer our readers an exclusive excerpt from A Gathering of Ravens by Scott Oden.

In his review, Fletcher Vredenburgh wrote:

Oden’s novel knocked the heck out of any prejudices I had. New or old, this book kicks ass, and is one of the best swords & sorcery novels I’ve read in a while.

Grimnir, the last of his race, lives on the Danish island of Sjaelland, dreaming of revenge against Bjarki Half-Dane, the man who killed his brother, Hrungnir. His desire to cleave his enemy with his trusty seax (a old Germanic sword), leads him from Denmark to England, and finally to the field of Clontarf, in Ireland…

From the first appearance of Grimnir to the final showdown at Clontarf, the pace never lets up. With an intimate and detailed knowledge of the history and legends of Northern Europe, he has told a tale that lives and breathes “that Northern Thing.” You can smell the surf, the heath, and sense the sidhe lurking just beyond your field of vision. Oden writes in clean, clear prose, never letting his characters get crushed under the weight of bad archaisms or ruined by inappropriate modern speech. A Gathering of Ravens belongs on the same shelf as the best modern swords & sorcery novels, and on the shelf of any serious swords & sorcery reader.

Read an exclusive excerpt from A Gathering of Ravens here.

This is the one to get, folks. Real, honest-to-goodness S&S in the REH tradition. Grimnir is a kick-ass protagonist of legendary proportions, and the historical setting in Dark Ages Ireland under Norse rule reeks of that “Northern Thing” like the best Poul Anderson epics. Blood, thunder and the clash of the Gods themselves flash before the mind’s eye and echo in your skull. This is good writing from a writer who understands traditional S&S and writes it for today’s reader.

Great presentation, John! Looks gorgeous! Thanks for that . . .

And thank you, Darkman!

Scott; here’s hoping this book and the sequels get the exposure and following they deserve. Not enough of this kind of writing out there, as far as I’m concerned!