To you, I am orcneas. To the Dane, I am skraelingr. The blasted Irish would name me fomorach,” Grimnir said, then smote his breast with one black-nailed fist. “But I am kaunr! Do you understand now?”

Grimnir from A Gathering of Ravens 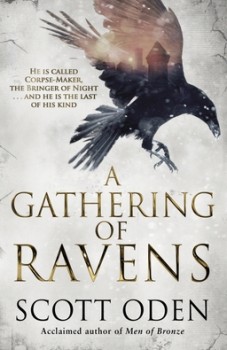 You know me: I’m the guy who reads mostly old swords & sorcery novels and short stories. Aside from a few by Milton Davis and P.C. Hodgell, I haven’t read many new S&S novels. My experience with contemporary fantasy novels has been mostly… disappointing.

I’m also a guy who is on record as disliking the utilization of orcs in modern fantasy. In the works of their creator, J.R.R. Tolkien, orcs are perversions of elves created by Middle-earth’s satan figure, Melkor. In modern fantasy they’ve become little more than woefully misunderstood warriors — basically fantasy Klingons. So, when Scott Oden sent me a copy of his latest book, A Gathering of Ravens (2017),  and I learned its protagonist was an orc, my hopes weren’t high. Well, Oden’s novel knocked the heck out of any prejudices I had. New or old, this book kicks ass, and is one of the best swords & sorcery novels I’ve read in a while.

Grimnir, the last of his race, lives on the Danish island of Sjaelland, dreaming of revenge against Bjarki Half-Dane, the man who killed his brother, Hrungnir. His desire to cleave his enemy with his trusty seax (a old Germanic sword), leads him from Denmark to England, and finally to the field of Clontarf, in Ireland.

Etain is a young woman, disguised as a man, bound for Roskilde to evangelize the Danes. After a bloody run-in with Grimnir, she finds herself bound to him and forced to act as his guide across the British Isles in search of his prey. With no recourse but to stay by his side, she follows him into the mystic heart of Yggdrasil, the world tree, traveling through time and space. The mismatched pair, devout Christian woman and resoundingly pagan monster, face off against numerous supernatural and mundane foes before reaching the book’s rousing conclusion on a field outside of Dubhlinn. Their story lets up only a few times, but those calmer passages serve to allow magical creatures or armies the time to marshall their forces for the next burst of violence.

So what made me love this book so dang much? Well, foremost, Grimnir. With this betaloned, vengeance-obsessed orc, Oden has created an anti-hero worthy of standing beside Karl Edward Wagner’s Kane. Grimnir is a brutal killer, reveling in his lethal talents, and always with an eye on how to outwit anyone standing in his way. He is completely unapologetic and unashamed of his brutal nature. Only once does he falter in his self-centered ways, and even then, he has no problem in appealing to an ancient power for aid that leads directly to the death of hundreds.

The Shepherd of the Hills said nothing for a long moment; when it did speak, its voice was subdued. “What aid do you seek, son of Balegyr?”

Grimnir surged to his feet. “Shake the bones of Ymir! Call up whatever sorcery remains to you and crack open that cursed stone city! Topple its blasted walls and send your spirits to guide me. I will bring Hrothmund to you, and at the same time recover what he stole from me!”

“And the innocents who will die?”

“Innocents? Have they not turned from you and embraced your enemy, the Nailed God? Have they not burned your groves and wrecked your stones? Do they not hunt the last of your followers? Innocents? Faugh!”

His singled-minded pursuit of Bjarki Half-Dane is almost laudable. Bjarki himself is a vicious killer and schemer, presently rousing the kingdoms of Dubhlinn and Leinster to rebel against the Irish High King. His death at Grimnir’s hand seems a warranted goal. Of course, Grimnir’s brother Hrungnir is also know as Grendel, and his death was no great loss to the world. By the nature of his doggedness and contempt for the forces arrayed against him, Grimnir is a villainous soul who manages to stand out in a world trembling under the assault of legions of villainous souls. 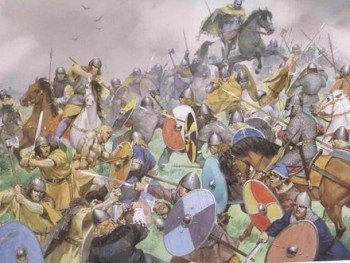 Etain is as enthralling a character as Grimnir. Much of her time is spent reacting to the magical world that exists just outside the normal world; one she has been taught is either imaginary or, at best, a remnant of devilish, pagan times. Underlying Grimnir’s ferocious trek is the struggle between the setting sun of the pagan world of banshees, forest spirits, and Tuatha de Danann, and the rising sun of Christianity. Oden’s handling of her efforts to believe in and understand this new world, and her eventual acceptance of it while never losing her faith, is nuanced and well done. She may not cross the stage of A Gathering of Ravens trailing blood and fire like Grimnir, but her resilience and sharp intelligence make Etain a more than worthy co-protagonist.

I’ve written about the Northern Thing. The phrase was coined by W.H. Auden when he was referring to Tolkien’s love of the myths of the Germanic peoples (Germans, Anglo-Saxons, Norse). It’s come to mean the whole panoply of Nordic gods, elves, dwarves, giants and dragons, set in a universe that’s fated to end in fiery destruction where even the divine powers will be destroyed. Oden clearly lives and breathes the Northern Thing, and brings the world of Northern Europe at around the beginning of the 11th century to dark and glorious life. He has his own distinct story to tell, but into it he has woven the strands of great legends and heroes — Beowulf, Brian Boru, Grendel — seamlessly. I’ve griped a lot about authors falling back on Nordic tropes too often and not exploring other cultures for their stories. The thing is, Nordic is what I love most. Reading A Gathering of Ravens, I realized my problem is that most writers working the Northern Thing just don’t do it well. Oden tells a story that feels lifted straight from the sagas and eddas. Oden’s use of an orc succeeds so powerfully because he grounds Grimnir in the dark stories of bent and fanged monsters raging at all of creation. This book is a masterful achievement.

I know Scott (online) and like him. But I haven’t read any of his other books. This is my first taste of his writing and it’s killer. From the first appearance of Grimnir to the final showdown at Clontarf, the pace never lets up. With an intimate and detailed knowledge of the history and legends of Northern Europe, he has told a tale that lives and breathes “that Northern Thing.” You can smell the surf, the heath, and sense the sidhe lurking just beyond your field of vision. Oden writes in clean, clear prose, never letting his characters get crushed under the weight of bad archaisms or ruined by inappropriate modern speech. A Gathering of Ravens belongs on the same shelf as the best modern swords & sorcery novels, and on the shelf of any serious swords & sorcery reader.

Bonus: For a special taste of that Northern Thing, click HERE.

Thanks, Fletcher! Glad you liked it, and glad I could bring you into the “Orcs are cool!” camp 🙂

Much like you, I felt there was very little “real” S&S being published today by mainstream publishers, but a fair amount of inde and online stuff can be found. AGOR changes all that with kick ass S&S available from traditional publishers. Scott’s historical fiction works are excellent, and The Lion of Cairo mixed history with fantasy elements, but AGOR is a grand-slam home run. If you liked this, you must check out his other works, because they are solid reading with the essence of Robert E Howard in the mix. And the best news; more Grimnir in the works!

This book is the perfect old school S&S written as a modern novel.