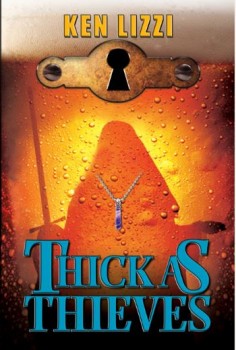 Swords & sorcery and hard-boiled crime stories share significant crossover in themes, characterization, and worldview. Both tend to have solitary heroes possessed of highly personal codes of behavior, flourish on the margins of civilization (be it the steppes of Turan or Poisonville), and over all, equal parts world-weariness and cynicism is de rigueur. Ken Lizzi’s newest novel, Thick As Thieves, amps up the comparison by being a hard-boiled swords & sorcery heist story.

Thick As Thieves’ opening echoes one of roleplaying’s hoariest tropes, by introducing all its primary characters during a fight, if not in a tavern, just outside one in the frontier city of Kalapo. Brick is a giant slab of a man, a veteran of the Merchant’s War, and given to bouts of berserk fury in battle. In dire need of work, he took up the post of bouncer at The Chipped Mug, a less-than-reputable tavern noted for its vinegary wine and its owner, Shib. Shib is Haptha, a non-human race derisively called Sharks for the dorsal ridge that runs atop their skulls. The Haptha are a race of capitalist empiricists who launched and won the war against the human Clackmat Confederacy and Leyvan Hierocracy to force them to give up their mercantilist ways. Glum Arent, an ever-present fixture in the bar, is by trade a poet, but makes most of his living writing letters for the illiterate, penning panegyrics for priests and politicians, and acting as general informant for those same clients.

A wagon wheel on one of Haptha Trader Vawn’s wagons breaks outside The Chipped Mug. While repairs commence, Vawn and one of his bodyguards, Dahlia, a relatively rare Leyvan swordswoman, enter the tavern. Outside, members of Kalapo’s Cartage and Drayage Guild take offense at the trader’s team fixing the wagon themselves. A fight ensues. When the guildsmen attempt to attack Vawn inside the tavern, Brick makes it clear he will brook no trouble, then proves it when his warning is rejected.

“Get the f–k out of the way, freak.” The leading red tunic reached out and prodded Brick — rather scornfully, Brick thought — in the midsection with the tip of his cudgel.

“Don’t,” said Brick. He felt the advance hints of the Fury, a faint haze of red specks at the edge of his vision. The jab with the club was insulting. And the tavern, and the safety of the people within was his responsibility. His job. He tried to keep the anger at bay, though not in great earnest. He recognized the dangers of surrendering to rage, but he liked the Fury. It was what made him a good soldier. It was what had allowed him to ignore fear — not dismiss it, not conquer it, but ignore it. It was what let him tear gaps in enemy positions, be the tip of a human wedge driving into a shield wall. He recognized the disadvantages in civilian life. Slipping the leash from impulse control could be a problem outside a war zone. So, he kept the Fury tightly reined in. But he missed it. And if this punk ass guildsman jabbed him again…

The Fury descended like a curtain of crimson sparks. Pent up frustration spewed from Brick like wine from a punctured goatskin bag. He batted aside the cudgel and grabbed the wrist, yanking the man towards him. Brick squeezed and twisted, hearing tendons pop and little bones grind together. At the same time, his other hand shot forward and gripped the guildsman below the armpit of his red tunic. Brick lifted the man, continuing to twist and pull on the wrist. The guildsman screamed as first elbow then shoulder dislocated.

The gears of the plot begin to mesh as soon as the fight is done. While Brick and Dahlia begin eyeing each other with great curiosity, Shib eyes the two items Vawn wears around his neck with even greater curiosity. The first is a token of Vawn’s position as a treaty-sanctioned Haptha merchant allowed to operate inside the borders of the Clackmat Confederacy. Shib is operating far outside the allowances of the treaty, and taking possession of Vawn’s indicator of rank would allow him to leave the primitive confines of Kalapo and find richer pastures. The second is a jewelled pendant that Shib, in jest, tells a drunken Glum is a fabled Haptha artifact called the Panaegic Periapt that gives its wearer power over any thing summoned from another world. It is on this bit of teasing that much of Thick As Thieves hinges.

Shib decides to secure Vawn’s two necklaces for himself in order to lead the life he wants. First, he convinces Brick to lead a heist string. A man with limited prospects, and sensing a quick bit of silver to be made, the bouncer agrees. The poet Glum, experience as a lockpicker being a signigicant part of his resume, is brought on, as well as another Haptha, an old criminal associate of Shib’s named Nahl. Brick is uncertain of his inclusion, but he is a talented wall-climber, and like all his race, large and tough; a worthy asset in any fight.

The most important member of the team is Dahlia, Vawn’s bodyguard. First, Shib plays on her irritation with Vawn’s constant belittling of her religious beliefs. Secondly, he persuades her that no one should get hurt, and her employer’s losses will be slight.

Switching from character to character, Lizzi builds his story from multiple perspectives. This gives the reader to see events from each of the players — Brick, Dahlia, Shib, and Glum — perspective. Each one’s inner workings are put on display in great detail. As things unravel in the aftermath of the crime, we get to see how motives shift and plans change from inside everyone’s head.  Much of the story’s tension comes from the their constant efforts to stay ahead of each other’s plotting.

While it may not match The Killing’s level of failure (this misadventure is less spectacular, for one thing, and Brick is more self-aware than Sterling Hayden’s Johnny Clay), the heist in Thick As Thieves approaches it. Although the burglary goes well in the beginning, it ends with the senseless murder of a guard. At once, two of the crew decide Shib’s agreed-upon pay is insufficient. The lure of more money leads Nahl to break his contract. Unaware of its magical ineffectiveness, Glum is intent on keeping the supposedly mighty Periapt for his own. By the end, a number of the thieves will have been ushered into the next world and a demonic power will have been unleashed.

When I realized Thick As Thieves wasn’t going to be an action/adventure story but instead a caper novel (though it is plenty exciting), I was sure I wasn’t going to be happy. I’m quite fine with caper stories, but it wasn’t really what I was in the mood for. Very quickly, Lizzi’s writing overcame my hesitancy. I don’t know if this was his intention, but he’s succeeded in creating a low-key crime story (with demons and non-humans) shot through with just a tinge of existential fear. The crime itself is inconsequential — no one, not even Shib, is going to get rich off its proceeds. That it almost petty is of no matter, each of the players is depending on its success to make their lives better. No matter what they do, neither Brick nor Dahlia is able to really effect events. Once they agree to steal for Shib, they’re both carried along by events outside their control. In the end, only the person who started the story with wealth and power still posesses wealth and power. One of the primary ingredients of swords & sorcery is the ability of the hero to wage war successfully on the world hemming him in and holding him down. This doesn’t happen here, and I found it fascinating, as well as expertly done.

In most other books, Brick and Dahlia would be tougher — heck, Brick doesn’t even know how to use a sword, he was a spearman in the war — than their opponents. That doesn’t happen here. Without ever succumbing to the easy blandishments of grimdark’s cyncism and hopelessness, Lizzi’s written a story that rings truer to “real life” than any fantasy story I’ve read in ages. There’s a realism on display — especially the discussions of economics (something most fantasy writers seem woefully inept at) — that far outshines much of what passes for such these days.

There’s also a fair bit of good worldbuilding in Thick As Thieves. In particular, we learn how, during the Merchants War, the human forces attempted to summon demons to fight the Haptha. It succeeded rarely — not in the summoning, but in the commanding. Demons were as likely to ravage the human armies as the Hapthas’. Then there is the proliferation of human cults and sects. Even in a town as provincial as Kalapo one can find Four-Fold Soteriologists, Pontifical Henotics, and the Third Iteration of the Entropic Order. I’m not sure if he really has, but it feels like Lizzi’s actually thought out what each of these denominations, and a dozen others, believes. He’s created a fantasy setting that feels realistic without stripping out or downplaying the fantasy elements.

Thick As Thieves is a solid effort by an author I’ve read and reviewed before. If you have a taste for harboiled fantasy, I believe you will enjoy this one.

We’re told not to respond to bad reviews. But what about positive ones? I’ll risk committing a potential faux pas and say “Thank you, Fletcher, for your kind words.”

Nice review… but any insight into the beer on the cover? Or is that a critical plot element (in which case, no spoilers)?

Mick, I haven’t spoken with the cover artist so I cannot provide a definitive answer. But a good proportion of the action does occur within a tavern. My original conception of the cover was a depiction of the tavern sign, a chipped mug. So the actual art provides a certain conceptual continuity.
I think there is something about the fantasy genre that lends itself to tavern settings. I won’t plunge into an exegesis on that topic; I’m sure we can all come up with examples and construct theories.

I Now Pronounce You…Whatever Pops Into My Head | Ken Lizzi

[…] to think the book isn’t too bad; if you’d like a couple of opinions less biased than mine, try here or […]