The Priests of Rathma — or necromancers, as outsiders call them — have long remained shrouded in mystery. Deep within the jungles of Kehjistan, they train to preserve the delicate balance between the forces of life and death. Now Sanctuary has need of their unique power, and the Priests of Rathma will answer. (src)

Diablo is one of the most beloved and revered game series. The hack and slash Role Playing Game has defined the roguelike genre of video games for over 20 years. Rise of the Necromancer is the second expansion for Diablo 3, resurrecting a popular hero last seen in Diablo 2.

Traveling from the eastern jungles of Sanctuary, the Necromancer, as a member of the Cult of Rathma,  has sworn to preserve the cycle of life and death. Since the arrival of the falling star, the dead have risen in great numbers and threaten to destroy all life. The Necromancer, with powers thought to be horrific by most mortals, understands the true threat to life, the overwhelming numbers of the dead. Due to this imbalance, the Necromancer is sent by his master to join the fight against the Lords of Hell.

Upon starting a new game, you begin with only one skill, a primary attack, Bone Spikes. Bone Spikes attacks your enemies by ripping the bones of the dead from the ground to pierce your enemies from below. Leveling up will unlock other skills. Each skill has 5 skill runes. Skill runes augment the skill in different ways, often changing how you use that skill through new abilities. Most skills cost Essence to cast. Essence can be gained through your attacks against the living and the dead.

As you level up, you will increasingly unlock other skills, skills sets, skill runes, and passive skills. All skills that unlock are based on your character’s level. Your character can ultimately reach level 70, but after level 70, you can earn paragon points. 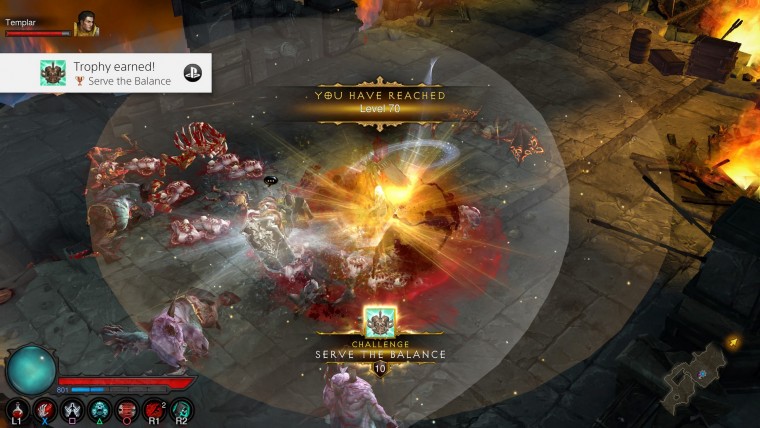 In addition to Bone Spikes, your other primary attacks are:

The Corpse skills set uses corpses as weapons or replenishment.

The Reanimation skill set raises the dead to join you in battle.

The Blood and Bone skill set contains  a mix of abilities that don’t quite fit the other categories.

Passive Skills are ongoing skills that accentuate you or your skills in a variety of ways. As you level up, you will unlock 4 passive skill slots and 20 possible passive skills. A few examples of the Necromancer’s passive skills are:

The Necromancer is a fun character to play. All of the powers are unique and balance together well. Diablo 3 allows you to build your character to match your gameplay. By mixing and matching your preferred skills, weapon and armor bonuses, skills and skills runes, you are able to create a powerful Necromancer.

A large part of the fun in the game is in the game loop. Fight enemies, gain loot, level up. This game cycle creates an environment that regularly rewards the player during game play. You never know what incredible piece of armor or weapon you will gain fighting an enemy, or the new and unique skill that you unlock. After leveling up a few levels, almost every piece of loot includes some sort of bonus, such as armor +20 against fire damage. As you level up your loot will have multiple bonuses. You will also find legendary items which are extremely powerful and contain incredible bonuses.

In one of my character builds, my Necromancer has a legendary ring named “Nagelring.” 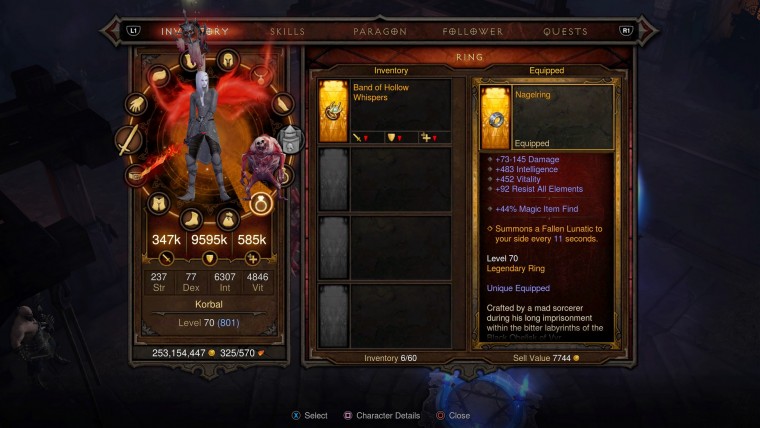 Nagelring has the ability “summons a Fallen Lunatic to your side every 11 seconds.” This ability adds Fallen Lunatics to my party. In my current party, I have a Blood Golem, a half-formed Golem pet, a Templar follower, and 4 Fallen Lunatics.

In addition I have a legendary sword named “Maximus.” 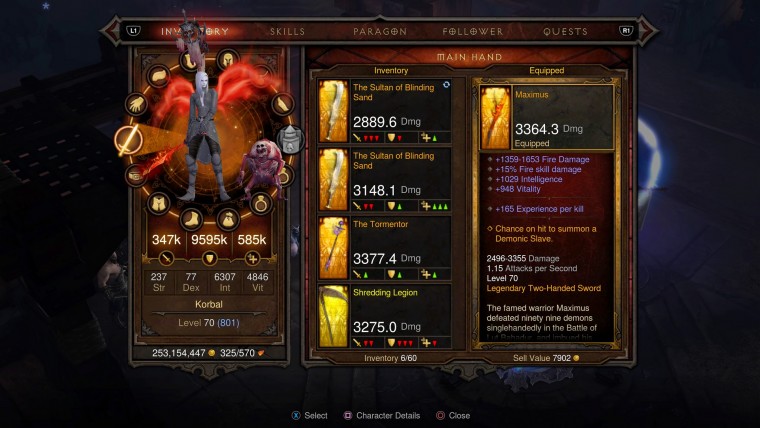 Maximus has the ability “chance summon a demonic slave.” Periodically, as I am attacking enemies, a giant demon will spawn, lit with blazing fire, and attack enemies. The demon is chained to my character and attacks enemies with a large blazing fire sword. Including summoning skeletal mages, the party becomes larger, making for more chaos and more fun.

The downside is that with so many party members during massive battles the screen becomes quite clogged, making it difficult to see all of the action. Happily, I haven’t seen any lag or slowdown onscreen during these battles, even when fighting over 40 enemies simultaneously.

Visually, the necromancer has an authentic look to the character. The male and female characters look as close to death as possible with very pale skin, goth style clothing and interesting verbal responses during play and when speaking with other characters.

Diablo 3 is displayed in an isometric view, with lush, detailed backgrounds that are beautifully colored. The visuals accurately portray the bleak world of Sanctuary, shown through worn stone floors in structures, cracks on the desert ground, and unrelenting snow during the defense of a castle. The world of Sanctuary is represented beautifully, with great attention to detail.

The story of Diablo 3 is told in many ways, through videos, character interactions, and lore found in loot caches that are read to you verbally while you play. Overall the story is solid, with some intriguing twists.

The Rise of the Necromancer expansion isn’t without controversy. The cost to purchase the expansion is currently $15. Some critics have voiced their opinion that the price is too high.

Some critics feel that the Necromancer’s abilities are too similar to the Witch Doctor’s. While their powers may be similar (Witch Doctors can summon zombies, bats, and turn enemies into chickens) I feel the powers differentiate enough to separate the characters.

If you can look past those potential negatives, I believe that you will find that the Necromancer is a fantastic character addition to Diablo 3. Diablo 3 is a fun and enjoyable game in its own right, but the Necromancer’s powers and abilites create new gameplay opportunities that feel fresh and exciting.

Matt Drought lives in Milwaukee. His last article for us was Axiom Verge: Retro Gaming At Its Finest.