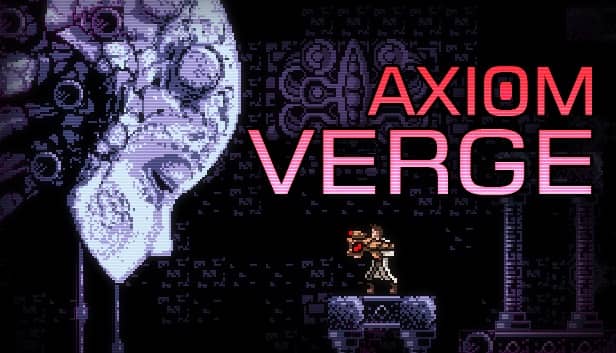 Over the past few years retro-gaming has been on the rise. From the NES Classic, to the upcoming AtariBox, many companies are releasing games and devices that pull at your nostalgia, allowing you to relive some of the gaming moments from your past.

Along with retro gaming, indie game development has rocketed over the past few years. Independent game developers with small budgets and small teams are creating new games and experiences in a variety of genres, leading to the creation of compelling stories and incredible pieces of art.

In 2015, Thomas Happ created a sci-fi game that matched the wonder and exploration of a nearly bygone era. An era of 2 dimensional side scrolling games, featuring exploration, with an emphasis on combat, puzzle solving, and powerups.  This game is called Axiom Verge.

Axiom Verge features many of the game mechanics from classics such as Zelda, Castlevania, and Metroid. This game and many others similar to it are often categorized as a “metroidvania” game. The comparisons between Axiom Verge and Metroid are more than a subtle nod, with the difference being Axiom Verge takes those ideas and expands on them.

You begin the game with the protagonist, Trace, a human from Earth. You witness Trace sustain a major injury in a lab experiment and watch as he awakens in an alien world named Sudra. His awakening introduces you to an alien that begins to guide you in this new and hostile world. The alien expresses that you are the only hope to stop Athetos, a powerful and deranged scientist that destroyed their world. The alien informs you that the lack of your intervention will lead Athetos to become more powerful and destroy other worlds. 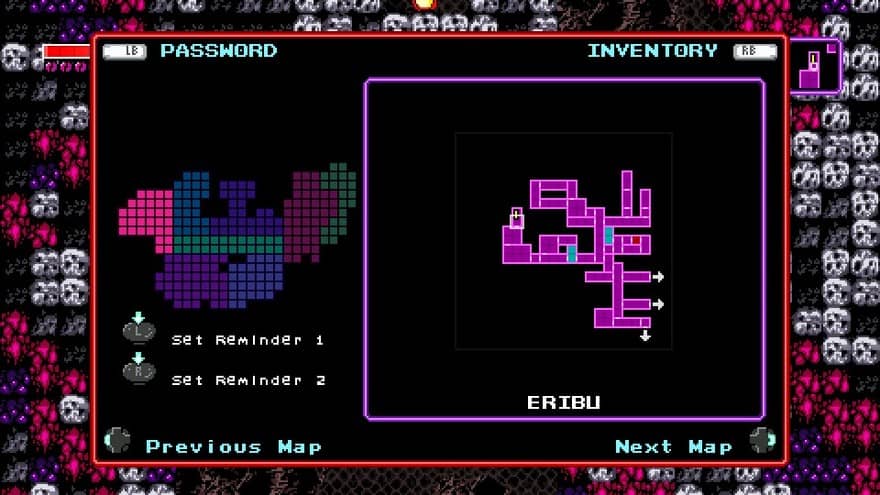 The world of Sudra is split up between different areas, each of which contain different enemies and setting than the others. The areas have a plethora of discoveries to find, weapons, upgrades, and powerups. These discoveries are crucial to your success in playing the game and progressing through the world.

You begin to explore Sudra by passing through different rooms, displayed in a retro style, akin to the 8bit and 16bit era of games, only with much higher visual fidelity. The graphics capture the feeling of being in a sci-fi world, enhancing the story with visual story telling. The colors truly pop, making the game a visual wonder.

The game controls are relatively simple, left/right and jump. You jump on ledges to ascend a tall room, or drop down to descend. You are able to aim your weapon at a 45 degree angle, up, or down (if you are falling or aiming down as you jump). One of the control features is the ability to “lock” your aim. Locking your aim allows you to fire your weapon on an angle or straight up, while preventing you from moving your character, which can spell doom in the middle of a firefight.

With a game controller, there is a quick select option in choosing which weapon you wield. This is performed by simply using the right joystick to bring up a wheel displaying the weapons in a circle, then spinning the joystick to select the one you want to use. The game will pause in the background while you change weapons, ensuring that you’re not defeated during this action. 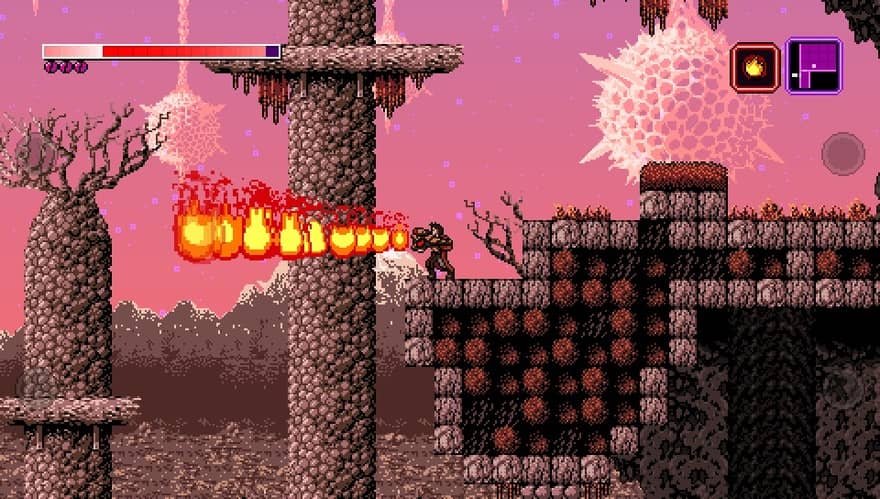 The weapons you gain as the story progresses are often used for more than defeating enemies, and discovering those uses is very satisfying. You start with the Axiom Disruptor, a pedestrian gun that allows you to fire at enemies. As you progress, you will find other weapons such as the Kilver, a lightning shotgun, the Firewall, a flame grenade launcher, and the Reflector, a large sized projectile that bounces of walls.

Upgrades introduces you to new tech that gives you interesting powers and abilities. A few of these upgrades are, a Modified Lab Coat that allows you to teleport through walls, a Remote Drone that allows you to explore small areas, and an Address Disruptor that allows you to glitch enemies or create blocks to jump on. You will be surprised at the sheer amount of upgrades you gain , and of the unexpected ways you can use these upgrades. Upgrades often aid in your traversal through the world, and are especially useful to gain powerups. 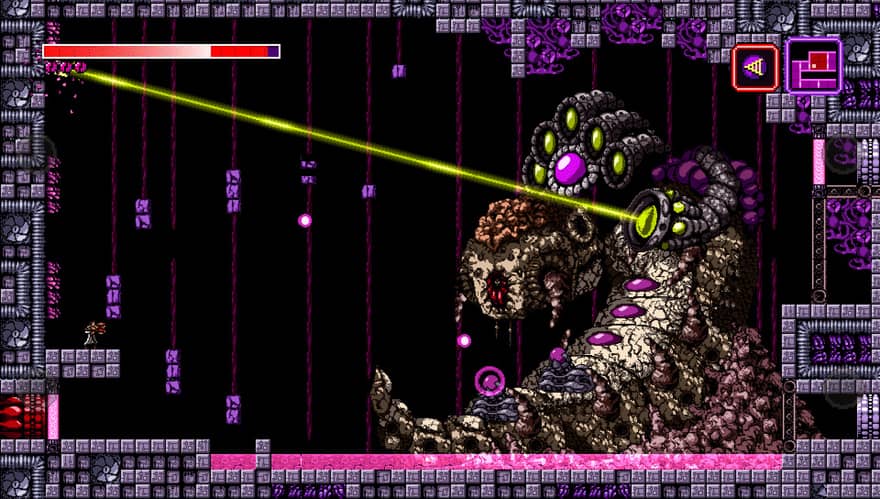 The Boss battles vary in their difficulty, some are harder than others, but overall they can be won through knowing your abilities and using them to win. Many times when facing a Boss, you need to learn how to defeat them by learning their attack patterns. You will die, but after some tries, you will be able to determine the best way to defeat them, oftentimes by a narrow margin.

The game as a whole falls in the middle of the spectrum of difficulty. As you traverse the world of Sudra, you will encounter many enemies. Some of the enemies will have interesting characteristics and will require some research on how to defeat them. Other enemies will feel somewhat cheap, attacking you quickly and without warning, chipping away at your precious health. These enemies don’t hurt the overall experience, they just become a nuisance when you are traveling through an area, low on health, trying to get to the next save point.

The story is well told, even through the shortcomings of solely using narrative text boxes. The story takes some interesting twists and turns, surprising the player with the motives of the antagonist. Without spoiling the overall narrative, I feel that the story matches the feel of the game and leaves the player satisfied.

Axiom Verge is a blast to play. It is worthy successor to carry on the mantle of games past. Journeying through the world of Sudra, fighting enemies, exploring new areas, and gathering new weapons with different powers is very enjoyable. The game challenges you to survive this world filled with enemies and traps trying to kill you, and leaves you with a sense of accomplishment, especially after defeating a particularly hard Boss. As a sole developer, Thomas Happ has created a game that brings the player in with great gameplay, an interesting premise, and a fantastic soundtrack.

Axiom Verge is available on a variety of platforms, PC, PS4, Xbox One, OSX, Linux, Playstation Vita, Wii U, and this month on Nintendo Switch.

Matt Drought lives in Milwaukee. His last article for us was Microsoft Xbox One vs PS4 Pro.

The term “retro-gaming” would mean, to me, the Parcheesi board game. The stuff you talk about here is incomprehensible.

I’m down. NES was the system of my youth, so I get this exactly. And the last video game I played through (don’t ever intend to sink into any others was Zelda: Ocarina of Time.

Definitely picking this up on the Switch in the deluxe edition coming out next month. Love the music, as well. It’s Metroidesque, but still its own thing.

I definitely want to check this one out soon.

I just finished this one called Hollow Knight and it’s remarkably excellent. Highest recommendation for that one.

Thanks for reviewing this game here.

I’m wild for Axiom Verge and the expansion on “Indie” games as major players slowly slide with the latest FPS.

It’s an amazing work for so small an operation. IMO its not a tribute to Metroid but what Metroid SHOULD have been…

To Andy – Like Aquaria too! That’d be a neat review for here. The story and the music.