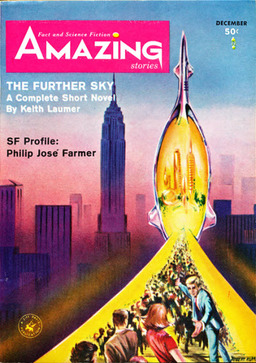 The cover to this issue is by Robert Adragna. Interiors are by Adragna and George Schelling. The editorial concerns Sam Moskowitz’ series of Profiles of SF writers, and signals a change to essays by Moskowitz addressing SF’s treatment of certain themes, beginning in this issue with a discussion of Philip Jose Farmer and — you guessed it! — sex and SF.

The article — a fairly long one — begins with a review of some of the SF stories that occasioned controversy by brushing up against sexual issues, and continues with a detailed look at Farmer’s career to date (1964), including of course the controversy surrounding “The Lovers,” but also mentioning I Owe For the Flesh, the first version of To Your Scattered Bodies Go, which had been written for a contest in the early ’50s, and won, and was lost (I understand) after the contest sponsor (Shasta) ran out of money. On the whole, it’s an interesting and worthwhile piece, one of the better things I’ve seen from Moskowitz.

Robert Silverberg’s book review column covers Alfred Bester’s collection The Dark Side of the Earth, Fritz Leiber’s novel The Wanderer, and The Astounding Science Fiction Anthology, edited by John W. Campbell, Jr. Silverberg approves of all three books, and reserves especial praise for The Wanderer — a book which, I would suggest, has not retained much of a reputation (I myself have not got through it on two tries, though it has been a long time, and I suppose I should give it another chance.)

Laumer’s novella is curious and rather a mess. It’s a Niss story, though to my taste it doesn’t mesh well with the other Niss stories I’ve read. It concerns Amory Vallant, who meets an old man who claims to know him on Niss-dominated Earth, and further claims to have known Amory when he was in the Navy — but Amory has never been in the Navy. Before long Vallant has encountered Jimper, a tiny humanoid who tells him of his land on Pluto. Vallant is confused but before long is forced to kill a Niss, and he and Jimper end up on the run, head for Pluto and Galliale and a strange mystery. It’s obvious that time travel is involved, and Laumer sets that aspect up reasonably well, but on the whole the story is too implausibly convoluted to really hold together.

Young’s “Quest of the Holy Grille” is about sentient cars. And I found it extremely stupid. Housing is an innocent — or one might say moronic — car that believes in the legend of the Holy Grille, a component of the original Deerborn* manmobile that has been lost, and that if restored will make manmobiles better. Housing is a prig, and thus is offended at his palhicle Axle’s interest in girlhicles… But then they arrange to run off tothe rumored home of the Holy Grille… All this is presented as arguably them rationalizing their part in a couple of kids joyriding or running away… Anyway, it all ends tragically — but I couldn’t take it seriously.

*Surely this should be spelled “Dearborn”?

James R. Horstman is one of two very Little Known Writers in this issue. “The Last of the Great Tradition” was his only appearance in the SF magazines. It’s actually a pretty amusing little piece, about a con man promoting the message of the Saucer People… and what happens when a real alien is part of his audience.

Likewise “The Day They Found Out” is the only appearance I can find of the byline Les Dennis. It’s a kind of horror story, about Recognition Day, which apparently is prescribed for grade schoolers in this particular society. The story presents a teacher as he performs his duties for that day. The ending is supposed to be a great shock, with a moral of course — and I admit it seemed strained to me.

Arthur Porges was a pretty reliable writer of mordant little tales. In “The Moths”, a disaffected alcoholic scientist discovers a special mutant strain of moths, that is drawn to flame but can consume it — possibly this can become a source of energy for the world? But what is the world to this drunken old man?

Rich Horton’s last Retro Review for us was the July 1964 issue of Amazing Stories. His website is Strange at Ecbatan

As always, I’m grateful for these thoughtful brief takes on 1960s Amazing and Fantastic issues — the latter especially. They help us to understand the situation for readers of fantasy in the years immediately before the Ace and then Ballantine editions of Tolkien appeared, prompting publishers to see fantasy as a market (with the good and the ill consequences thereof).

There must be many sf consumers now who have never heard of Laumer. I have read, so far as I know, only one thing by him — his first novelization of the TV series The Invaders — and I don’t suppose his work deserves revival. But it was something to be reckoned with back then.

I suspect the time has likely passed for a Laumer revival. Baen Books brought a lot of his best novels and stories back into print in omnibus editions (most edited by the prolific Eric Flint) between 2002 and 2012. A handful of them are still in print, Like A Plague of Demons & Other Stories and Imperium. Sadly, Legions of Space, which collects the novels A Trace of Memory (1963) and Planet Run (1967) and several short stories, is not. 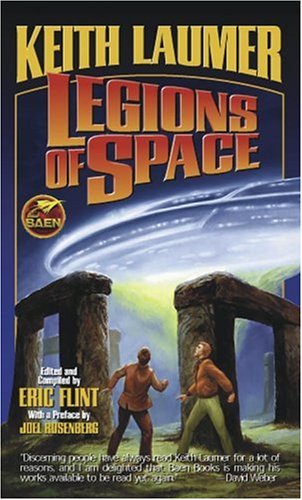