We’re living in the age of fake news. The Internet abounds with sites reporting child abuse rings hidden under pizzerias, skeletons of giants excavated in Israel, and cures for AIDS being suppressed by Big Pharma.

Just recently I got taken in for a minute by the reported death of Desmond Tutu shared by a Facebook friend. That story was on a plausible-looking African newspaper site. Only after I looked around the site did I realize it was the only story on it and the newspaper didn’t exist. Roll eyes. Run virus scanner.

But fake news isn’t new. In previous generations even the mainstream press regularly used it to boost sales, running outlandish stories to sell papers. Perhaps the most famous is the story in an 1890 issue of the Tombstone Epitaph about cowboys shooting down a pterodactyl, which led to the theory that it was the legendary Thunderbird and the creation of several faked photos. Other writers have created various fake stories to boost sales for their own newspapers.

One of these writers was no less a literary figure than Edgar Allan Poe.

Like many writers, Poe always struggled to make ends meet. His now-famous tales of terror were critically acclaimed but did not bring in enough money to support his wife and his drinking habit, so Poe often worked for newspapers to earn a reliable if modest income.

In 1844 he was working for the New York Sun, and penned a front-page story for the April 13 issue trumpeting a new scientific wonder — the crossing of the Atlantic in three days by balloon. The story breathlessly related how a crew of eight men, including William Henson and Monck Mason, both well-known aeronauts, and famous British novelist Harrison Ainsworth, traveled in a powered balloon from England to Charleston, South Carolina, in 75 hours. The article went on to give various technical details. 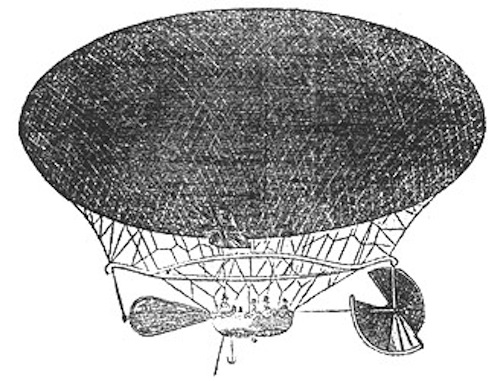 This balloon did not cross the Atlantic

Composed of silk, varnished with the liquid gum caoutchouc. It is of vast dimensions, containing more than 40,000 cubic feet of gas; but as coal gas was employed in place of the more expensive and inconvenient hydrogen, the supporting power of the machine, when fully inflated, and immediately after inflation, is not more than about 2500 pounds… Beneath the centre of the balloon, was a frame of light wood, about 9 feet long, and rigged on to the balloon itself with a network in the customary manner. From this framework was suspended a wicker basket or car.

The flying machine was propelled by an Archimedean screw fitted to “a piece of spring machinery fixed in the car. By the operation of this spring, the screw is made to revolve with great rapidity, communicating a progressive motion to the whole. By means of the rudder, the machine was readily turned in any direction.”

The article included the journal of the aeronauts, relating how on their first morning they quickly rose to 15,000 feet and soon passed over the Bristol Channel. They then descended and dropped a couple of buoys into the water on the end of ropes. These held them at a fixed altitude. The original idea was to fly to Paris, but a mechanical failure and a strong wind took them out over the Atlantic. At this point the crew decided to take advantage of the wind and head to the United States.

Soon they fixed the propeller and were traveling “with a velocity nearly inconceivable.” Ainsworth noted on the first night,

In view of such a gale the broad Atlantic becomes a mere lake. I am more struck, just now, with the supreme silence which reigns in the sea beneath us, notwithstanding its agitation, than with any other phenomenon presenting itself. The waters give up no voice to the heavens. The immense flaming ocean writhes and is tortured uncomplainingly. The mountainous surges suggest the idea of innumerable dumb gigantic fiends struggling in impotent agony. In a night such as is this to me, a man lives — lives a whole century of ordinary life — nor would I forego this rapturous delight for that of a whole century of ordinary existence.

Beyond this bit of poetry the journal had little to relate. The crossing of the Atlantic proved to be quite simple and the aeronauts predicted it would become commonplace. The journal closed with a triumphal note: “We have crossed the Atlantic — fairly and easily crossed it in a balloon! God be praised! Who shall say that anything is impossible hereafter?”

Amazing stuff, but completely untrue. Poe had made it all up, adding a some real people and a bit of technical detail for verisimilitude.

The public lapped it up. The story became the talk of the town and eager crowds gathered outside the Sun’s offices. Poe recalled, “I never witnessed more intense excitement to get possession of a newspaper.”

The mails from the South last Saturday night not having brought a confirmation of the arrival of the Balloon from England, the particulars of which from our correspondent we detailed in our Extra, we are inclined to believe that the intelligence is erroneous. The description of the Balloon and the voyage was written with a minuteness and scientific ability calculated to obtain credit everywhere, and was read with great pleasure and satisfaction. We by no means think such a project impossible.

Hey, if the story is believable and everyone is entertained, what’s the problem? How very Internet.

The full text of the Poe’s balloon story can be read here.

During his tenure as a reporter for the Territorial Enterprise, Mark Twain published many self-admitted “outlandish hoaxes.” These included a “Bloody Massacre” near Carson city that never took place, and a petrified man found thumbing his nose at the desert.