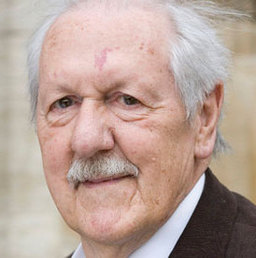 Brian Aldiss, one of the most brilliant and acclaimed science fiction authors of the 20th Century, produced more than 80 books and some 40 anthologies in a career spanning more than six decades. His first publication, the short story “Criminal Record,” appeared in the July 1954 issue of John Carnell’s British SF magazine Science Fantasy, and his recent anthology The Folio Science Fiction Anthology, was published just last year.

Aldiss’ groundbreaking SF included the novels Non-stop (1958), Hothouse (1962), The Dark Light Years (1964), Barefoot in the Head (1969), The Malacia Tapestry (1976), and The Helliconia Trilogy (1982-85). His most important anthologies and collections include The Saliva Tree and Other Strange Growths (1966), Penguin Science Fiction (1961), The Penguin Science Fiction Omnibus (1973), Space Opera (1974), Galactic Empires, Volume 1 & 2 (1976), and six volumes of The Year’s Best Science Fiction (edited with Harry Harrison, 1968-1973). Aldiss received two Hugo Awards, for Hothouse and Trillion Year Spree: The History of Science Fiction (1986) [in his acceptance speech, Aldiss famously held the Hugo high and said “It’s been a long time since you’ve given me one of these, you bastards!”], and a Nebula Award for the novella “The Saliva Tree.” His short story “Super-Toys Last All Summer Long” (1969) was basis for the Steven Spielberg film A.I. Artificial Intelligence.

Brian Aldiss died on Saturday at his home in Oxford. He was 92 years old.

Four years ago Aldiss was the guest on the BBC Book Club and I submitted a question for him (about his novel Greybeard). It was one of the ones chosen to be asked, and the BBC asked if I wanted someone else to read it for me or if I wanted to ask it myself (via phone), even though it meant that I would have to get up at about three in the morning.

A chance to actually talk to BRIAN ALDISS?! I was up at three in the morning. He seemed delighted to be talking to someone from far off California – in fact, he seemed to be even more delighted than I was, which is saying something.

His death is a great loss – he was truly a giant, the closest thing we had today to H.G. Wells.

Does anyone know what happened to the TAPE RECORDING of Aldiss, Kinglsey Amis, and C. S. Lewis discussing science fiction, made Dec. 1962 in Lewis’s rooms in Cambridge?

The transcript has been published various places, e.g. Lewis’s posthumous book Of Other Worlds.

But I have never found out who made the transcription, who owned or owns the tape, etc., and I’d really like to know.

Ah, sad news. I met Brian Aldiss in 2004, when I went to my first Campbell Conference. Brian Aldiss, Harry Harrison, Frederick Pohl, George Zebrowski, and Gregory Benford were all there, with James Gunn, too! It was one heck of a thing.

Honestly, Aldiss was the only one I felt nervous about talking too!

Probably time to dig out my copies of Galactic Empires I & II.

I would love to hear that audio as well. I’ve read that transcript. It gives you the cozy feeling of a few topnotch authors sitting in an Oxford dorm discussing science fiction. It would be great to hear the audio of it!

Yes indeed, James! From the transcript it seems one can hear the sound of drinks being poured, etc. Listening to the recording would be a remarkable “immediate” experience of hearing these lovers of SF talk. But what, what, happened to the tape? It would be great if it could be uploaded to the internet, say at archive.org. Or, if a commercial offering were to be made — I for one would be eager to buy a copy.

You can occasionally find a digital upload from some old recording, like the following:

I did a Blackgate post about this particular recording a few years ago:

Youtube, occasionally, has some old footage from some such things. It’s always interesting to see how much smoking went on at such things years ago.

For the tape, have you tried contacting Magdalene College? They don’t list an Archivist but the College Librarian may know something or be able to point to someone who does…