The Thorn of Dentonhill was Marshall Ryan Maresca’s debut novel. It followed the adventures of Veranix Calbert, diligent college student by day and crime-fighting vigilante by night, in the crime-ridden districts of the port city of Maradaine. It was nominated for the Compton Crook award, but it was the Library Journal‘s pithy review (“Veranix is Batman, if Batman were a teenager and magically talented”) that really piqued my interest.

I featured the sequel, The Alchemy of Chaos, as a Future Treasure in December 2015, and last week I checked online to see if there was news of any new volumes. There are indeed… in the last two years Maresca has produced no less than five novels set in the world of Maradaine, and there’s two more in the pipeline. His Maradaine series has fast become one of the most popular and interesting urban fantasies on the market, and Maresca has responded splendidly to the demands of his fast-growing readership for more. Here’s a quick recap of the series.

One of the more interesting things about the Maradaine series is that, while all the novels share a setting, they’re not all part of the same series. In fact, there are currently three ongoing series set in the same city.

An urban fantasy series that follows the exploits of Veranix Calbert, struggling magic university student by day and armed vigilante by night.

These novels add a layer of mystery. They follow Inspectors Satrine Rainey and Minox Welling, two detectives in the city constabulary who protect Maradaine from crime, both magical and mundane.

The Streets of Maradaine 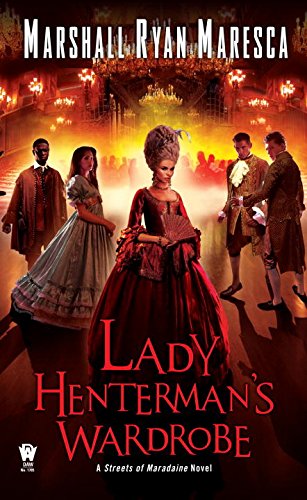 Heist novels at heart, these feature Asti and Verci Rynax, two former thieves who make an effort to go straight, but end up dragged through the ashes of tragedy back into their old lives.

All the novels are mass market paperbacks from DAW, priced at $7.99 for both the print and digital editions. They feature covers by Paul Young.

The books have gradually been getting more attention from the press. Bibliosanctum says of The Thorn of Dentonhill, “Maresca brings the whole package..  an incredible start to a new series, from an author who is clearly on his way to great things,” and the B&N Sci-fi & Fantasy Blog says “Marshall Ryan Maresca is some kind of mad genius…. Not since Terry Pratchett’s Ankh Morpork have we enjoyed exploring every angle of an invented locale quite this much.”

But my favorite review is probably Sam Reader’s recent feature at the B&N Blog on The Holver Alley Crew, which he calls “an Irresistible Low-Fantasy Caper.” Here’s a snippet.

The Holver Alley Crew, which launches a new series set in Marshall Ryan Maresca’s sprawling Maradaine universe, is a perfect caper novel. It’s an enjoyable, fast-paced read, filled with dauntless villains, daring heists, adrenaline-packed fight scenes, and unforgettable characters. Beyond all the adventure and action we can rely on the best of these kinds of stories provide, though, Maresca goes a step beyond, maintaining a such relentless pacing and precise timing that it’s nearly impossible to find a good place to stop reading… The result is a glorious riot of high adventure and low cunning, fast, furious, and most of all, fun — something all too often in short supply in grimdark low fantasy books and crime fiction alike…

That breathless, nervy energy begins with a scene of the brothers helping their neighbors escape from a devastating fire, and ramps up from there, flinging the cast into one scrape after another as they move from heist to heist. The set pieces are ridiculously entertaining to read, from a brutal fistfight inside the ruins of the Rynax Gadgetorium; to an attempt to break into the paranoid haven of the brothers’ former fixer; to the climactic heist, a multi-leveled, multilayered affair set in a crime lord’s pleasure palace…

The Holver Alley Crew is the most recent book in the series; next is the upcoming third installment in the Veranix Calbert trilogy, A Murder of Mages, due in November. It will be followed by the sequel to The Holver Alley Crew, Lady Henterman’s Wardrobe (March 2018).