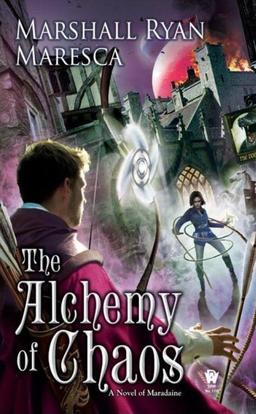 Marshall Ryan Maresca’s debut novel, The Thorn of Dentonhill, followed the adventures of Veranix Calbert, diligent college student by day and crime-fighting vigilante by night, in the crime-ridden districts of the port city of Maradaine. Library Journal said, “Veranix is Batman, if Batman were a teenager and magically talented,” and that’s not far off. Now comes word that the seqel, The Alchemy of Chaos, arrives from DAW in February, and I’m very much looking forward to it.

Veranix Calbert is The Thorn — the street vigilante who became a legend to the people of Maradaine, especially the gangs that run the neighborhood of Aventil. The Thorn continues to harass Willem Fenmere, the drug kingpin of the Dentonhill neighborhood. Veranix is still determined to stop Fenmere and the effitte drug trade, especially when he discovers that Fenmere is planning on using the Red Rabbits gang to bring the drug into Aventil.

But it’s also Exam Week at the University of Maradaine, where Veranix is a magic student. With his academic career — and future as a mage — riding on his performance, Veranix needs to devote himself entirely to studying and participating in a fellow student’s thesis experiments. There’s no time to go after Fenmere or the Red Rabbits.

Then a series of strange pranks begin to plague the campus, using a form of magic that Veranix doesn’t recognize. As the pranks grow increasingly deadly, it becomes clear that there’s someone with a vendetta against the university, and The Thorn may be the only one capable of stopping them. Between the prankster, the war brewing between the Aventil gangs, and the flamboyant assassins Fenmere has hired to kill him, Veranix may end up dead before the week is out. Which just might be preferable to taking his exams….

Maresca’s second novel, A Murder of Mages, began a second series set in Maradaine. The sequel, An Import if Intrigue, the second novel of The Maradaine Constabulary, is coming Fall 2016.

The Alchemy of Chaos, the second volume of The Maradaine Series, will be published by DAW on February 2, 2016. It is 400 pages, priced at $7.99 for both the print and digital versions. The cover is by Paul Young.

[…] in the short term, what’s to come is The Alchemy of Chaos.  Black Gate is already excited for it, and I hope you will be as […]