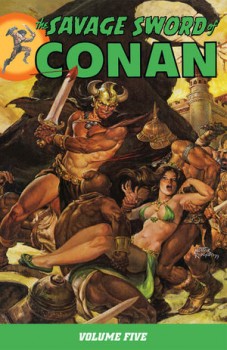 Volume 5 collects issues #49 – 60 (1980 -’81), and it begins with the proverbial bang. Reigning art champs John Buscema and Tony DeZuniga return for a 4-issue adaptation of the L. Sprague DeCamp/Lin Carter novel CONAN THE LIBERATOR. These four issues are gorgeous–the Buscema/DeZuniga team is firing on all cylinders.

Story-wise this adaptation succeeds far better than the previous DeCamp/Carter adaptation, CONAN THE BUCCANEER (collected in Volume 4). Whereas BUCCANEER tended to meander and lack proper pacing, LIBERATOR moves at a brisk pace and gives us more classic Conan time.

LIBERATOR is basically a military fantasy with bit of sorcery thrown in to complicate the saga of Conan’s revolt against a mad tyrant. We have a beautiful spy, a scheming wizard, and a truly insane king who butchers his own subjects in a futile quest for immortality. Here is the story untold by Conan creator Robert E. Howard: The story of exactly how Conan became King of Aquilonia. 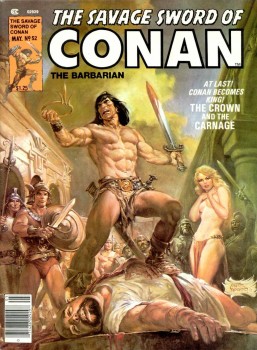 Roy Thomas and his number one art team deliver a masterful saga with four flawless issues in a row. These issues actually form a perfect prequel for Marvel’s KING CONAN comic book, which begins with Conan already on the throne–as did some of Howard’s best stories.

Throughout this fifth volume (as in previous volumes) Dark Horse has interspersed a number of excellent pinups that appeared in the various issues. Most of these in volume five are homages to Frazetta by the incomparable Tony DeZuniga, but there are also fascinating pieces by Ernie Chan, and a rare self-inked Buscema piece, and many others. There really should be a prestige collection of all DeZuniga’s Conan pinups. He, more than any other artist except maybe Neal Adams, comes closest to Frank Frazetta’s iconic version of the Cimmerian.

Barry Windsor-Smith and later Big John Buscema set the model for Conan’s look in color comics–and they did their own thing. But DeZuniga is obviously drawing on the work of the Great Fraz, since all of his pinups have that Frazetta flavor–some of them direct homages–yet without actually aping Frazetta’s style. 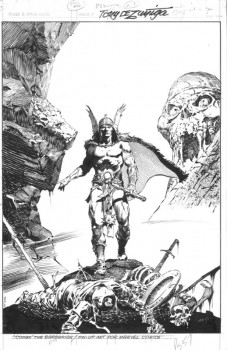 DeZuniga studied what Frazetta did, absorbed what Buscema did, and created one of the most powerful versions of Conan that comics has ever seen. Not so surprising from the artist who co-created DC’s legendary “weird west” hero JONAH HEX. Kudos to Dark Horse for including all these original pinups in the reprint collections. Seeing various artists’ interpretation of Conan was part of the fun of buying an issue every time. Each one is a glimpse into an untold Conan adventure.

Next up in the fifth SSoC collection is #53, an issue close to my heart. I was 10 years old when I “scored” this issue with its suberb Earl Norem cover. Norem had a gift for making the fantastic look believable. A new story begins in this issue, as Buscema teams with guest inker Rudy Nebres for the first of three issues adapting Andrew J. Offutt’s CONAN AND THE SORCERER. Nebres’ inking is as meticulous and detailed as Alfredo Alcala’s early work on the series. Yet Nebres also brings a new flavor to the book with his Alex Nino-style brushwork.

In the collected edition it seems like the original art pages of #53 must have faded quite a bit. The reproduction here isn’t terrible, but it’s definitely flawed. Where the ink should be black it’s grey instead–a problem only seen in this issue. This creates an (unintentional) misty or lucid effect–as if these pages are fading into nothingness right before your eyes. I wonder if some kind of digital restoration should’ve been done on this issue before going to print–simply to darken the ink that is dark no longer.

The story involves Conan robbing a wizard of Arenjun, getting his soul trapped inside a magic mirror, and stumbling into a plot involving the Khan of Zamboula and a gaggle of murderous thieves. Unfortunately, this adaptation is imperfect, flawed by the oldest of comic-book dooms: A change in art teams after the first issue.

Issue #54 sees Ricardo Villamonte jump on board for the final two issues of the SORCERER adaptation. Villamonte’s style is heavy on the blacks and richly executed in its own way, but it’s a jarring change from Nebres’s ethereal and intricate style. Issue #55 finishes the adaptation of Offutt’s first Conan novel so that #56 can tackle his next one: CONAN AND THE SWORD OF SKELOS.

The SKELOS adaptation is a return to brilliance for the magazine. The unbeatable Buscema/DeZuniga art team delivers three stellar issues, creating one of the single best non-Howard novel adaptations of them all. In this story Buscema does something he’s never done before: He returns to the classic Barry Windsor-Smith Conan design, established by BWS in the CONAN THE BARBARIAN color comic in 1970. 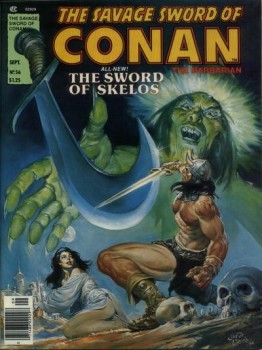 Conan once again wears the twin-horned war helm and three-disc necklace that BWS created to introduce the Cimmerian to comics. It’s quite a thrill for me to see Buscema paying homage to Smith’s foundational CONAN work. Why did he do it? At first I thought maybe Buscema had simply decided to honor BWS for some reason. But Big John was far too practical for that–everything he drew had a reason and a logic behind it. I later realized that the three-disc BWS amulet plays a direct role in Offutt’s story, so it must have been written that way in his novel.

I haven’t read Offutt’s SWORD OF SKELOS, but if anyone reading this has: Can you tell me if Offutt’s prose also describes the horned helm in detail? (If you can, please reply in the comments.) I’m dying to know if Buscema also threw in the BWS-style helmet because the script called for it. It’s a minor detail, but it’s the kind of thing Buscema fans love to go on about.

The three-part SWORD OF SKELOS adaptation marks the last great run of the magazine’s Golden Age, and the end of DeZuniga’s amazing partnership with John Buscema. Tony wouldn’t return to ink another issue of SSoC until #171, nearly ten years later. What you have here in this collection is literally the “end of an era.” 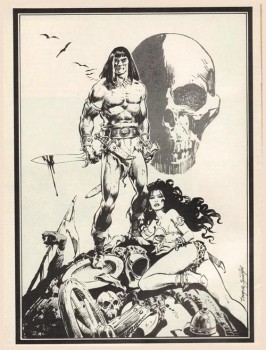 There are two more issues here (#59 and 60), both of which are okay but read like “filler” issues. Buscema doesn’t even pencil #59, but is replaced by guest penciler Mike Vosburg–who has the benefit of being inked by the great Alfredo Alcala. Not even a powerhouse like Big John Buscema could go on indefinitely without a break now and then.

The issue is pretty to look at, and it adapts “The City of Skulls” by DeCamp/Carter with several satisfying moments. Alcala returns to his hyper-detailed brushwork inking, but he also incorporates some of his “gray wash” or charcoal technique. Perhaps this issue was his attempt at blending the two styles he had used in his early issues.

Alcala’s inks make Vosburg’s pencils shine, but there’s really no substitute for the consistency, scope, and vision of Buscema. Something feels “off” here, and it’s simply because Vosburg is playing in The House That Buscema Built. He had titanic shoes to fill, as did anyone filling in for Big John–but there have been plenty of worse issues.

SSoC #60 marks the official end of the magazine’s Golden Age because it’s the last issue where Roy Thomas served as ongoing writer (and basically ran the whole magazine). A by-the-numbers issue penciled by Buscema and inked by Danny Bulanadi, it adapts another DeCamp/Carter story, “The Ivory Goddess.” Not a bad ink job, but compared to the work of giants like DeZuniga and Alcala it simply doesn’t stand up.

(NOTE: The Buscema/Bulanadi team worked much better in color comics, as anyone can see in the issues of KING CONAN they did together.)

Roy Thomas’ 60-issue reign was over. Michael Fleisher would take over as the magazine’s regular writer with SSoC #61. His verbose style was farther removed from Howard than that of Thomas, who had managed to capture quite a lot of Howard’s original flavor in his scripts. I remember as a 10-year-old being upset at Fleisher’s replacing of Thomas–but it was only natural since I was so used to Thomas’ voice.

It’s no exaggeration to say that Roy Thomas WAS the “voice” of all Conan comics, beginning with CONAN THE BARBARIAN #1 way back in 1970. Now at the tail-end of 1981, with Jim Shooter ruling the roost at Marvel, Roy took a step back to let some other writers play in the CONAN sandbox. As for whether that was a voluntary decision? You’d have to ask Roy himself.

SAVAGE SWORD OF CONAN couldn’t be stopped by the removal of its founding writer/editor. It powered on through the next decade with an array of established and new talent, and Roy Thomas came back now and then to weave some new narrative spells. Those of us who had grown up with Thomas, Buscema, Alcala, DeZuniga, and Chan would be very hard to please when it came to other creators.

John R. Fultz is the author of several novels including The Testament of Tall Eagle and the Shaper Trilogy: Seven Princes, Seven Kings, and Seven Sorcerers. His website is www.johnrfultz.com

Thanks for this walk down Memory Lane. Brought back some great memories.

You better not give volume 6 a good review. I told myself I was going to stop at number 5.