Black Gate readers were very supportive when I reported the start of my 2-year experiment as a more present parent and as a full-time writer in June of 2015. I am happy to announce some of the fruits of that experiment 23 months into this leave from work.

First of all, my son is now 12 years old and is a wonderful human being. He cares about others, listens more, has more self-possession and seems successful enough socially that girls keep calling him. I can of course, only take half the credit for that, but even if the only thing I accomplished in the last 23 months was my contribution to raising a responsible person, I would have called it a very successful sabbatical.

However, while he was at school, I went to the library to write or edit, and some good things have come of that too.

Last night, at 7:30pm, 6 May, while I was reading at Ad Astra, Toronto’s premier fan convention, a very dedicated but surely sleepy-eyed gentleman in Oxford was posting the press release announcing my first novel! The world English rights to the The Quantum Magician sold to Solaris Books in the UK in November, via my excellent agent Kim-Mei Kirtland, but the news has been under embargo for the last six months while cover art was being developed by the extremely talented Justin Adams.

The Quantum Magician is an sf heist story, basically Ocean’s Eleven meets Guardians of the Galaxy. I took many of the elements of hard sf and aliens that are found in my short fiction pieces “The Way of the Needle,” “Persephone Descending,” “Pollen From a Future Harvest,” “Schools of Clay” and “Flight From the Ages” and found something I’m really excited about: stealing things. 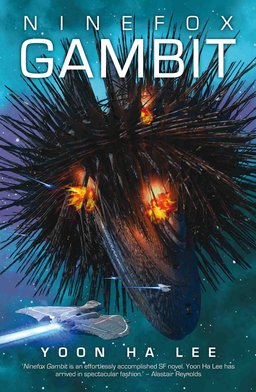 I’m really happy to be with Solaris Books. In case you hadn’t noticed, they also published Yoon Ha Lee’s first and second space opera novels, the first of which (Nine Fox Gambit) has been short-listed for the Clarke, the Nebula and the Hugo. It’s amazing. And it’s available at Audible.com, and wherever books are sold if you aren’t a listener like me. Check it out. Mind-blowing.

And sabbatical-wise, this changes things a bit for me. I’m not an expensive person, and between this advance and a couple other things, I should be able to pay house, food, gas for another year without returning to work. And my son really wants me to take that third year. And so do I, so I started the paperwork to delay my return to work for an additional year.

The Quantum Magician will be in bookstores in October, 2018 and I can’t wait.

I have other news, but it will have to wait. This is what’s de-embargoable right now. And it feels like a giant thing to be able to finally announce that the dream I started when I was 9 or 10 is now coming true. And last night I got to read in front of an audience as a novelist for the first time.

Wonderful all around. Congratulations on two well-fathered years. Your book’s write-up on the Solaris site is pretty delicious. Best of luck with year three!

Thanks so much! Very excited 🙂