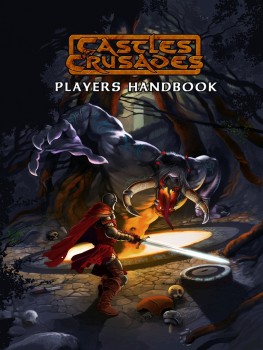 Troll Lord Games has just hit its funding goal for the 7th edition of Castles & Crusades Player’s Handbook, to be released in June of 2017. What’s Castles & Crusades and why should you want it when you have so many other fantasy games to choose from? Take it away, Troll Lords:

You’ll find with C&C that the game is easy to play, but more importantly is its versatility. You can take your house rules and drop them right on top of the C&C mechanic (the Siege Engine) and keep on playing. You are in control. Take the advantage/disadvantage system from 5E and use it with C&C. There’s nothing stopping you.

What’s even better, because the whole game is driven by attribute checks that have only loose guidelines, the game master chooses what attribute check the player rolls. If they want the wizard to swim better, make the character roll an intelligence check to swim the river. It’s your game. Take it.

How does the Siege Engine Work?

It’s fast, versatile and open. Allowing you to make it as complex or as simple as you desire.

I happen to agree with the advertising copy; Castles & Crusades is one of my very favorite role-playing systems because everything discussed above is quite true. 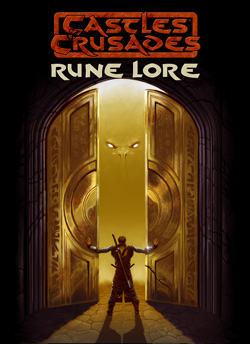 If you’ve been at all curious about Castles & Crusades, it’s a good time to get in. Not only can you snag the new edition of the book for a good price, during the Kickstarter a number of discounts are offered for other books you need — although strictly speaking, all you REALLY need to play are the Player’s Handbook and the Monsters & Treasure books. All else is icing.

We’ve covered Castles & Crusades in the past, and I most recently sang its praises in an article last winter:

Howard Andrew Jones is the author of the historical fantasy novels The Desert of Souls, and the The Bones of the Old Ones, as well as the related short story collection The Waters of Eternity, and three Paizo Pathfinder novels. You can keep up with him at his website, www.howardandrewjones.com, and follow him on Twitter or follow his occasional meanderings on Facebook.

Pledged… the question is, which will hit my physical mailbox first… this? Or Astonishing Swordsmen & Sorcerors or Hyperborea?

HAJ, what’s your favorite icing (if I wanted to up the pledge and get more goodies…)

And while we’re hovering around the Castle… I’m eagerly awaiting the print versions of the Codex Germania and Codex Slavorum; anyone have any idea when those will be out?
-Mick

Hey Mick, not sure when those will appear.

The CK guide has some alternate systems I use, including an alternate mana-based spell system I quite like… but a lot of the text I don’t use at all, so ymmv. Elemental Spells has got exactly what it says in it, some of which are really clever and creative. And I like the class options in Amazing Adventures and the Amazing Adventures Companion. They’re designed originally for pulp characters but they can easily cross over. Great tips in both of those for customizing and tweaking character classes.