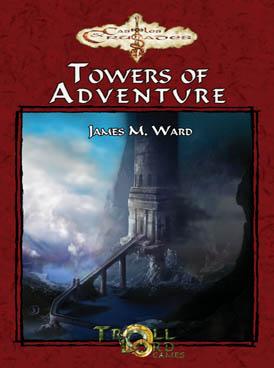 A while back I placed an order with one of my favorite online vendors, FRP Games, whose selection and discounts are both excellent. At the last minute I added an item to my cart that I hadn’t budgeted for: James Ward’s Towers of Adventure, a boxed set for Castles & Crusades from Troll Lord Games.

Not only had I not planned to buy it, I’d never even heard of it until I saw it in FRP’s product newsletter.  What can I say, I’m a sucker for marketing copy:

Towers of Adventure offers the Castle Keeper a marvelous set of interchangeable tower levels, rooms, monsters, NPCs, traps and treasures. This box set allows you to make literally millions of exciting towers for your players to explore. Treasures, tower inhabitants, and tower maps are at your fingers and so easy to use you can put together a complex adventure in five minutes or less.

It’s true!  This isn’t a typical adventure supplement, with a set of interlinked encounters and rooms carefully described for the game master. In fact, while the box contains designs for 15 wildly different towers — including a Zombie Tower, Vampire Tower, Cloud Giant Tower, and Lonely Wizard’s Tower — I couldn’t find a room description anywhere.

Instead, this is more of a toolkit for creating towers on the fly, with nicely detailed adventure hooks, non-player characters, monsters — and of course, treasures and traps. It’s up to you to mix-and-match an adventure hook with a few well-chosen NPCs, and drop them into the Tower of the Great Ape to bring it to life (although really, in the case of “Tower of the Great Ape,” the King Kong remake did all the work for you.)

Typical for Castles & Crusades, the whole thing has an unapologetic old-school air. Don’t look for subtlety (or much plot) in any of the adventure hooks. Rather, expect to lure your players to your Gnome Steam Tower through the agency of their wizard uncle (Hook #1), or a purple teleporting mirror that shows up in their’ “favorite dungeon” (#3),  or a strange treasure map (#9), etc.

I’m not a Castles & Crusades player, but you don’t need to be to get a lot out of the box set.  It’s a fun read, and it captures the inventive and chaotic spirit of the very first Dungeons & Dragons supplements with surprisingly high fidelity. Credit to the splendid artwork for much of that minor miracle. Virtually every page brought back memories of those classic dungeons of old.

James Ward is probably best known as the author of the original Gamma World game (1978) and Dieties and Demigods (1980), not to mention one of those “very first Dungeons & Dragons supplements” I mentioned, Gods, Demi-Gods & Heroes (1976), all from TSR. He was also the lead designer on my all-time favorite computer RPG, Pool of Radiance. But that’s a topic for another post.

I also highly recommend “Engineering Dungeons.” It’s a wonderful little book for crafting dungeons in a very logical and inspirational fashion. Also, it’s basically system neutral, despite it being technically a C&C supplement.

Sounds great! Is it also from Troll Lords? Is it a boxed set, or a book?

Yes, it is also from Troll Lord Games. It’s a 26-paged book (about the size of a module).